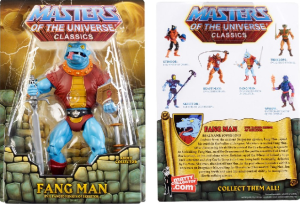 Happy Monday, folks!  It’s been a big and busy week, with announcements, leaks, non-announcements, delays, and weirdness.  So, it’s time to see what’s new in the realm of little plastic guys!  This is going to be somewhat lighter than last week, because I’ve been gone all weekend, and I actually wrote this post on FRIDAY.  If I return on Monday (today!) and see more awesome news, I might do a special post.  Maybe.

*I don’t know if it’s an incredible labor of love or work of obsession, but somebody remade Toy Story using real toys.  This… is kind of scary, honestly. WATCH!

*Pixel Dan and Toy News International are working on THEIR Toy of the Year award, too!  HERE

*And of course, Michael Crawford still has his: HERE

*And just so you know, all those cool Gorewads and Universe of Violence stuff?  They’re going in the DIsney Vault after the end of January, so buy them fast!  But they do have lots of new stuff planned for February – LOOK!  Also, buy the stuff HERE

*So, Matty Collector raised its MOTUC prices to $27.  Counting shipping and tax, I paid $40 for one figure, which is still probably cheaper than on the aftermarket…. for Horde Prime.  Anybody less than that (hiya, Netossa) just isn’t worth it anymore.

*Mattel just released new photos of FANG MAN in package (see image above), including his biography on the cardback:

REAL NAME: SCUTES IGNIS “Evolved from the ancient Dragosaur species, Fang Man spent his youth in the Valley of Dragons.  Skeletor recruited Fang Man after discovering his ability to control the fire-breathing dragons to do his bidding.  Fang Man used the Dragosaurs of the past to assist the Evil Lord of Destruction in his evil plans when Skeletor used the Wheel of Infinite to go back in time and stop Castle Grayskull from being built.  Eventually, defeated by He-Man, Skeletor abandoned Fang Man in the past where he resides with his ancestors on Dragosaur isle, waiting for the return og his master.  Fang Man has piercing teeth and uses his mind-control ability to manipulate fire-breathing species.

So, he’s a failure, and Skeletor ditched him with the dinosaurs.  Sad.

*The people who made Dead Island think that the average gamer wants to own a gruesome, severed, bikini-clad female torso in their homes.  Mmm-mmm!  That one’s going RIGHT up on the mantelpiece! HERE

*NECA just tweeted pictures of their new 3 3/4″ Gears of War line.  Well, as long as it doesn’t tank like Green Lantern, can we please have a 3 3/4″ Alien vs. Predator line next?  G.I. Joe needs to have his skull harvested.

*NECA has also shown off factory painted samples of the next Predator series, which includes Dutch “GET TO DA CHOPPA” Schaefer HERE

*Whaddaya know, actual people are totally okay with the Django Unchained toys.  Thanks to Topless Robot for writing about this!  HERE

*Wooden Lego people now exist, and we all need them.  HERE

Again, sorry for the brevity, but I’m in Yosemite, hunting that wascally wabbit.  See you on the flip side!