This episode marks a change of pace, but the bland tale of a generic war in a generic fantasy setting with generic romance and the purpose of delivering generic macroeconomy lessons could be so much better than this.

If there’s one thing that saddens me to no end is to see a good premise for a show go to waste. This is what made me utterly despise Sword Art Online during the last season: it took an excellent setup laid down in the first two episodes and tirelessly worked to destroy every bit of its potentiality as a story during the next twenty-three. Now, Maoyuu Maou Yuusha is not even close to the writing trainwreck that SAO was, but it still is sadly underdeveloping its potential  –  and I have to say, from what I read, this is probably due to the source material being rather shallow, despite its ambitious premise. In other words, this is a story about macroeconomics written by someone who doesn’t understand enough of economics to make interesting or profound statements about it.

And it’s a pity, because the setup is all there. Today we got a glimpse at the human/demon war, which takes more and more the looks of a medieval Crusade, or maybe just the war between humans and orcs in Warcraft 2, and the Hero got the chance to show some sort of critical sense and personality when he saved a demon maiden from what likely would have been sexual violence. This and other moments throughout the episode have the purpose to establish a feeling that this war is not at all a war between good and evil, just another dirty, ugly war where no one is right and everyone loses. We get it, but the concept is perhaps a little spoon fed to us. 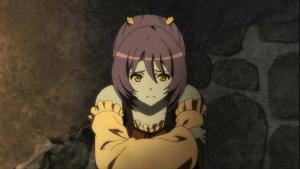 A rather dickish and stupid commander manages to lose an entire fleet while assaulting one of the demon islands (made me think of the Spanish Invincible Fleet, which got owned a bit too quickly, proving once more that you have to be very careful not to tempt fate when naming ships), and this leads to tension – which combined to the effects of some of Demon King’s agricultural policies, eventually disrupts the alliance between the Southern and the Northern kingdoms. The new king of the Southern nations though wants to continue the war, and thus Knight is conscripted for a new mission. 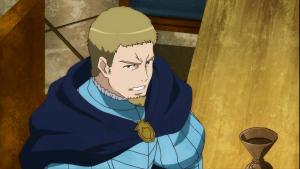 THE KING OF THE SOUTH!

Feeling guilty, maybe also for the unforeseen consequences of her actions, Demon King confesses her true identity to her before she leaves. And in one of the least believable scenes of this anime so far, the Knight, out of loyalty to the Hero and a promise made to him, happily shakes hands and exchanges a promise of friendship with the king of the people she’s going to slay (or who’s going to slay her, if things go bad).

After that, there’s much pillow hugging, there’s much dancing, and conveniently teleporting around. And remember: it’s just a jump to the left, and then a step to the right, with your hands on your hips, you bring your knees in tight, but it’s the pelvic thrust that really drives you insane… 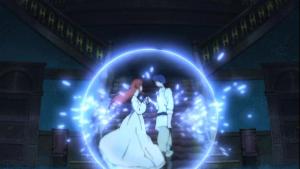 LET’S DO THE SPACE WARP AGAIN!

Sorry. Had to make that joke.

By the way, despite the fact that I’m making fun of it, this was a rather cute moment between Hero and Demon King.

And ultimately, here’s the real problem with Maoyuu Maou Yuusha. It’s just moments: it’s a collection of moments. Heart-warming, comedic, serious, educational, tiny fragments of story that have been glued together in a single show which touches on all those characters and never chooses one for itself, going rather for the dubious path of being mediocre at everything. The single scene may be actually quite good at doing what it does – this actually happens more often with the romantic scenes than the economy-focused ones. But they still don’t feel part of a whole; there’s no sense of an overarching plot, or even of a process of character development, weaving those moments into a single thread. And being almost halfway through this one-cour series, I strongly doubt this is going to change.