There’s a Storm on the Horizon

It looks like Halle Berry is 90% sure that she will be appearing in the new Brian Singer X-Men epic, but it’s still in negotiation so she’s not allowed to discuss it.  Agents heh clearly trying to make sure she gets her bowl of green M&M’s on set daily, well good for her I happen to love Green M&M’s . The green ones make me strong! (No word on Cyclops yet)

Latex begone! Still in the key of X 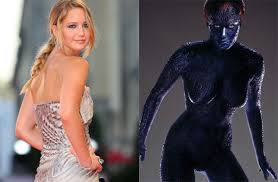 Jennifer Lawrence must be wonderfully relieved as X-men’s Days of future past Director Brian Singer has decided to do away with all that body paint and those discretionally placed latex scales and offer her a body suit instead. I imagine it will be fun to film again rather than sit in a make up chair for most of the day. In related news make-up artist on the Set of  the New X-men have grown mysteriously depressed.

Remember that leak a couple of weeks back, concerning the potential plot of the 3rd Avenger Movie. Well they were wrong. The main stickling point being that Mark Ruffalo has a 6 movie deal with Marvel  and Banner doesn’t appear in the Planet Hulk storyline at all.  Guess it’s back to the speculation….

It’s not easy being Green