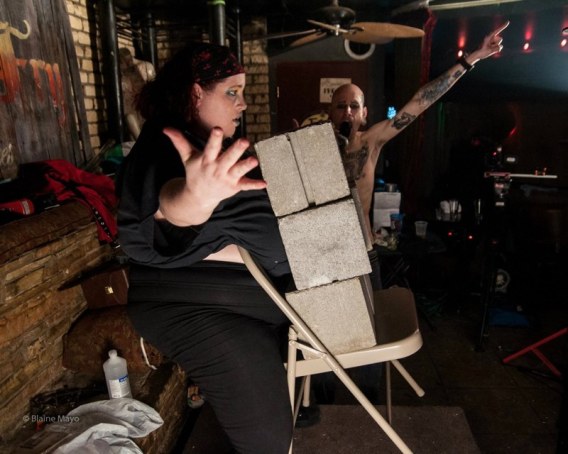 The Amazing Boobzilla is a sideshow performer based in Oklahoma City where she performs with her troupe The Oh No! Variety Show. I was able to catch up with her just before leaving on tour with Hellzapoppin Sideshow Revue.

Ford Thundercougarfalconbird: Hi Boobzilla, thank you for taking time out of your schedule to talk with me. Why do they call you “The Amazing Boobzilla”? What is so amazing and why are you Boobzilla?

Boobzilla: Well, it isn’t for my fancy facial hair, I’ll tell you that. She then places a finger to her upper lip. A mustache tattoo is on her finger, thereby giving her the appearance of a mustache. BZ: I am called Boobzilla, the name started back in the early 2000s. I started out at the Rocky Horror Picture Show in Denver. I was called Boobzilla by my high school friends and boyfriend as a joke … from having giant boobs. I have a medical condition, called gigantomastia. It means that my boobs will never stop growing until I reach menopause. It had really started to become more and more pronounced as my young adult body continued to develop. It was already one thing for me to carry combat boots, and purses and what not (with my boobs). Until I became a member of the Rocky Horror Show cast and then it became this random piece of amusement. So I got the name “The Amazing Boobzilla” by my cast members before I started doing sideshow. I was denting small cans like Busty Heart. And doing weird things like puppetry. Like Puppetry of the Penis, but with breasticles instead. That was how it got started. They developed their own personalities and they became their own, like, double curtained theatre. *laughs*.

FT: Oo-kay. I don’t think I’ve seen this part of the act.

BZ: *laughs* It was early Boobzilla! The name just stuck ever since. That’s actually how I got into sideshow. My “Rocky” cast put me in touch with a (sideshow) performer that was coming to visit and doing pre=show entertainment before the movie. That was when everything just started to take off.

FT: So, just to clarify, you can lift large weights with your breasts?

FT: You’ve also been know to break concrete blocks with your breasts.

FT: How much weight are you lifting now? With your breasts?

FT: Lifting over 200lbs with just your breasts? 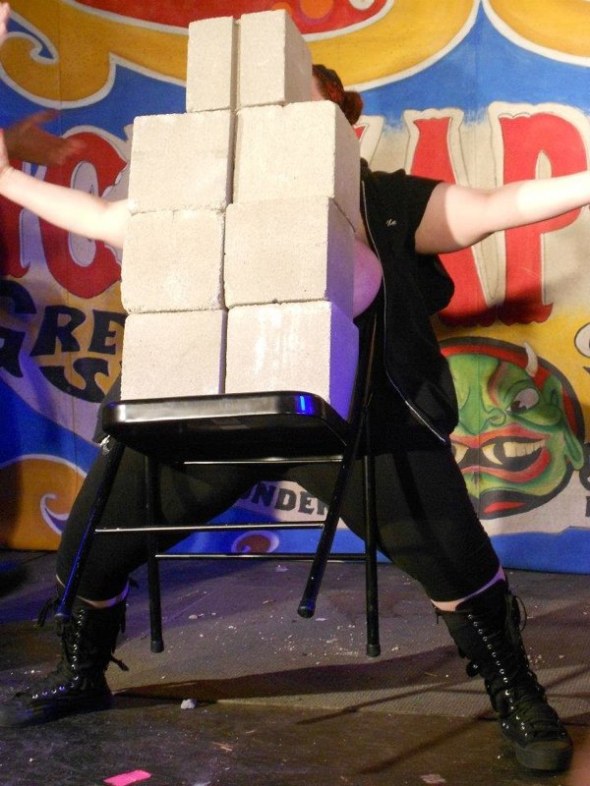 FT: And how many other women in the world can do this act.

FT: What other acts do you do with your breasts? You said you do breastket ball?

BZ: Boobsket Ball. It just kind of rolls off the tongue. I’ve also done a complete coffee service with a Ramada Inn coffee maker. *laughing*  It needs to come back to the act. It’s two cups of coffee, cream, sugar, spoons.. coffee machine? Why not? We’ve done some magic tricks out of my bra before. We’ve used my bra as a quick-change act for other performers. That was hilarious. But Boobsket Ball is my favorite. I use myself as the backboard and I put by boobs in a long, rectangular laundry hamper and I have people just shoot the ball into the basket. It works really well for the local OKC Thunder people.

FT: So has Kevin Durant had a chance to um play?

BZ: He won’t return my calls!

FT: We need to work on getting Kevin to play.

BZ: Stop being lame Kevin Durant, you can make the shot!

FT: You said you got your name from your large breasts and the fact that they will never stop growing.

FT: Now, I’m going to ask a question that a gentleman should never ask a lady… of course I’m no gentleman.

BZ: Are you going to ask how old my boobs are?

FT: We’re not going ask the age or the weight, but the people want to know. How big are they?

BZ: They’re bigger than your head. Right now, I’m sitting at a 44Q. That was when I was last sized, and I’m getting larger than that. Thanks to the gigantomastia, it means I will not stop growing breast tissue until menopause.

FT: Wow. 44Q? I guess you don’t buy your bras at Victoria’s Secret?

BZ: No, no Walmart plastic bags.

BZ: That may have to be down the line for my new swimsuit line. No at this point, I don’t have bras in my size. I’m looking at getting bras made in my size, but, truth be told, to get a bra made in my size, it’s going to cost, at a minimum, $350 just for one bra. That’s more than most people spend in 2 years just in bras, actually!

FT: How long have you been carnying-ing-ing?

BZ: *Laughs* Carnying-ing? Well, I started back in 2004. That makes me an old fogey now. Okay, not really, but… So I’ve been Carnying-ing-ing for about 9 years now, and I started out by doing my signature act, which a couple of people thought was a complete joke and waste of time. Until they realized I could pick up midgets and play boob-sket ball (patented trademark pending).

FT: How do you pick up midgets?

BZ: Well, it starts with the pencil test gone horribly wrong. I put my boobs over the back of a chair, preferably a metal folding chair because the cold really helps sink things in. What I do is I start by deadlifting a metal folding chair, then we place a midget or small person or little person, whatever name they prefer. We place them in a sitting position and we continue the deadlift on forward.

FT: Now this website is for nerds and geeks. Some sideshow performers in the past were known as geeks as well as freaks. Do either of those titles apply to you?

BZ: Geek no, I do not eat live animals…specifically I do not bite the heads off of chickens in a pit. Freak, absolutely! I’m what is known as a “born freak” with the Gigantomastia.

FT: What other acts do you do? I have seen your act before and I know you are multi-talented. So other than your breasts, what more is there to Boobzilla?

BZ: What more is there to Boobzilla? Everything under the sun! And the sun, too. I do a lot of the standard 10-in-1 sideshow acts that you’d see on the midway. I try to bring them up to date. I give basically an homage to these tried, tested and true acts and try to give them a modern flair. Keep them fun and interesting, and still educational. The Blockhead, thanks to Melvin Burkhart, where I drive a nail into the center of my face. No, no, not the eyes! And doing the Steel Hand, where I am able to put my hand and other appendages into animal traps and still survive. Of course, I do the Bed of Nails, but I’ve changed it up to do what I call the Bed of Nails Iron Maiden, where I go between two full sets of bed of nails. I’ve been able to support over 700 lbs on top of myself while in between two beds of nails. Walking on broken glass. Breathing fire, eating fire. I also do fire manipulation. I also do glass eating, but not too much anymore.

Probably some of my favorite acts would also be the straight jacket escape. Thank you Houdini for making it awesome! I like to call it the Sanitarium Striptease where I horribly strip out of a straight jacket to keep it fun and different. It gives people the opportunity to laugh at my inability to dance without knowing I really can’t dance. They just think I’m joking. I also participate in sword swallowing. That’s an act that has been around for over 4000 years. It started in India. It’s been used.. even still, by modern tribes as a right of passage to manhood, and testaments of your adulthood as well. It’s more than just the astral projection of your soul, more than just mind over matter. Sword swallowing has been around for that long and has been celebrated, not only as just this transcendental act. It’s almost unifying in fact that we get to carry on a tradition that has been around for so long as humans have evolved. … and it’s fancy.

FT: I see you do have one of your swords with you.

BZ: Absolutely.You don’t want to lick it though, it doesn’t taste too good.

FT: I see that this actually a sword. There’s not a fake handle, no springs or anything. It’s really a cold piece of steel.

FT: I’d rather not put that down my throat.

BZ: This is why sword swallowers prefer to refer to this particular routine as an “act” not a “stunt”. Stunt implies that someone can take over your position at any time to remove you from the danger. It also implies that not everything about the act is 100% real, which puts it into the area of magic or illusion. None of our blades retract, break or tear. They do bend, some swords are just going to bend. The SSAI requires at least a minimum of 15” in length in order to become a member of our organization. With that 15” minimum, that means that it is actually going down your esophagus, past your epiglottis, past your heart and lungs, and actually into your stomach. It may not hit the pit of your stomach, but you are swallowing TO your stomach.

FT: So where can we currently see The Amazing Boobzilla? I understand you are going on tour?

BZ: Yes, I am leaving on Saturday (March 9th) to go to Jacksonville, FL, where I will be performing at The Eclipse. You can find out the tour info on my Facebook group. Or you can check us out at TheAmazingBoobzilla.com where I will be mirroring all my tour dates. I’m going to be touring with Hellzapoppin Sideshow Revue. You can also find tour dates on their website Hellzapoppin.com. Outside of that I normally have a show at The Drunken Fry in Oklahoma City on the third Sunday of every month. Unfortunately, because I’m leaving on tour, I won’t be able to have my St Patrick’s Day show at the Drunken Fry. Hopefully I’ll be back soon.. or not depending on how the tour goes. The first leg of the tour ends on Cinco de Mayo.

FT: I understand you also accept bookings for public performances and private parties, and you’ll go just about anywhere as long as the price is right.

FT: I understand you also have a problem with Canada.

BZ: Well, I don’t have a problem with going to Canada.

FT: Well, I guess I should say Canada has had a problem with female sword swallowers recently.

BZ: Yes. There always seems to be a problem with Canada letting them leave the country. Two separate instances with two different ladies over the past year. But I promise I won’t poke a Mountie or smuggle US beer into Canada.

If you want to catch Boobzilla on tour or just keep up with her, you can find information at TheAmazingBoobzilla.com, Hellzapoppin.com and OhNoVarietyShow.com All photos used with permission of The Amazing Boobzilla and The Oh No! Variety Show.

One response to “Carney Carnage: An Interview with The Amazing Boobzilla – Adult Content”