The tough thing with toy reviews is timing – ideally, you want to magically have and review the toy before it actually comes out, so people can look at it before deciding if they want to buy something. Barring that, you try to grab the toy and review it as soon as possible for the same reason. Or, if you’re me, you can review a toy fourteen years after it first came out! In honor of some of those older toys that just haven’t been reviewed, I feel like inaugurating a semi-regular feature here: RETRO TOY REVIEWS! Sure, you won’t find them on the shelves, but eBay is a cornucopia.

Let’s look at our first one today, Medusa from Spawn Series 13: Curse of the Spawn. She came out in 1999.

I like Medusa. No, no, not like THAT! Well, wait, um, y’know, I am desperate enough for a date… let’s not go there. Anyway, you know the story of Medusa in Greek Mythology – blah blah, offended Athena, turned into monster, stone gaze, beheaded by Perseus. Most of us are probably equally familiar with Clash of the Titans, which popularized covering her in scales and giving her a bow. This is from Spawn, and it actually took a lot of searching before I found her comics backstory. She’s surprisingly obscure, having only appeared in one of the small stories in Curse of the Spawn, an anthology spinoff about other Hellspawns in history. In the comic, Raenius (the ancient Greek Spawn) was unjustly murdered by his half-brother Zeus, and Medusa, his lover, was unjustly transformed into a monster. So Raenius-Spawn and Medusa teamed up (and kept their relationship going) to fight back against the Greek gods, soon killing them all – Zeus included – and ruling from Olympus as the new gods. So… God of War before God of War? Yep.

‘Course, this doesn’t seem to jive with Medusa’s description on the packaging:

“Feared by mortals and immortals. The Gorgon with the hair of serpents can turn anyone that gazes into her eyes into living stone. She and her army of evil minions seek power and punishment for those that do not bend to her will.”

Interesting. She’s relatively sympathetic in the book, and yet the toy tries to make her look like the villain. I guess MONSTERS ARE ALWAYS BAD, or something? Who knows. But the figure really doesn’t resemble Medusa in the comics, so it’s a moot point. Now, let’s talk about her!

Old toy, so I don’t really have a picture of the package in my possession. it’s a plastic-on-cardboard blister pack with lots of info about Medusa the toy, a paragraph on the character, and promo pictures of other McFarlane toys out at the time. Overall, I’d say it’s pretty good for what it needs to be, though the pictures on the back feel cluttered. For the time it came out, though, it was pretty great.

Wow. Well, I said this figure doesn’t really resemble the comic Medusa, and as it turns out, that’s a good thing! It’s really ornate, and probably the best Medusa toy you’ll find outside of expensive Clash of the Titans prop replicas. It actually looks a lot like a D&D Medusa as of 3rd Edition, or so, with the scaly texture and facial shape. I like that, I really do. She’s also got a little bit of an aquatic theme to her, with webbed fingers and some fin-like spikes on her arms. Medusa also has a pair of tiny, ragged wings on her back, which help her seem a little demonic. Now, the fun thing about this? Aside from the lack of a nose, she looks nothing like Spawn comic-Medusa. The one in the comic had smooth skin, almost froggish features, far fewer snakes, and a ragged fringe leading from her arms to her shoulders, somewhere between wings and fins(but without enough detail to tell which). She didn’t have the toy’s scales, claws, spines, wings, most of the head snakes, facial shape, tail, or even feet – Comic-Medusa had hooves, and this one does not. I mean, come on – the toy has a tail, and Medusa in the comic didn’t!  So let’s let the comic rest now, and look at the figure for what she is.

Medusa is really something else – she manages to be both horrifying and sexy, which isn’t something you’d think could happen. Her initial sculpting was done by one of the Four Horsemen, and this shows, as the figure is quality. The level of detail in her sculpt seems out of place for the late ’90s, especially in those scales. If you can avoid being embarrassed by the Scaleboobs, you’ll note the different texturing over her body, which kind of matches up how you’d think she’d look (if not really how actual snakes are). All of her head-snakes look great, and have little individual details setting a few of them apart, though it’s somewhat hard to tell in the massive tangle. Kind of funny how a few are clearly cobras, whereas the rest of her body is meant to evoke some kind of sea serpent. There are all sorts of other little details, like her “high heels.” She’s got a dewclaw sprouting from each heel, suspending her feet in a way that can’t possibly be comfortable to walk on. I do need to make a little complaint, though – her tail dips just a tiny bit too low to allow Medusa to lean back at all, which makes it hard for her to stand. She’s top-heavy and front-heavy (heh heh), and the tail isn’t a goo dstabilizer. If it were just the tiniest fraction of an inch higher at its lowest point, this wouldn’t be a problem, but as it is, you have to pose her pretty carefully, with one foot much further out than the other to keep her stable.

By any standards, 1990s or 2010s, Medusa’s paint is excellent. She’s got a mixture of greens, blacks, and grays, blending into a nice little pattern across her face and body. It goes well with her sculpt, and isn’t thick enough to hide any details. The only slop I could find was in her snake hair, in some of those snake mouths – but maybe they’re full of blood from a recent meal? Yeah, we’ll go with that. Her accessories are also really well-painted, too.

And I’ve gotta point out, the little red tips on her tongue are cool. Somebody’s been licking blood! 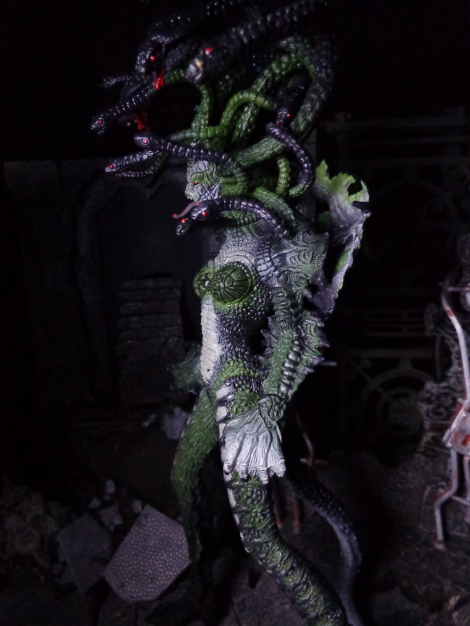 By 1999 standards, Medusa’s articulation is pretty good. By today’s standards, not so much. It’s got a few issues besides those, though, which I will bring up.

Not counting the snake hair, Medusa moves at the Big 5 (head, shoulders, hips), plus her wrists. All the joints are cut joints, and due to her scaly nature, moving her doesn’t make any of them seem “wrong.” Overall, it’s fine for what she needs to do, with only a few exceptions.

-Medusa has very little head movement because her snakes take up so much space. If you want to turn her head, do so carefully and remember to manipuloate those snakes around her tiny wings. Why does she even HAVE wings? All that they do is get in the way!

-Medusa’s lack of elbow articulation shouldn’t be a problem, but it actually does feel like an issue when you try to pose her. I’m just so spoiled nowadays. Also, remember to watch her arms with those wings again.

-Medusa really needs knee articulation to help her stand better. If she had that, then her balancing issues would have been moot. Ah, c’est la vie.

Aside from those problems, she’s also got her snake hair – the larger snakes are bendy, whereas the smaller ones are not (but they are flexible). The bendy ones feel sturdy and flexible, and are really very good, easily some of the better bendy toys I’ve dealt with. They add a lot to the play value, even if you have to unentangle them from the other snakes. But it’s her balancing issues and the potential head breakage that reduced Medusa’s score so much, sadly. 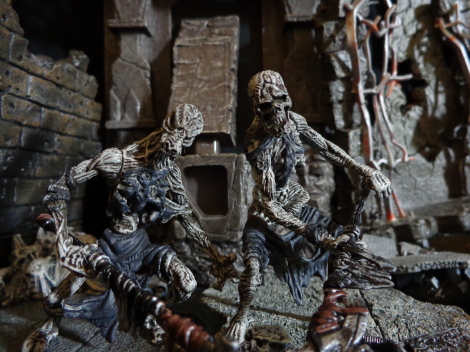 Firstly, she has her “Snake Staff,” which is actually just a snake. It’s not a staff. It’s bendy, and like her snakes it feels both sturdy and flexible. I’ve bent it a lot more than most bendy toys (O’m paranoid about bendies) just for this review. Based on one of the photos on the back of the box, I usually have her hold the snake in both hands, letting it sag realistically between her arms. You can also wrap it around her leg and up her torso… which might be a little suggestive. But hey, it’s Medusa, and what’s a Medusa if she can’t be nightmarishly attractive once in a while?

But yeah, it’s an awesome snake.

She’s also got her two minions, each of which have weapons of their own. In the comic, they’re the Children of the Dragon/Hydra’s Teeth, which is as good an explanation as any. I don’t remember them being knee-high in the ocmic, but you never actually saw them in frame with anybody normal, so it’s hard to tell. One minion clearly came from a human skeleton, whereas the other one has what looks like a snake’s skull for a head. These little emaciated, mummified guys are pretty cool, and move at the head, waist, and one arm each. Their halberds fit very loosely into their hands, and it’s a little tricky to pose them right, but those negatives are quickly drowned out by how good the two little guys look. If you’re buying Medusa as a D&D monster or generic Gorgon, then you can just file them away as pigmy zombies for later. Between these two guys and the snake, it really seems that Medusa has a lot of friends. Makes me wonder a little about the Raenius figure…

Watch the head – if you’re not careful, you can put stress on Medusa’s neck joint when you try to turn it. Also, mine came with one arm stuck, but I was able to free the joint with a little bit of work. Finally, as always, watch the bendies. bend them too harshly, and the metal wire will snap. 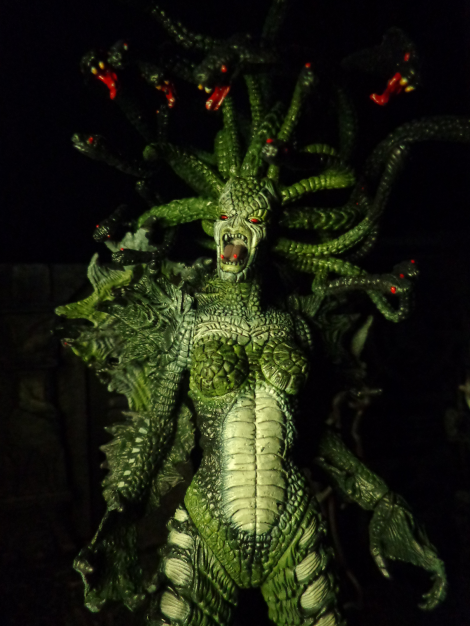 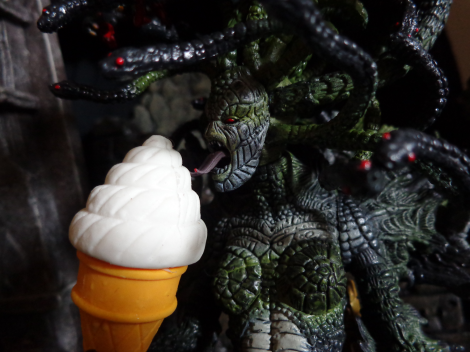 Aside from the issues with Medusa’s articulation and quality control, this really is a great figure. She’s creepy, nightmarish, and… oddly alluring. Or maybe not. But anyway, it’s one of the best Medusa figures I’ve seen, and I’m glad to have one sitting around on my toy shelf. Just make sure that she’s standing in a stable position first, though.

eBay is your best bet. And don’t worry, there are plenty of Medusa there, and she’s cheap! So I’m glad that I found this thing, even though she does show her age in a few ways. But Medusa stacks up nicely with other horror-themed figures, and should look good on your shelf, too. If you’re into that sort of thing.

4 responses to “Life In Plastic: RETRO TOY REVIEW: Medusa (Curse of the Spawn)”