Hey guys, did you know that Friday the 29th is Kinnikuman Day in Japan?  So, what better than to honor it with today’s Life in Plastic?  I was originally gonna call this an Obscure Toy Line You Should Care About, but… it’s MUSCLE.  It’s not really that obscure.  About half of everybody my age remembers them.

The last few years have seen kind of a mini-figure renaissance, from great indy projects like OMFG and Universe of Violence, to mass-marketed retailer lines like SLUG Zombies.  These are different from Lego figures, Kre-O figures, Mega-Blocks figures, MiniMates, and any other pseudo-Lego toys, and they really all owe their existence to MUSCLE!  MUSCLE was in stores from 1985 to 1988, which puts them squarely in Nostalgialand!

MUSCLE is actually based on a Japanese series, Kinnikuman (translated: Muscleman).  Kinnikuman ran from 1979-1987, with a “Next Generation” series in the 2000s, a revived sequel manga ongoing right now (since 2011), and anime shows in the ’80s, ’90s, and ’00s.  It was one of the first comedy/violent action shows out there, and actually inspired a lot of the things that we usually associate with Dragon Ball Z, namely:

*Power levels (only they don’t matter in Kinnikuman.  Characters routinely beat bad guys more powerful than their own level, and nobody cares much about levels in the series.)

*Easy resurrection (people die and come back from the dead all the time.  In one fight, Kinnikuman died, but returned before the 20-count out in the ring was finished.)

*Long fights (though no time is spent powering up, some of the fights can last pretty long.)

*A goofy moron of a hero (and HOW! He’s like Homer Simpson.)

Basically, Kinnikuman is about a bunch of superheroes and supervillains who fight each other with nno-faked pro wrestling.  The series started as a goofy parody of Ultraman (hence the crest on Kinnikuman’s mask), with Kinnikuman as a failure-filled loser hero, but soon morphed into the wrestling saga it’s known for.  Sure, the art is kind of poor, continuity is loose (really loose.  Stuff gets retconned or forgotten about all the time, to the point where a character can have a beard in one panel, and then lose it mid-scene), the fights are gimmicky, and the humor is often crude, but… it’s a good series.  It really is.  The whole picture turns out really well.  A good summary of the series is, “If Homer Simpson Were A Super Hero.”  It has one of the best progressions from loser to hero that I can remember, especially with the way it starts to get serious – with the first real tournament, you expect Kinnikuman to lose, but for it to be funny.  Then as he starts winning, you start to genuinely root for him, and you can see some of the (surprisingly subtle) development he had been getting throughout the series.  And then by the time he’s in the final match, you’re still sure he’s going to lose, but rooting for him nevertheless.  And winning that match set Kinnikuman on the path to actually becoming a hero, which the series developed pretty well.  It’s really, really well-done.  But I went off-topic…

The most famous Kinnikuman toys were kinkeshi – hundreds of little eraser-rubber figures based on nearly every costume of every character in the series, even the “cameo appearances” – Kinnikuman’s characters were fan-designed, so sometimes extra submissions would get one-panel appearances.  Mattel licensed the Kinkeshi, and brought over about half of them.  Kinkeshi figures unproduced when Mattel got the license were never made into MUSCLEs, and certain already-existing ones got the axe, too – the Nazi guy (more on him in a sec), two-part figures that could be choking hazards, the girls, anything possibly offensive, and other figures whose molds were probably attached to the same sculpting tree.  There is no concrete evidence for these specific reasons, but logic kind of helps fill in the gaps. 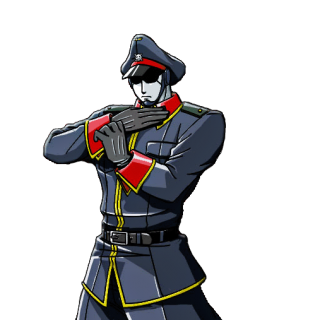 Oh, yeah.  Nazi guy.  See, characters in Kinnikuman were, um… were stereotypes.  The American hero was a cowboy with a gun.  The Chinese hero had slanty-eyes and was named “Ramen Man.”  The Japanese hero was a sumo wrestler.  And the German hero dressed in Nazi regalia, complete with swastikas.  He never actually mentioned being a Nazi, nor did he ever act like one, but… Yeah.  Japan’s so naive sometimes!  And the sad thing is, that character actually got a lot of good development and screen time in the series, and it’s easy to completely forget his costume.  This is probably why Kinnikuman didn’t gain much traction in the United States.  But ANYWAY… back to MUSCLE!

MUSCLE figures are made of a much harder and more durable plastic than Kinkeshi rubber, which is good.  Eraser rubber isn’t very durable, whereas MUSCLEs just might outlast a nuclear war.  They first came out only in flesh, but later were released in a bunch of colors.  There are 233 “regular” MUSCLEs listed on the poster, with the total bumped up to 236 thanks to one smaller version of another sculpt (probably a copy made in one of mattel’s other factories), a brand-new MUSCLE-only sculpt, and one mysterious Kinkeshi sculpt that shows up pretty often, a four-armed gladiator based on the “Satan Cross” character from Kinnikuman. 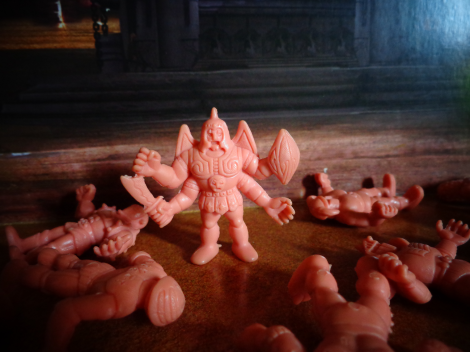 There are also a lot of one-of-a-kind or similar “Super Rare” figures – Kinkeshi sculpts that got produced as MUSCLEs, or at least in MUSCLE plastic, but are basically one of a kind, with absolutely no explanation to where they came from.  A mistake?  product recall?  Sales samples?  Check the links at the bottom of this article to find lots of investigation on this, but with few conclusions.

So, what’s so special about MUSCLE?  The first and biggest thing is kind of an anomaly because of its origin – Mattel didn’t port over any of Kinnikuman’s story, except for a vague “They’re intergalactic wrestlers, Muscleman is a good guy, and Terri-Bull is a bad guy” story.  Speaking of that, “Terri-Bull,” named “Buffaloman” in the original, was a villain who turned good pretty quickly, and became one of Kinnikuman’s best allies.  So, over two hundred little rubber guys were ported over here without any backstory or a tie-in cartoon, or anything.  This left everything up to our childhood imaginations.  That, coupled with the fact that MUSCLEs were pretty cheap, meant that we were likely to get a bunch of ’em.

The thing is, whether you’re familiar with the series or not, MUSCLEs are awesome!  Sure, their tiny, unpainted nature isn’t exactly cutting edge, but look at them!  Hundreds of random dudes, monsters, robots, aliens, super heroes, villains, and who-knows-what-else!  One of them is even a spinning top!  made of bricks!  The most famous (and most valuable on the aftermarket, next to the super-rares), is “The Claw,” a gigantic hand with a face on its middle-finger.  In Kinnikuman, it was merely one form that a shape-shifting bad guy took, but in MUSCLE, it’s the most awesome thing imaginable!  Getting one on my fourth birthday was one of the things that turned me into the raving toy maniac I am today!

MUSCLEs are still pretty cheap, with only the Claw, the super-rares, Satan Cross, and some rare sculpt-color combos going for any reasonable amounts of money.  This means that you can collect handfuls of the guys without impacting your bank account any, which is quite a good thing, toy-wise!  So, yes.  MUSCLEs are awesome.  If tied to Kinnikuman, they’re a great way to merchandise the show.  If completely on their own, they’re an imagination-inspiring army.  And I absolutely recommend that you check these little guys out if you get even half the chance!

So, where to go to look these little fellows up?  You can start with Little Rubber Guys, the best forum for any kind of minifig stuff in the world!  Then you can go check out University of MUSCLE for all the MUSCLE-related info you’ll ever need, and Soupie’s MUSCLE Guide for a visual archive of all of the regular figures and colors.  As for Kinnikuman and Kinkeshi… sadly, the main visual archive of kinkeshi has been offline for a while.  You’ll have to ask around, I’m sorry.  But enough talk – go grab yourself some of the Millions of Unusual Small Creatures Lurking Everywhere!

Three Kinkeshi: Who’s On First?  What’s On Second?  I Don’t Know’s On Third?

10 responses to “Life In Plastic: My Favorite Toys: MUSCLE”