So it’s over. I can’t say I hated this series, but I’m still glad that it finished. While watching it didn’t give me the weekly feelings of murderous fury that the late Sword Art Online gave me, it still didn’t exactly feel good enough to make me eager to do it. It simply… happened.

It is a testament to this series’ dullness that it managed to pull off the POWER OF LOVE!™ deus-ex-machina at the end and still not enrage me especially. It simply felt detached like everything else; and like everything else, functional to the purpose of the series. This anime is like one of those educational cartoons: the characters are non-existent, everything that happens isn’t even remotely thrilling, because the actual purpose is just to transmit a message. The problems with this approach are two. One, it doesn’t work, because no one will care for a message shipped in such a crappy envelope. And two, in MMY’s case, it’s not even clear what the hell this message is supposed to be. Liberalism is good, feudalism is bad? Demons are not necessarily ugly monsters we can’t have an agreement with? Kids, remember to rotate your crops? Yay boobs?

And so this final episode absent-mindedly wraps-up some plot threads, leaves other hanging, and generally gives the impression of not really giving a fuck about it. Demon King’s body possession by the bloodthirsty souls of the previous Kings is quickly dispatched thanks to the aforementioned POWER OF LOVE!™; other obstacles to everyone that matters having a happy enough ending, like Head Maid having LOST A FUCKING ARM, are similarly dealt with without much thought. 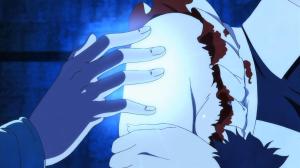 “By the power of plot convenience, I heal thee!”

The war will perhaps end, even though the demons seem to be really fired up about murdering the humans (it doesn’t help that in an attempt to gain their respect Hero in his Black Knight disguise casually blows up a mountain. Y’know, just for the lulz). The guy with the Eyepatch of Evil is killed off by a nameless Soldier, who manages to pull off an improbable stunt of saving himself from a fall into a well by sticking his sword into a wall. Mage keeps doing her thing, that is being mysterious and having a split personality and eerily resembling Yuki Nagato from The Melancholy of Haruhi Suzumiya. Oh, she also casually teaches people how to produce a smallpox vaccine.

And that’s it, really. No big ending. The war is still going to be fought, if perhaps with a shift of alliances. The “other side of the hill” has not been reached; people still murders each other, only now they do so over different reasons than they used to, and now Demon King has introduced gunpowder, which means they will be doing so in a more modern and efficient way. Trade with the demons might begin. And the conclusion is that Demon King is proud of how the Young Maid has managed to trigger off all this with her speech.

“These puny humans amuse me.”

Paradoxically, everyone seems to be really satisfied and happy with History showing itself to be basically cyclical; which could be ok if their objective was just social and/or technological advance, but considering how Demon King seemed to aim at peace at the beginning, it seems not much to me. Also, this accelerated retelling of the 16th century with demons and magic stuck so close to the actual flow of real history – in spirit if not in actual events – that we can pretty much say what’s going to come next, and it’s NOT going to be peace and happiness and rainbows. Which are maybe an utopia, but still, they’re supposed to be the utopia our heroes are struggling for.

One last thought about something I just realized: if anything, this series diminishes the role of humans and their dignity. Everything that happened in MMY sort of happened in real life as well; but while the same social, scientific and technological conquests were obtained by the combined work of many geniuses, researchers and brave and hardworking people, here they all are dropped effortlessly from the high ground by a big boobed demon girl with ambitions of social engineering. It’s the sort of nightmarish scenario an Illuminati conspiracy believer would love.

Final judgement: Maoyuu Maou Yuusha is a rather flawed series. Its interesting premise – the idea of bringing macroeconomics into a fantasy war scenario – is quickly ruined by a chronic indecisiveness in stylistic choices and a lack of research in writing. The result is an anime that is both emotionally dull and plot-wise shallow. Animation and music are average at best, and nothing engaging is to be found here. It’s not fun nor worth making fun of. In honour to such perfect plainness, I can’t give it anything but the most average of all grades: