There was a lot of controversy when NECA unveiled some of their upcoming Predator designs at the New York Toy Fair.  You see, Series 10 is going to be based on Kenner’s old Predator toy line – sure, it adds another set of three figures to the series, and it doesn’t harm the progression of movie characters, but admittedly these guys do look kind of crazy, even when compared to some of the other stuff in the line.  But you know what?  I really think that collectors will come around when they start seeing these guys in-hand!  And the nice thing is, we may not have to wait so long – sure, Series 10 is coming in August, but Kenner’s released a special “Sneak Peek” that’s started turning up exclusively at Toys R Us – the Clan Leader!

Kenner’s original Clan Leader was a “Deluxe” figure, sharing this honor with two Alien Queens and one space marine in gigantic armor.  As a result, he was about a head taller than the average Predator (more if he used his elevator boots), and had a pretty big action feature:  Connected to his armor somehow were two big robo-tendrils (or dreadlocks) that the Clan Leader could whip around when you pressed a lever on the back of his head!  They were awesome, if a little fragile.  He also came with a halberd weapon and a mask, and his boots could extend like mini stilts.  But enough about the old figure, let’s talk about the new one!

I’m really sorry that I forgot to take a packaging pic AGAIN.  I keep doing this! (the Deacon on Poe Ghostal’s Points of Articulation, Predasaurs on MWCToys, etc. etc.).  I just kind of get excited and lose control like a toy-collecting werewolf or something.  Sorry!  But anyway, the package is typical NECA fare – a plastic clamshell, with a photo and a short blurb on the back.  As it’s a “Deluxe” figure, the clamshell is slightly larger to accommodate the Clan Leader’s tendrils.  It’s also a stand-alone release, since this guy is a Toys R Us exclusive.  Thee’s no fancy art, just a photo of the figure’s face, and his blurb is:

“Considered old and wise even among other Yautja elders, the Clan Leader rules over many tribes and leads hunting parties. Despite his age, he still sometimes hunts with his younger brethren, using his mechanical dreadlocks like whips.”

So, yeah… incessant use of “Yautja” (predators have at least two different expanded universe names), slightly nonsensical stuff, and no info that we couldn’t have figured out on our own, but it’s all good!  So, those tentacles are dreadlocks, then.  Apparently. 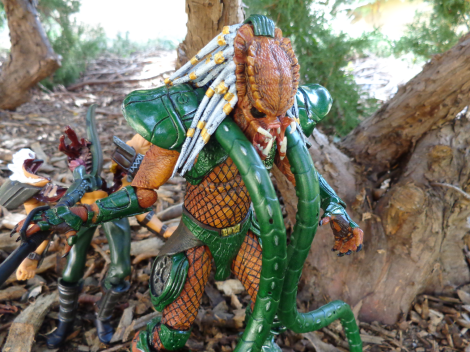 One of the reasons why NECA has been able to make so many Predators is that they know how to re-use parts – nearly all of the “lost clan” shared the same basic body, but very few people complained!  This guy isn’t much different.  He’s got the basic City Hunter/Lost Clan body, the Shaman head (slightly altered – he has long dreadlocks, with some armor instead of the “ponytail,” and arms from the Tracker Super Predator.  His shins and shoulder armor are all new, though.  His feet are generic Predator feet, but retooled slightly to allow for his elevator boots, which are all new.

The dreadlocks are interesting, as NECA really went for a “tendril” look – they even have little suction cup markings if you look closely enough!  But they fit the character’s general look, and actually match the type of detailing on his armor.  Just as with the original, they are tipped with thick metal spikes.

The pieces look great together, although you can tell some of the reuse (especially on his right leg).  The new pieces, though, are excellent, and blend seamlessly with the old stuff!  The Clan Leader’s armor has kind of a samurai/Lord of the Rings aesthetic, which helps the Clan Leader stand out on the shelf.  For some reason, he lacks a plasma caster, which is odd since the original figure was one of the few Kenner Predators to include one.  But overall, great work! 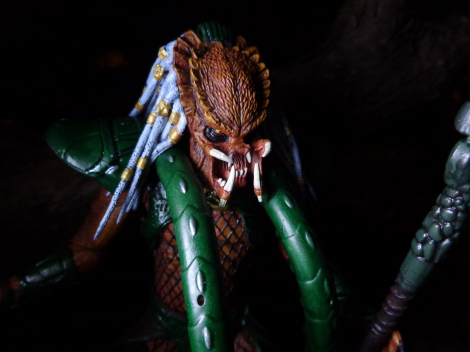 It seems like NECA improves its paint quality with every series, and this one is no different!  For one thing, the painted body netting is FLAWLESS, and I’ve never seen those lines look that clean on one of these figures before!  Of course, mine might be unique, and it could be sloppy on others.  But overall, the paint applications are crisp and clean, without any slop.

The Clan Leader’s skin is reddish, like in his original incarnation, but with some orange and brown mixed in.  It’s unique and stands out among released Predators, but doesn’t look “wrong” (though admittedly, since we have blue, green, and yellow Predators, almost anything goes).  His dreads are all white, as opposed to the Predator 2 Elder’s slightly graying dreadlocks, or even the (not released by NECA) AvP Elder, whose dreadlocks were a blue-gray.  There is a slight blue tint in these, but it’s not terribly noticeable, and the color really gets this guy’s advanced age across, even though he lacks any other signs of it.

His armor is a dark, metallic green, which is kind of odd.  Yes, the original Clan Leader’s armor was green, but it was really, really dark – almost black!  This one errs more on the side of green, even appearing bright.  It’s odd, and different from the original, but contrasts nicely with his skin.  But aside from that, they put effort into making him match up with his predecessor – his eyes are even colored the same as the original’s, with those dark circles surrounding them.  And the paint as a whole is so clean and crisp that I really can’t fault anything… but I have to subtract half a star for the shade of green. 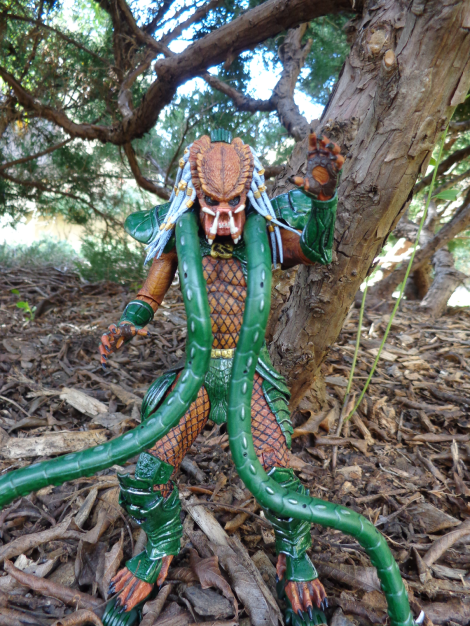 Since he’s made of pre-existing Predator parts, it’s a given that the Clan Leader’s articulation is fantastic.  But there’s more than the norm, though!  His shoulder pads are hinged, so they can swivel up to allow more arm movement, and his elevator boots can also turn in their sockets.  They’re also easily removable, in case you find them ridiculous.

And finally, his two dreadlock weapons are fully bendy, and plug into the armor near his shoulders.  They feel surprisingly sturdy, but aren’t overly stiff – Bendy toys always make me nervous, but these ones seem okay.  In fact, they are fully capable of supporting his weight, especially in the “Default” slightly-curved pose.  That’s great, because it gives the figure way more poseability with less fear of NECA’s usual “Loose Hips” syndrome.  Also, mine had no stuck joints when I got him, in a first for the company!  His hips are a little loose, but not overly so, and thankfully the dreadlocks help support his weight.

The NECA Clan Leader comes with his dreadlocks, elevator boots, and a bladed weapon reminiscent of his halberd.  The weapon is totally unique, and very clearly inspired by, but not a direct update of the original.  For one thing, the axe head is smaller, while the blade is larger and curved instead of straight!  it’s also got a handle on the shaft, which lets you slip it easily over either of the Clan Leader’s open hands.  It’s a snug fit, but not too tight, and I really like the idea – for once, when he’s empty-handed, he doesn’t look like he’s trying to clutch an invisible bottle the way most toys do.

Now, as awesome as these things are, I need to point out the two items he doesn’t have – firstly, he doesn’t have a mask.  This makes sense, since it would require all new tooling, and apparently NECA really wants to try the upcoming Nightstorm Predator as an experiment on removable masks.  Still, the original was so unique that I can’t help but feel I’m missing something without it. And secondly, he lacks a smart disc.  The original figure did not come with one, but this guy has a holster attached to his right leg.  This is odd, since not every figure using the City Hunter body has the holster, but it’s there, and it wants to be filled.  The Warrior’s silver disc might work, but I feel that you would need something in the same shade of green as his armor.

Those two missing pieces aside, the Clan Leader is pretty well decked-out, especially for the normally minimist approach this line takes for its figures.  I can’t help but think that it would seem more “Deluxe” with something else, though.  If not those weapons, then what about a trophy skull?

I’ve gotta say, the complete lack of stuck or overly-loose joints is a real breath of fresh air!  I’d be careful around the bendy dreadlocks if I were you, but I’m always paranoid about bendy toys.  overall, this guy’s quality control is great!  Nothing feels too delicate, nothing is incorrectly assembled, and he seems just as sturdy as all of the other Predators in the line.

As a “Deluxe,” the Predator Clan Leader will run you about $25 at Toys R Us, which is more than the other figures in the line.  It’s still less than a MOTUC figure, but the price increase is still pretty evident. And you know that this guy will cost a ton on the secondary market, so if scalpers buy the ones at your TRU, you’ll be stuck paying eBay prices.

Despite my minor little nitpicks, this figure is outstanding!  I honestly can’t complain about a thing – he’s got some of the best paint work from NECA, he’s sturdy without any quality control problems, and his design and accessories call back to the original figure in a nice little tribute that’s also its own thing.

Like I said, it’s a Toys R Us exclusive.  So check your local store first, since it hasn’t even shown up on the site yet!  I’d also watch Amazon and eBay, and I guess Big Bad Toy Store will start stocking them before long.

Look, I know I’m biased because I already really liked NECA’s announcement of August’s Series 10, But I really think that…

HAHAHAHAHA!!!!  This isn’t a retail figure at all!  It’s a CUSTOM Predator Clan Leader designed by none other than Jin Saotome, who does some really, really awesome work.  I won’t tell you how much I paid for this dude (he was on eBay. GASP), but everybody gets to splurge once in a long while.  And you know, I meant what I said – it’s a fantastic figure!  He’s got a place of honor on my shelf.  Now, if you’re not too offended by the practical joke, I’d suggest that you go take a look at Jin’s site for his other customs and occasional eBay auctions:

HERE is Jin’s site, And the entry for the Clan Leader is HERE