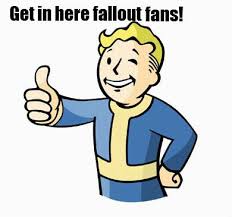 In 1997 Interplay Studios (RIP) released this timeless masterpiece. It has gotten multiple awards, it’s stolen countless hours of time better spent elsewhere, it ruined the innocence of my childhood with its unnecessary violence and kill sequences (also the place I my love for Energy Weapons). It’s been years, and people still play it today, for its memorable story and humorous violence and destruction (you literally nuke a church).

The story is this: after WW2, the worlds technology progresses at a much faster pace. How ever, America stays in the same cultural point as the fiftees. Sounds awful, right? It gets worse. Since China is a communist nation, and fiftees America hated communists, the go to war in the year 2075. The oil has run out, the European Commonwealth has dissolved into bickering, quabling Nation States, and presumably everyone in the southern hemisphere has died because of Famine that no one bothered to help. Great world, right? Well, two years later, in 2077, the world nukes itself back to the stone age. However, humanity lives on in underground Vaults buit by Vault-Tech before the war, for this very reason. They still charged for admission, despite that modern currency would be worthless in the Post-Apocolyptia, because plot.

This is where you come in. You play as the Vault-Dweller, an inhabitant of one such vault. It’s been two generations since the war, and no one has been brave enough to step outside this entire time. However, now it’s necessary as the Vaults water chip has broken. And everyone else is too much of a coward, so it’s up to you.

You first travel east, torwards another vault. Yours is Vault 12, the one you go to first is 15. No, I don’t know where 13 and 14 are. Before reaching the vault, you come across Shady Sands, a small tribal looking village, and do a couple jobs for them. You even eventually save the chiefs daughter, Pocha-I mean, Tandi. After doing a few things here,, you continue to Vault 15, which was apparently attacked and ransacked. You head to Junktown next, and do some more work here. You also get to make a fat man explode, which is fun/horrific.

Next is the Hub, and theres alot here. No water chip, but you can do work as a caravan guard, hunt Deathclaws, do some sidequests, or just stock up. Next is Necropolis, the city full of Ghouls, humans who’ve been exposed to way too much radiation, and are now rotting. If you do some work here, you meet Super Mutants. You can kill all the Mutants, and repair the water shed, and they’ll give you the water chip. Or you can just steal the chip from the vault and leave the Ghoulies to die, like I did.

You take the chip back to Vault 12, and then get sent back out by the Overseer to exterminate the Mutants so bad the Daleks would be jealous. There are multiple things you can do to help you in this quest, and people you can recruit, but the end is the same: You nuke a church where the leader is, then nuke the military base that hold the Vats of FEV. FEV is revealed earlier on to be what makes the Mutants.

The graphics were average for it’s time, but the plot is where this game stands up. I was so satisfied by nuking the fuckers that I couldn’t help but replay it a few times. All in all, this game gets a 9/10, and a giant Nerd Approval sticker from me.