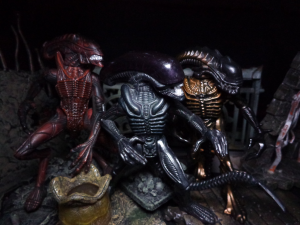 Hi, and welcome back to “Rid is unhealthily obsessed with Aliens and Predator.”  Wait, it isn’t unhealthy when I post ad nauseum about He-Man, is it?  Eh, whatever.  So, since I didn’t exactly cover everything in my last post, let’s go on!  And maybe, just MAYBE I might look at non-Kenner expanded universe creatures, like Razor Claws from the AVP arcade game, or those weird “White” alien-human-predator hybrids from that one comic.  But for now, let’s look at the Kenner Aliens!

Also known as the “Swarm” Alien, the Sonic Swarm is weeeeiiiird.  It has EYES!!!! Though granted, those eyes were just there so it could get full use out of its action feature.  The Swarm Alien is electronic, and when you press a button, its eyes light up and it makes screeching noises.  It’s also two creatures in one – a “flyer” and a “carrier” living in some sort of odd symbbiotic relationship.

Of course, since absolutely nothing about this figure is like any other Alien ever, we’re never going to see it again as a toy. 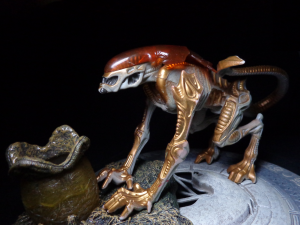 Sleek, graceful, and surprisingly tan, the Panther Alien is similar to the Killer Crab in the way it catapults little parasites after its victims.  The mechanism for this was great – slide its front legs forward, and the head bowed and the parasite flew.  And yes, you could adjust the position of those legs, no problem.  I always liked the little parasite, too – an odd, bat-winged shark-toothed thing with little folded claws.  Just what was it?  (whatever it is, it doesn’t photograph well. You kind of have to see it from all angles to understand.)

I’m not sure how likely this one is to show up, though it could reuse a lot of Alien 3 parts, easily.  The big thing is, I want to see a new update of that flying parasite! 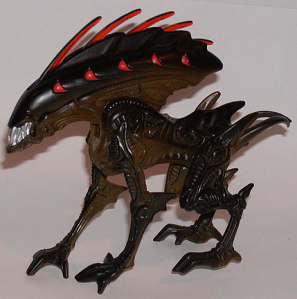 Another quadruped, the Wild Boar Alien had a HUGE head!  This was because its head was actually a repository for a row of quills which folded out when it lowered its head.  This creature is a gigantic brute of a monster, and actually is pretty fun even for a grownup.  its size also puts it almost in scale with more recent McFarlane and NECA Aliens.  Almost.

This figure might be a way to get some use out of the Alien 3 parts, but that head could just be too much to bear. 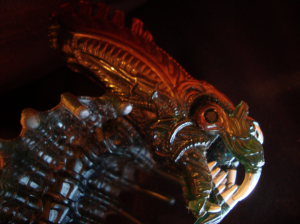 One of the creepiest and most creative designs, the Snake Alien had an amazingly complex jaw-snapping action feature, which made up for how hilariously out of scale the figure was, as well as how hard it was to bend its tail – the rubber tail couldn’t hold up to too much stress, and the wire was prone to snapping.  So really, even though the Snake Alien was one of the best-looking in the line, you were advised to keep it ramrod-straight.  I just pretended it was some sort of magic wand.

I don’t see this guy showing up as a figure, but I could imagine a small bendy as an accessory for another figure – please do that, NECA! 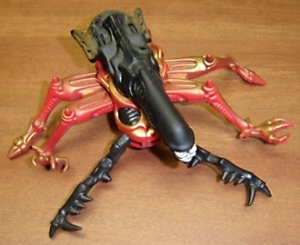 On the surface, a spider alien sounds like a great idea.  But sadly, this figure was just kind of underwhelming.  It had a very soft sculpt, an intrusive action feature, and was poorly-designed – pressing the button to make its legs stand up often knocked its rubbery head off!  That, and Face Huggers already fill the spider-ick role.

Sure, we’re never going to see anything like this remade, but you have to admit – at least its head is cool!

The Alien Resurrection line is a little obscure – it was out of scale with the regular figures, the toys were movie-only, and they were kind of underwhelming.  Oddly, it’s also responsible for the weird coloring on McFarlane’s Alien Resurrection Alien.  See, in the movie, they were a slightly pearlescent black, but the toy was brown.  And McFarlane’s figure was brown, too. Hmmmm… but the Aqua Alien was a unique addition to the line, and it just… it just makes sense!  I’m surprised we never got a fish alien or shark alien in the regular line!

Yeah, I could see this one happening – most of the figure could easily be reused, and it’s a good, generic enough design.

The Scorpion Alien was one of the three “Basic” Alien Warriors that Kenner produced.  Sure, it’s a little spiky, but it’s essentially the design from Aliens.  They later made a generic “Warrior” based on the suit from the first movie, and the tail end of the line saw the Acid Alien and Hive Warrior Aliens, two repaints of another generic mold.  But this one was the first, and it holds a special place in my heart.  It also had the best exploding action feature ever, and I wish more toys incorporated it (I think one Terminator figure and one Beetlejuice figure also did, respectively).

Since this is pretty much just a coppery Alien Warrior with a few more spikes… yeah.  If NECA ever makes Kenner Aliens, I’m totally calling this one.

Well, I think I’ve covered everything now except for the straight-up repaints (Night Cougar was just the Panther in black), and the two generic Queen figures.  So, what do you think?  Are some of these guys worth an update?

One response to “Life In Plastic: Kenner Aliens NECA Could Use (Part 2)”