Hi all, well its a bit late, but here is part one of my review of the new Tau Empire codex.

Ok, I’ve been thinking about the new book quite a bit the past few days and now I’m ready to give a definitive opinion on the codex. Part one will focus on a review of the codex and part two, which will be up in a few days, will have a brief rundown of all the units and a few potential lists to run (though I’m going to try and avoid making lots of WAAC lists because thats not how I think and its too early to start doing that).

So, onto the codex review! How does it differ to the old book and in what way does it change what we know about the Tau?

Presentation
Looks wise, its a pretty codex. All colour books have worked wonders for the presentation and in the case of the tau, makes everything look very dynamic and fresh and sci-fi like. Whilst the repeating motifs and borders don’t work in some codices (such as the chaos Codex, where it seems a bit too organised for Chaos), it works perfectly for Tau, as it reinforces the main Tau belief of unity.

Though there aren’t really any pieces or artwork that invoke the larger than life feel of 40K I don’t mind it as much. As a species, the Tau are still a very small player in the galaxy and the unique area of space they inhabit has protected them from some of the worst elements of the universe. As such it makes sense they wouldn’t really have encountered any large scale epic vistas, or participated in the sort of large scale event that typically becomes a two page spread in a codex.

There are some annoyances in the way things are laid out (having to flip between army list, the bestiary (which has no real orgainsation to it) and the wargear section is very annoying, as is flipping between a wargear list and the army list), but thankfully most of it is negated by having a fold out summary at the end of the codex and by clearly listing page numbers for reference.

Background
Theres not really an expansion in the timeline of the Tau and the clock seems to have been wound back and rejigged a bit to just after the Damocles Crusade. The third sphere expansion is occurring, but not without some difficulty. Most of the background has been focused of expanding the history of the Tau and reestablishing some of the core principals the run the empire. Make no mistake either, this is an empire, with all of the imperialistic moves and beliefs in a manifest destiny amongst the stars.

Now before a lot of Tau fans gets riled up and declare that the Tau are ruined now they have become ‘Grimdark’, don’t worry. The Tau are still a much nicer faction than the rest of the races of the 40K universe, happy to enter into negotiation and diplomacy with races and willing to let a defeated foe go. Its just that now, if diplomacy fails, they will happy go to war or sponsor mercenaries to do that instead, so the empire can ‘come to the rescue’.

The expansions are also contextualized (each expansion taking about 1000 years to prepare for which makes quite a bit of sense) and the stories of the empire greatest heroes filled in a bit more. Farsight is cast as a brilliant but jaded commander, which explains his defection a bit more. Shadowsun is now his equal too, determined to restore the honor of their mentor commander Puretide by leading the third sphere expansion in the way Farsight lead the second. 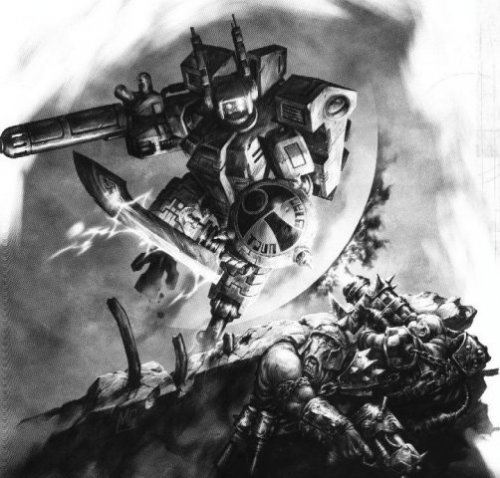 “I’ve seen things you wouldn’t believe – Entire worlds in flames, chains of supernovas on the edge of nothingness…”
O’Shovah goes all Blade Runner

More importantly it explains just how the Tau get around. Gone are the mentions of ‘skipping off the warp’ (in fact gone are any mention of the Tau even knowing what the warp is), Tau now have close to real FTL drives and utilise stasis pods to preserve their warriors as they travel between worlds. By mixing in the feel of both an early Imperium and Necron empire, the Tau come across as a empire with a future and worthy of their codex, which is one of the main complaints people have had in the past about having a codex.

Army list
As for the army itself, colour me impressed. Though there are some abusable builds in there I’m sure, the army is very balanced. By focusing on shooting, Tau are very weak against dedicated close combat. They have some defense in the form of ‘supporting fire’ which allows all Tau units within 6″ of a unit being assaulted to fire as if using overwatch (and as benefits from a Tau army, you can upgrade their overwatch abilities), but its not overpowered.

The whole army seems to have a lot more synergy as well. Though people may be drawn to the shiny new riptudes, I’m convinced that using a force similar to the old codex would work just as well. Though the army list doesn’t really focus on the ‘Empire’ part that well (with Kroot and Vespid being the old non tau units available), with a bit of imagination its completely possible to create a Kroot mercenaries army.

I’m also impressed by the many different builds available. Its possible to create a non battlesuit army, via Ethereals (that are now useful!) and Cadre Fireblades, a very heavy fire battlesuit force, a mech army and even a decent Farsight Enclave.

Jeremy Vinecock has created a wonderful codex with so many options, without falling prey to ‘Grey Knight syndrome’. This may annoy some power gamers, so I can’t see many playing it- preferring to stick to Necrons, Grey Knights or Imperial Guard. For the rest of us players it will be great though! I think it also has the potential to play at top tier as well, even if its not an auto win army. Long many it continue!

So there’s my thoughts! Stick around for my breakdown of each unit and some basic army list and thoughts on the meta game effect of the Tau.

To those who remember Tabletop Gaming news, I have some exciting news regarding that too later this week.