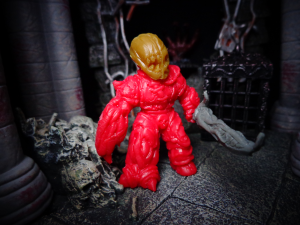 There has been sort of a mini figure renaissance, with nice new offerings like SLUG Zombies in retail, or the Kickstarter-funded Outlandish Mini Figure Guys.  One of my favorites, which I’ve shilled here more than once, are the companion lines of Gorewads and Universe of Violence, designed and sculpted by Eric Nilla and Jimmy “Ironmask” Rommel.  If it isn’t already obvious, the main theme with this line is violence.  VIOLENCE!  MONSTERS!  GORE!  HORROR!  Past figures have included Eyeklops, a one-eyed creature of raw muscle and tendrils, Brute, a malformed and hulking zombie; Deadface, a serial killer with a knife for an arm; Hell Turtle, a massive turtle with a demon’s face in his shell; Elephunt, a Fist of the North Star-esque brute with a removable helmet, and more!  Each figure seems to raise the bar on just how extreme these monsters can get, and the newest release is no different.

In 2013, they switched up their plan to rotating stock – a new figure each month, but only for that month (though I bet if you asked them nicely, they might find a way to help you out).  April actually saw more than one release, since their April Fool’s Joke was actually a valid set of figures, albeit only on sale for one day.

April’s regular figure is Essen, created by Eric Nilla.  He has no given backstory (none of them do), to encourage you to use your imagination.

Ziploc baggie in a padded envelope.  It’s an indy toy, after all. 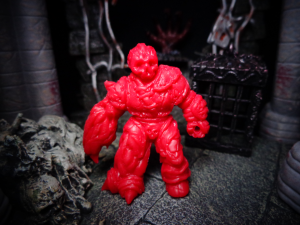 At roughly 2″, Essen is basic size for a UoV figure.  He’s bigger than a MUSCLE, but smaller than the truly huge UOV figures, like Elephunt.  He’s right in line with Eyeklops or Deadface, though, and towers over the smaller guys like last month’s Arn Hellstorm.  He doesn’t seem out of scale next to MUSCLEs, just tall – he’s not a small monster.

Essen is sculpted from a pretty unique rubber, though you’ve probably encountered it before if you’ve been touring the mini figure circuit.  It’s very flexible, but also really durable.  You can bend this figure a lot, though personally I wouldn’t risk it any more than another rubber figure.  If it helps, the rubber is springier than a Monster in My Pocket, and feels a little like an erase – though not as much as Kinnikuman Kinkeshi.  It’s actually pretty durable, and won’t show much wear and tear from riding around in your pocket.  Some UoV figures are glossy, and some are not.  Essen falls right in between – he’s not shiny, but he’s not as rough-cut as Elephunt was a few months ago.

The level of detail is astounding.  Understand, this guy was sculpted in the scale that you see – by hand!  It doesn’t show up too well in the pictures, but he’s a rotting, mummified, mutated, dripping, stitched-together amalgam of skeleton, zombie, mummy, Frankenstein, and I guess a Resident Evil mutant.  His head is half of a decrepit skull, but his right arm and leg are huge, fleshy, and deformed.  He’s wearing patched-together armor, and I love all the little cracks, gouge marks, and pitting in it.  It looks great!  I’d be interested in what Essen would look like with a full paint job. 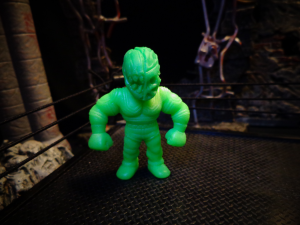 Toys in this scale never eeally get accessories – Battle Beasts had weapons, Predasaurs come with some, and some Kinkeshi have removable parts, but I really can’t think of anything else.  Small parts usually don’t cost out, and hey, a kid could lose or choke on them… but then there’s this guy!  Essen comes with a removable sword and helmet.  The sword is huge, and surprisingly fleshy – it reminds me  alot of Nightmare from Soul Calibur, if you get the reference.  It fits quite snugly into his hand, and I haven’t seen any stress marks yet, which is an immensely good sign!  He holds the sword straight out, though, not in a very dynamic pose.

Essen’s helmet is a dual-sided mask – one half is a skull, the other is an eyeless, toothy mouth.  It’s creative, and blends in with his body so well that you almost wouldn’t realize it’s a mask!  The mask also fits on other UoV figures, like Arn Hellstrom – or even plenty of MUSCLEs (as pictured above, haha)!  It fits nicely over his head, and the texture of the rubber helps it grip pretty securely. 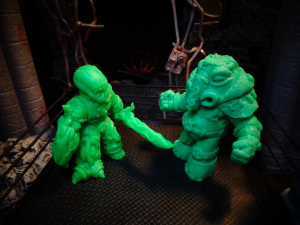 Well, it’s unpainted, but Essen comes in a huge variety of oclors.  You can choose to order him in either solid color (body, mask, and sword are the same), or mixed (body, sword, and mask are different).  The color is random, though you can request one if you want.  One out of every five Essens will be glow in the dark or thermal, and the rubber that these guys use provides a nice variety.  Do you want orange glow-in-the-dark figures?  Sure!

And of course you can get Essen in MUSCLE flesh tones.  It’s the unwritten rule of mini figures everywhere. 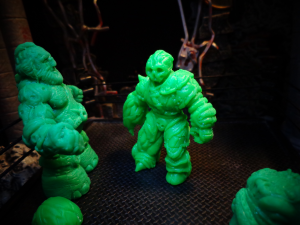 Essen is $14.  Now, I know what you’re thinking – $14 for two inches of rubber?  Why?  Well, it’d be an awful price if this were a mass-market figure, but it isn’t.  Custom and indy toys take more money, time, and effort to produce, and $14 is INSANELY low.  Most toys of this type cost $20-$25, and wouldn’t come with any accessories!  And yes, I know that OMFG has cheaper figures, but they’ve also got a factory in China.  Universe of Violence has a workshop in somebody’s home.  For what they are, these figures are really inexpensive.  Just realize that with indy toys, you’re gonna have to pay a little more.  The indy toy factor removed half a star from the score, but don’t let that deter you! 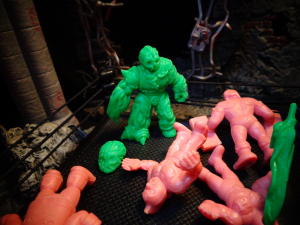 Look, I can’t compliment these toys enough.  If you like mini figures like MUSCLEs, then universe of Violence is a dream come true!  And keep in mind, Essen is available for a limited time only, so hurry up and snag one!

WHERE TO BUY:  http://ericnilla.storenvy.com/ .  Really, did you expect anything else?  And be sure to check the store often, as they constantly bring in new stock!