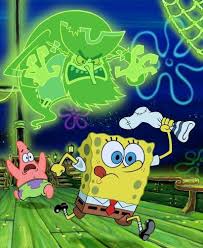 Look, I know todays FFF is rather short, but seeing as I have other engagement’s today and the fact that I didn’t even want to do one, you’re damn lucky you got this story (by AbusedAptitude) at all. Also, you get a surprise tomorrow. So, shut up, and let’s get started.

Note: This story contain graphic attempts at describing sexual interxourse, usually between humans, but occasionally between other sentient creatures. It is very stupid. Reader Discretion is Advised.

The Dutchman screeched out a bone-chilling growl for what felt like the hundredth time that evening, only to have Spongebob reward his efforts with a blank stare.

“What’s the matter with ye’, boy? Why aren’t ye’ runnin’ around all scared-like?” the phantom pirate probed.

“Well, it’s just that…” The sponge began tentatively. “I-I’ve seen all your tricks.”

The specter rocked back from the sheer shock of the blow. “What?! What do ye’ mean ye’ve seen all me tricks?”

“Well, I mean that I’ve seen you try to scare me in every way possible.” Look, Spongebob is about to get fucked by a ghost. They can’t all be winners.

Spongebob shrugged. “I’m sorry, Dutchie, but your tricks just don’t work on me anymore. You’ve already used them all. There’s nothing you can do to scare me now.”

THAT’S LITERALLY WHAT I JUST SAID

At this, the Dutchman stroked his beard thoughtfully. Nothing he could do, eh? “Oh, I’m sure I can think o’ somethin’…” he said, a sly glint in his eye that for some reason started to make the boy think twice about what he had said. The air around Spongebob seemed to get colder as the ghost grew nearer to him.

Strangely, I think the same just happened to me.

Chilled, the sponge wrapped his arms around himself and began to rub. “Uh, Dutchie? Do you think you could hold on a second? I’m just gonna turn up the ol’ thermostat,” he finished with a nervous chuckle and began to back away.

Is it just me, or are these worse when the characters are, you know, in character?

In a flash, the Dutchman had blocked his escape. “Ohh, I don’t think that’ll help you now, lad,” he purred into the boy’s ear, sending chills over his body. Suddenly Spongebob felt his light frame being hurled across the room into the kitchen. He landed with a soft thud against the sink, only to hear the phantom entering the room chuckling to himself heartily.

Remember, the next time you feel a chill, it’s just ghost trying to rape you. Calm down.

Then he took on a more serious tone. Looking downward at the sponge’s already-defeated form, he grinned. “Time to earn yer sea legs, me boy.”

As someone who’s talked to an actual sailor in the U.S. Navy… that’s not what that means.

And the ghost was upon him. Tearing at the top of his collar, the Dutchman ripped open his shirt with ease. The removal of the boy’s pants soon followed and before he knew it, Spongebob was clutching to his last shred of dignity, praying to Neptune that his underwear left more to the imagination than he thought.

But all his pleas were in vain, as the specter was already stripped down to his own skivvies and as he turned to face him he snapped his fingers. The tortured sponge could plainly see a devilish look in his eyes. The snap had served its purpose. Looking down, Spongebob realized he stood naked before the ghoul, open to his every whim. The Dutchman pounced upon his springy yellow flesh and held him against the cupboard as he slowly removed his extension from what was left of his clothes and pushed it inside the screaming sponge, ignoring all but his ultimate goal.

Pounding frantically against the apparition’s chest, Spongebob cried out for mercy. But it wouldn’t be over until the deed was done.

An eternity of suffering seemed to pass between the moment Spongebob felt the trickle of blood begin to flow and the relentless pounding of the Dutchman eventually cease. Finally he felt the sweet release of emptiness followed by the deep, cutting pain of salt water in his wounds as his captor pulled himself from inside his body and exploded onto his stomach in a messy paste that was as sticky as it was frosty. The substance would have been cream-coloured, had it not been enveloped in a ghostly greenish glow.

The boy was left in a crumpled mess on the floor as the Dutchman backed away from him to redress. Ironically enough, Spongebob could probably best be described at that moment as a ghost of his former self. He groaned in agony, struggling to sit up while fighting against the deep, throbbing pain in his most sensitive hole. The boy sniffled softly, trying his best not to draw the attention of the otherworldly man as he wiped the tears from his eyes. Finally, he gained the courage and willpower to stand and face him. “Why?” he asked almost silently.

To be fair, even I wouldn’t wish rape on Spongebob, and I hate him. Maybe because then I would have to imagine him getting raped.

The ghost ignored him, so he tried a slightly bolder tone. “Why did you do that?” Spongebob’s voice wavered slightly as he went into a high-pitched whine.

He was only met with a fit of laughter. “I’m a ghost, lad. And a ghost is only as good as the screams he earns.” The statement was finished with more hearty laughter as the specter disappeared into a puff of green smoke.

To be fair to the Dutchman, Spongebob is full of holes…

The laughter would ring mockingly in Spongebob’s ears for some time afterward. After painstakingly dressing, he made his way over to the sink to wash himself off just as Gary entered the kitchen, searching for a snack.

“Look like I’ve seen a ghost? Don’t be silly, boy. There’s no such things as ghosts.”

Yep, just like Rape and My Little Ponies. THEY DONT EXIST, SO SAYS THE SPONGE.

Fan Fiction Friday owes its inception and existence to Rob Bricken, formerly of Topless Robot, where you can read all his old and mind destroying creations.

2 responses to “FanFiction Friday: Spongebob and the Flying Dutchman in “Dutchie Gets His Groove Back””