DISCLAIMER:  THE FOLLOWING REVIEW WAS ORIGINALLY WRITTEN IN MAY 2011.  IT WAS SUBMITTED TO MWC TOYS, BUT GOT LOST IN THE SHUFFLE DUE TO TECHNICAL DIFFICULTIES.  THE PHOTOGRAPHY REPRESENTS MY PHOTOGRAPHIC SKILL CIRCA 2011, SO PLEASE BE GENTLE.

ALSO, SEE IF YOU CAN SPOT HOW I SUBTLY SHOWED OFF MY MASTER’S THESIS.  I’M SUCH A CAD.

It’s no secret that Hasbro has been running sort of a Predator theme lately.  Spirit is Billy, Recondo is Blain, the Jungle Viper has a kind of super-camouflage, and Stalker has always looked like Carl Weathers.  So, now we have Shadow Tracker, who’s got a mask, dreadlocks, a big spear, and is some kind of expert hunter.  And yet Hasbro went the extra mile with this guy, as Shadow Tracker’s design does more than emulate the Predator.  He has elements of Skull Buster (a unique Range Viper who took on the “skull mask and dreadlocks” look in the comics), Jason Vorhees, and even bits of Croc Master or Zartan.  The result is a unique new baddie in G.I. Joe who even die-hard old school fans seem to like.  Shadow Tracker first debuted at the 2009 JoeCon, but then never materialized when he was supposed to.  The resulting fan outcry was enough for one of the Joe toyline developers to actually say “SHADOW TRACKER WILL BE RELEASED.  PLEASE STOP HARRASSING ME.”  And now he’s finally here as part of the 2011 Pursuit of Cobra line!

According to his filecard, Shadow Tracker is a hunter who “scorns conventional firearms” and uses “traditional weapons from around the world.”  More on this later.  He’s also described as a scary guy who “tastes his victim’s fear in the wind,” and I guess he also hangs them upside-down from the treetops and collects skulls as trophies because hey, why not?  A summary is:  Shadow Tracker’s a creepy guy.

Shadow Tracker’s packaging is typical for the Rise of Cobra line.  You can see the figure, you’ve got some good art, he has two trays for his accessories, and he’s got a filecard in the back.  There is nothing wrong with this, except that Shadow Tracker’s filecard is pretty scant for a guy with literally no other information anywhere else.  There really isn’t anything else to say.  Joe packaging is functional, has some cool artwork, but has nothing particularly exciting going on. 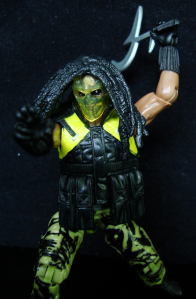 Shadow Tracker looks great, but that’s not the only thing.  In a miraculous move for this line (or really any 3-3/4″ line), Shadow Tracker is made of 100% new parts!  None of the pieces of his sculpt are reused from anybody else, although his torso resembles Spirit’s just a little bit.  You can remove his jacket by taking off his head and manipulating one of the arms, and you’ll find that he’s actually a little skinny.  Sort of.  Shadow Tracker’s torso is kind of narrow, although he is well-built – you can tell in the shoulders.  He’s just not a very broad guy, although this may have been to make the jacket look more natural on him.  His head isn’t as big as it looks at first, but that’s because of the mask and hair. Shadow Tracker’s dreadlocks are sculpted in two pieces, and although they inhibit some head articulation, they don’t really get in the way of his arms.  if you look, they’re parted at the perfect spots for his arm movement.  His mask is rather creepy, and just translucent enough to hint at horrible things underneath.

Now, the mask is glued on, but much like the movie Cobra Commander’s mask, it can be removed, and there is a fully-sculpted face under there.  Well, kind of.  It’s not a “face,” it’s a “half-burned skull.”  Shadow Tracker is creepy!  I wish I knew what happened to him, because I don’t think he’s a zombie.  I didn’t remove the mask on mine, but you can find out what it looks like with a quick google search.  Just look up “shadow tracker face,” and you’ll find pictures on at least two review sites! But yeah, he’s seriously creepy, mask on or off.  And whether he has his jacket on or off, he looks pretty intimidating, too.

Shadow Tracker’s right hand is specially-sculpted to hold an arrow realistically, and it functions for a lot of his other accessories, too.  Unfortunately, his hands (both of them) are just a little too wide-open for the majority of his accessories, and you might want to try putting him in the freezer to close them somewhat.  They do hold everything, but will feel kind of loose for some.

Well, the thing with Shadow Tracker’s paint is, do you mind neon colors on your G.I. Joes?  I mean, it’s not like they’ve been sporting them for twenty-five years, right (my favorite is Slice, because neon orange is the best camouflage!)?  Shadow Tracker’s colors are mainly  black and neon green.  His own skin is dark – he’s black, but kind of a middling shade, not as dark as Roadblock or Stalker. There is no paint slop on mine, and even some of his accessories are colored – not all, but some.  The paint on his unmasked face is kind of sloppy, but overall creepy, and you’re not supposed see it, anyway. 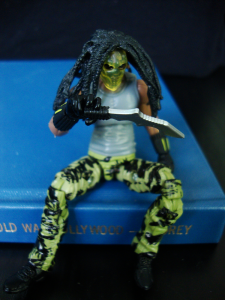 Shadow Tracker manages to simultaneously have great articulation and kind of so-so articulation.  For the good, he’s got all the joints most modern G.I. Joes have, and then some – he even has special extra wrist joints that allow him to do some awesome things.  He can hold his spear in convincing martial arts poses, do a handstand, or (best yet) – he can draw his bow realistically!  Understand, if you’re a real archer, the arm holding the bow must be straight (So your arm supplies the best support against all that pressure).  Your other arm should be drawn up, perpendicular to the bow. Most archers bring their hand near to their cheek so they can line the arrow up right – it needs to be straight, after all.  Shadow Tracker’s jacket and dreadlocks get a little bit in the way of his arm articulation, but by carefully working his shoulder, elbow, and wrist, you can line them up just fine.  It might be a little easier to angle the bow a little, but you can do it straight, too.  In fact, of all the poses you can put Shadow Tracker in, drawing his bow seems to be the most popular.  Don’t skimp on the others, though.

Shadow Tracker has too many accessories.  And as it turns out, this is not a bad thing!  Just be careful not to lose them.  Now, his filecard says that he uses many traditional weapons “from around the world.”  So, let’s look at them!  Along with a standard Joe stand, he comes with:

-Long black knife (Ballistic knife, the “spike” on the handle is actually a trigger to launch the blade.)

-Net (can be drawn closed or opened flat) 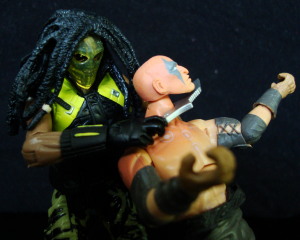 It’s kind of funny how he disdains “modern” weaponry, but has a knife that can shoot you.

The only problem with all of this is that he has no way to carry it all.  There are ports on Shadow Tracker’s upper back (the backpack port), lower back, and hip, as well as on the blade of his spear, oddly enough (you can stick the ballistic knife or the bola there).  That’s all well and good, as there are just as many pieces with pegs, including the quiver, which can be placed on his back or hip with ease.  His loose arrow clips into the quiver, the compound bow can slip between his quiver and back, he has a small sheathe for the tiny knife, and he can hold the other items in his hands.  This still leaves with some overflow, as the karambit, kukri, spear, and net do not fit in any of those ports.  It’s too bad that he can’t carry everything, as it could have been quite simple to include spaces for everything.  Personally, I would have loved something to hang the za or karambit on, as they are too awesome to let go of just because he has his bow.

In the end, it’s totally all right – most of Shadow Tracker’s accessories are pretty exclusive to him, although the bow, quiver, and arrows came from Spirit.  As for his bow, the horizontal rod is not a sight.  That’s a balancing counterweight, and goes beneath his arm.  Unfortunately, Shadow Tracker’s left hand is just a little too wide open to hold the bow comfortably the “right” way. Although it’s possible, it’s a little tricky to keep it from tilting the wrong direction.  Remember to line up Shadow Tracker’s arrow with the little ledge on his bow, and all is well! 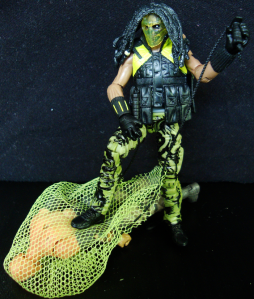 Shadow Tracker will run you $6-$8 at retail, which isn’t as good as it used to be, but is certainly refreshing for what you get with the figure.  If you buy him secondhand, expect to pay $15 or more, which is kind of sad.

Shadow Tracker is fun.  I keep wanting to find new poses for him (although I always end up back with him drawing his bow).  Maybe he’s crouching in the foliage.  Maybe he’s cutting some poor Joe’s throat.  Maybe he’s practicing with that spear.  Maybe he’s about to throw the za or the bola.  No matter what I do, he still looks cool! 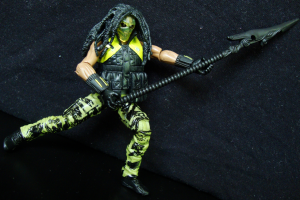 All of my complaints about Shadow Tracker are minor.  He could have used a few minor improvements (like making his left hand tighter, or more weapon ports), but overall Shadow Tracker is simply fantastic.  If the new creatures are like this, then I want more!  It’s very refreshing to get new characters after the constant reiterations of Duke and Snake-Eyes (there are currently 54 different Snake-Eyes figures right now. Fifty-four!), and I hope this guy sells well enough for Hasbro to make more!

And yeah, sure, he looks a little like the Predator.