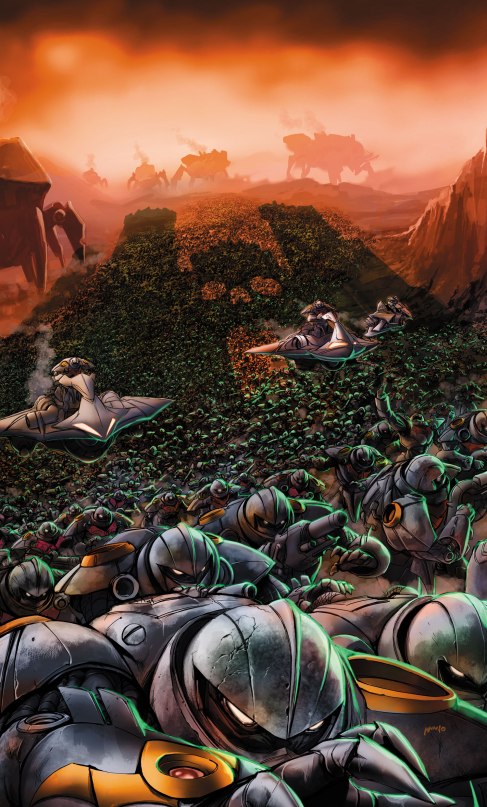 A few weeks back I reviewed the first two issues of the new He-Man and the Masters of the Universe ongoing series from DC comics.  I said I might pick up #3 to see if they could make it any more terrible.  If you would like to know more then I welcome you to read on.

The issue begins with the best visual sequence this comic has produced so far.  Teela is having flashbacks to her childhood remembering her imaginary friend Adora.  It is just three pages of little Teela and little She-Ra being friends and it is kind of cute but the whole thing is almost ruined by the conversation He-Man and Teela are having as she tells the story.  In the previous issues their dialogue seemed like generic friendly bickering but now it is starting to sound more like two people who just straight up hate each other.  He-Man continues to be incredibly bland.  Teela continues to be a condescending jerk to everyone.  Last issue she talked at great length about how much it sucked that Mekaneck was not killed in battle and in this issue she insults him to his face and calls him names.  Evil She-Ra soon attacks and kidnaps Teela.  We see Hordak again looking as generic as ever and bragging about how they kidnapped and brainwashed Adora and turned her into Evil She-Ra and not even the power of Teela’s friendship will save her.  Which I am inclined to believe because so far it looks like Teela is a terrible friend and comrade.  He-Man considers disobeying his father to run off and save Teela for some reason before the spirit of the Sorceress appears to him and he walks into a door of light and vanishes for some reason and the issue ends.

So this comic book still has all the same problems it had before but one of them I see in a new light after doing some research.  It turns out that She-Ra’s origin from the animated series is the same as the one she has in this comic book.  Princess Adora was kidnapped as a child and turned into a servant of Hordak but then she learns that she is He-Man’s twin sister and she turns good and becomes She-Ra.  They are just telling that origin story over again but now it has all that “gritty” and “realistic” stuff that was all the rage over a decade ago.

Another thing that puts a new perspective on the matter are the words of the series writer Keith Giffen himself.  In an interview over at Comic Book Resources to promote the upcoming MOTU vs. DC crossover mini-series Giffen talked about the He-Man ongoing and revealed some interesting information. http://www.comicbookresources.com/?page=article&id=45517

Giffen is not making the creative decisions on the series; he is just writing what he is told to write by Mattel, the company that owns the He-Man brand. I can’t imagine what kind of thinking is going on at Mattel.  I was under the impression that the point of the comic book was to promote interest in their product.  Everything about how they are handling these characters and story just screams bad business to me.  Who exactly are they trying to sell their product to?  Nostalgic MOTU fans?  Maybe but they seem to be alienating as many as they draw in.  Comic book readers?  I don’t see how this is going to make them any more or less interested than they already were.  Kids?  I can think of a lot of series doing a better job appealing to kids.  Are they even going to bother using She-Ra to appeal to a female audience?

I was all ready to be angry and quite reading this series but my new knowledge of She-Ra’s origin has given me another idea.  I am going to stop buying this series for now, but I will pick it up again as soon as She-Ra is in it.  The only thing that interests me about this series anymore is how they are going to handle She-Ra so I am just going to wait until that happens and skip the rest.  I may check out the MOTU/DC crossover mini series and give it a review but I make no guarantees.