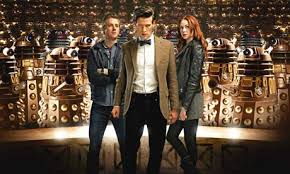 Last week, I presented to you the question “Could the Doctor beat a Xenomorph hive?”. The answer: nothing, because apparently either no one read it or no one wanted to comment.

But, what I did get called out on was that I called the Doctor an Anti-Hero. Someone said that he is just a hero.

Now, the term Anti-Hero is highly subjective. My definition, however, is ‘A hero who does things which could be considered evil’.

The Doctor has, on multiple occasions, committed genocide. He has destroyed buildings, property damage galore. If that isn’t evil, I don’t know what is.

But he did that in the name of good, and was able to save many innocents by doing so.

But, I thought I’d make it the topic of this weeks debate, so that you could all tell me how much of an idiot and a retard I am, and clearly it doesn’t count because those were Daleks, and that I don’t know what I’m talking about, etc., etc.