Well, it seems that waiting for the 50th anniversary special is not the only thing we have been on the edge of our seats for. I had some issues that created the void of these articles. I more then appreciate how much Reecemjones helped me out with covering the end of the first series.  And like our favorite Time Lord, the song ends but the story goes on.

Airing Christmas Night 2005, The Christmas invasion introduces in my not so humble opinion one of the best Doctors of all time.  Russell T Davies once again takes control of the Doctor’s fate. Dialog is a joy with allot of banter between characters.  Though the show takes itself somewhat seriously, you have a real feeling that it was fun to do.  The story takes a cue from the Fifth Doctor’s regeneration, Russell T. Davies relies on characters from the previous season, using the new Doctor sparingly. You get a few scenes with him through out the episode. Just enough to wet your appetite for more.

Billie Piper continues in her role as Rose, and all the growth the character has gone through really shows. No longer the scared and lonely child, Rose takes charge of the situation. Even though she is fully confused by the Doctor having a new face, and approaching despair because of how the Doctor is ill. As if having her best friend/someone she falling in love with isn’t stressful enough, fate decides to drop an invasion of Earth by the Sycorax, an alien race that has the ability to control all the A+ humans on the planet. This is made possible by a blood sample that one scientist had included in a probe that was in route to other planets, a project brought together by Harriet Jones’ government.

Penolope Wilton steps into the shoes of everyone’s favorite Prime Minister, Harriet Jones. Since we last saw her in that Gods awful unrelenting assault on the senses that was “Aliens of London” and its sequel “World War Three”, Harriet Jones was elected Prime Minister by an overwhelming landslide vote. She has pushed things through Parliament and brought on Britain’s golden age. Honestly no one else would have worked for this particular invasion. Thanks to her previous encounter with the Slitheen, Harriet Jones knows that there is a protector of Earth, but at the same time is not afraid to take the situation under control herself. Granted there are times she does get nervous, and that shows with her constantly showing her ID to everyone and proclaiming “Harriet Jones, Prime Minister.” Which leads to the best running gag in the show. “Yes. We know who you are.” Penolope Wilton does such a brilliant job as Harriet that you really can’t see how there was anybody else considered for the role. The way she plays Harriet, you truly feel that she is the type of person you want in government.  Optimistic about the future and humanity, she is willing to gamble and try something new. And if that something ends up back firing and causing problems, then she the first one to take responsibility for her mistakes and do what ever is needed to fix them. The only reason Penolope doesn’t completely steal the show is because she is out shown by David Tennant.

Noel Clarke once again plays the bumbling lovestruck idiot Mickey Smith. Yes,Yes, I know he is much more then that but at this point in the story, he still an idiot, and still hopelessly in love with Rose Tyler. So please keep your knickers out of a twist and allow us to continue.  Mickey is here to move the story along and be a sounding board for Rose. He helps her out when she starts to lose her way, refuses to leave her side even when teleported up by the Sycorax.   There something about his situation that just makes you feel for him. Don’t get me wrong. I love Mickey as a character. He goes through so much. But at this time, he just starting to realize how much he is outclassed by the man with two hearts. He is desperately trying to be the man he thinks Rose wants him to be, and ends up being not much of anything.  Noel pulls the man over his head act off fantastically.

Camille Coduri also returns as Jackie Tyler. The woman who is quite happy with who she is and only changes when absolutely forced to. Yet she will do anything for her family and friends. Her willingness to help leads to her taking care of the Doctor.  While it seems like her character was relegated to a smaller role this time, Jakie’s willingness to listen to Rose and connect her with the everyday life allowed Rose to keep her perspective and gave her the strength to keep fighting even when it seemed that absolutely nothing was going to work and all hope was lost. 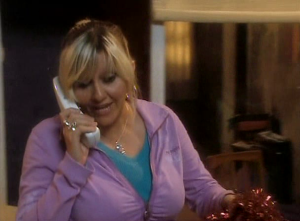 The more astute of you may have noticed something decidedly lacking in this review. I mean it a Doctor Who review, and yet there seems to be very little Doctor. There is a reason for that. There very little Doctor in this episode.  But when the Doctor is fully awake and alert, you suddenly realize that it was worth every second of the wait. 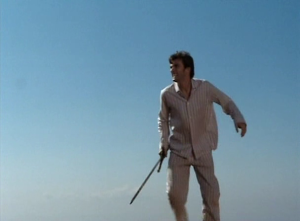 That my fellow Whovians and casual viewers, is the Doctor, in his pajamas, holding a broadsword.  Ten minutes after waking up, the Doctor has foiled the plan of the Sycorax by disrupting their blood control, making them look like fools in front of their intended victims, picked a fight with the leader of the Sycorax and made the fate of the world its stakes. All while running his mouth and being a charming prat.  As stated previously, I find Tennant one of the best Doctors ever only trumped by Baker and tied with Smith. From the second he wakes, you have no doubt that this is The Doctor.  His banter and “gob” just fill the roll so well.  Even before he gets dressed in his signature costume for the 10th Doctor, you have no doubt that he is the Doctor.

So the Doctor defeats the Sycorax leader, offers him and his people their lives in exchange for getting the hell off the planet and never returning.  He tells them that this planet is protected. All within his rights as victor according to the duel he just fought. When the Sycorax leader tries to break his word, we see the steel is still in the Doctor’s make up as he without hesitation drops the Sycorax off the edge of the ship. Sending them on their way after making sure all the people that were teleported to the ship were returned, he explains to Harriet Jones that they are heading out to space with the message that they were given, Harriet Jones has Torchwood fire a laser that they had scrounged and repaired from a previous alien encounter, blowing the Sycorax ship to hell. 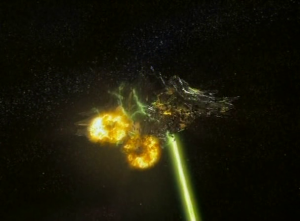 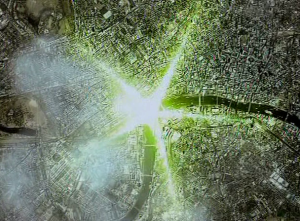 It’s at this point that I disagree with the Doctor.  He flips out on Harriet and promptly verbally attacks her. Fine so far. She points out a very obvious fact. The Doctor isn’t always there to protect the human race. And these creatures were heading out to the universe to tell of Earth and all its treasures. Humanity had to protect itself. Not really understanding how much the call to fire was weighing on Harriet’s concision, he promptly tells her aid that she looks tired which leads to her leaving office.  For this the Doctor is wrong. Oi, put down the stones he has been wrong before.

The use of practical and cgi effects were well done. Neither overshadowed the story nor distracted from the brilliant acting.  The blend of the two left you completely immersed in the story. Everyone involved show why the show is so loved.

Murray Gold did a wonderful job on the score, and while a tad overwhelming in places, on the whole it really enhanced the whole feeling of the episode to near perfection.

This Christmas special was a perfect start to a wonder filled season. The tone and pacing were absolutely right, hitting the ground running and not stopping.  The momentum was fantastic and the joy that the cast and crew had while making this showed in every frame.

Well my fellow Whovians, with November a forever away, our Waiting for the Doctor continues. Till next time.