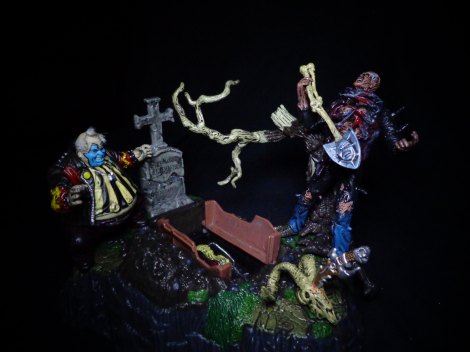 Okay, so Spawn: The Movie wasn’t exactly a cinematic work of art. Okay, so maybe it was worse than Daredevil. But it was better than Steel, right? RIGHT???? 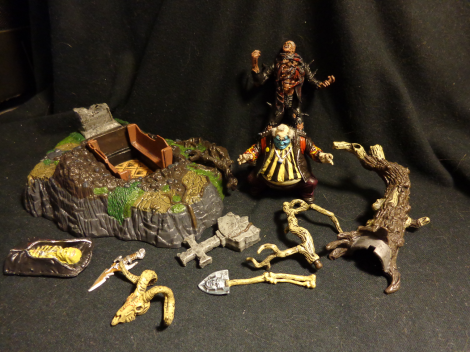 So, early on in the movie, when the resurrected (and crispy) Al Simmons refuses to believe that he had died or made a deal with the Devil, his clownish demonic handler decides to take him to his grave and show him his own corpse. They argue, Clown shows Al the grave, they argue some more, Clown gives him a freaky shovel, Al digs up his own grave and opens the coffin, goes bonkers at the sight of his body, and breaks his tombstone. Meanwhile, a bunch of teenage idiot satanists are attempting a ritual in the graveyard, but get scared off when Al becomes Spawn for the first time. That’s what this set is for – it’s got elements from every part of that scene I mentioned, even the Satanists.

The Graveyard is probably the smallest of the three Spawn Movie playsets, though it’s not insignificant. I only got mine recently at a toy show, but I can already see it becoming reaaaally useful for any zombie toys I get. 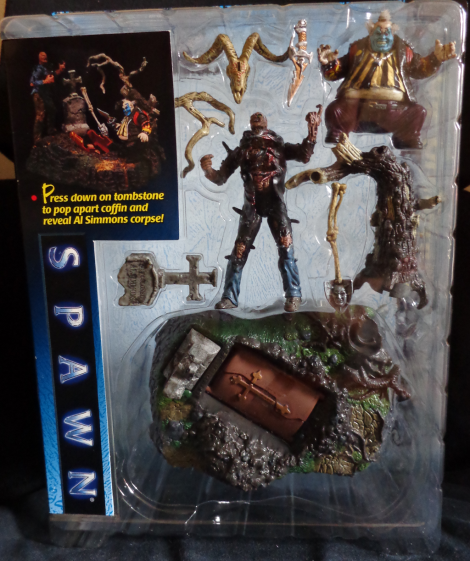 The Graveyard is an old-school McFarlane toy, so it’s in a typical plastic blister on cardboard backing. It displays and protects everything in the set, and shows off the whole line in back. The huge blister doesn’t age well, though, and has a tendency to just fall off after a few years. This is not a toy for a MOC collector. 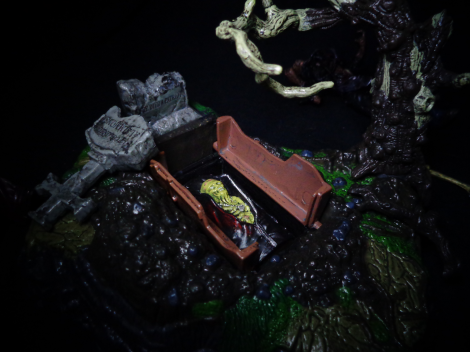 The Graveyard is the smallest in surface area of the three playsets – it has more walking-room, but it still feels a little cramped. I’d put it at 3″x5″, though it’s not a rectangle. For the most part, the detailing is pretty good, especially in the little details – the inside of the coffin is quilted like in real life, you can see the mound of dirt that Spawn had dug up, the tree is pretty gnarly, and the tombstone is great. Al Simmons’s tombstone reads, “Lt. Colonel Al Simmons – He Died A Patriot.” Actually, he died a murderer, which was why he went to Hell in the first place. The tree is pretty twisted, with a spare branch that can plug into one of two spots – but if you plug it in the top, the peg hole on the side becomes way too visible, so I’ve kept mine in the side. Unfortunately, the sculpting begins to falter in the dirt and roots surrounding the grave, as the detailing just begins to look soft, like something out of a cartoon. Burnt Spawn shows you the reason why he wears that full-body suit and mask – the dude’s a crispy critter! The figure captures him in the exact moment when he transformed from undead Al Simmons to Spawn – and I mean the exact moment. His clothes have just started to go all crazy-swirly, so we’re talking less than a second here. It kind of limits the figure, as it’s not TRULY Burnt Spawn, it’s Mid-Transformation Spawn. Despite that, the detailing is fantastic, both in his tattered clothing as well as his horribly mutilated body. It’s probably the single most horror-themed toy in all three playsets, which says something – just its transitive nature limits play a little bit. 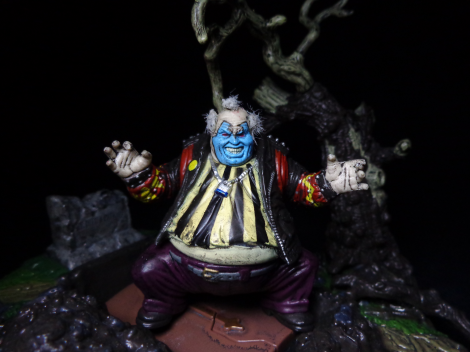 Clown is annoying and I want to punch him in the face.  He’s also a pretty short guy, with the figure barely topping two inches. And with one huge exception, his sculpting is fantastic – it looks just like John Leguizamo in fat-guy makeup! The clothes are great, the belly is disgusting, and his face… wow, his face has the detail of something in a much larger scale. But it’s got one huge, gigantic, glaring flaw – the rooted hair. I don’t really like soft goods or rooted hair in toys, and this guy proves why. Each of the tufts of fur on his scalp is a little plug that’s glued into a hole on his head. And mine went bald immediately, as the glue holding it in had long-since deteriorated. I had to reglue his hair with an INCREDIBLE STEADY HAND. Seriously, the rooted hair is awful. It actually looks okay, it’s just too much of a liability. Normal basic friction is going to rip it out again someday, and I hope I can manage to retrieve the hair and glue it back in once again. The Graveyard’s paint has good points and bad points. The tree is great, the tombstone is excellent, and the dirt is mostly in the right spot. The ground just looks a little sloppy, which somewhat muddies the details together. 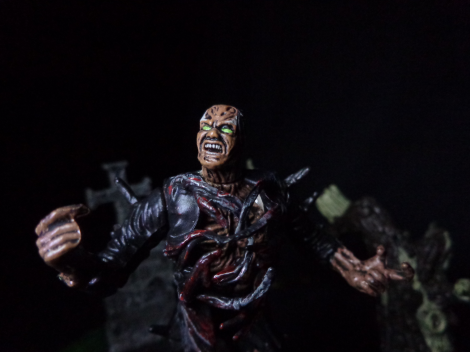 Spawn is dingy, bloody, and crispy. His paint just makes him look more like a mangled corpse, which is exactly what he is. His clothes are also great – you can see what parts were burned and what weren’t. Yeah, he didn’t do very well. 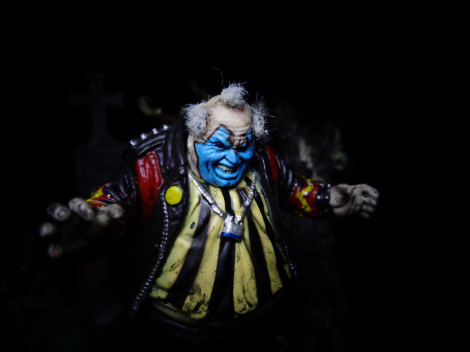 Clown’s paint is nearly perfect – nearly meaning that his smiley face button lacks its smiley. But other than THAT? Purple pants, leather jacket, striped shirt, filthy skin, and horrible greasepaint. Clown’s eyes are red to match the comic, which is a nice touch. Even his teeth are good, despite being just one color. I find the fire patterns on Clown’s sleeves to be kind of interesting, because those were part of the movie design that were not included in the comic. 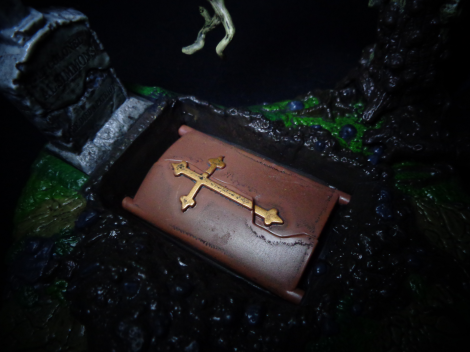 The Graveyard tree tips and falls over pretty easily, though that may just be a side effect of how it’s a separate piece. More importantly, the Graveyard has an action feature! If you press down on the tombstone, then Al’s coffin bursts open, revealing the corpse inside! The spring feels pretty tight, and it works well. It also fits in with the breakable tombstone – you can break it to open the grave if you want. I like it. 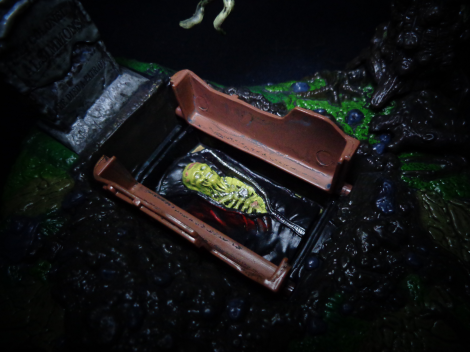 Spawn moves at the Big Five – swivel head, shoulders, and hips. The problem with this is, he’s really only got one pose… or so I thought. Turns out you can make him stoop over or lean back, and of course his arms look fine in more than a few poses. But it’s a little more limiting than Spawn in Spawn Alley. 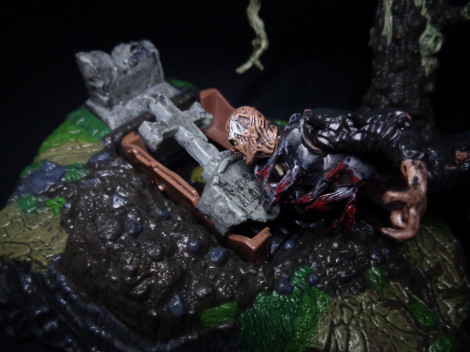 Clown’s articulation is a little more limited – swivels at his head, shoulders, and waist, with nothing for the legs. All of the joints feel really tight, and you will probably have no reason to move anything except the arms. his legs are nice and steady, but twisting his head might hurt that rooted hair a little bit. 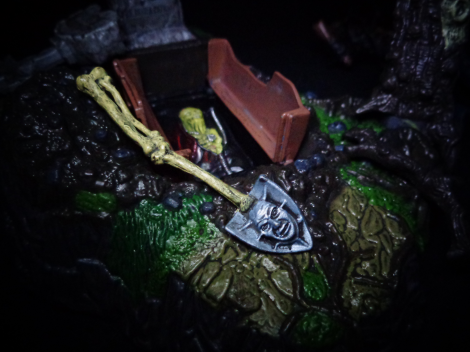 Aside from the two figures, the Graveyard comes with a tree, tree branch, broken half of Al’s tombstone, Al’s corpse, the demon shovel, a ram skull, and a knife. That’s a lot of swag! As I said before, the gnarled tree looks great, although it should have come with an extra branch – the one branch only really looks good in one of its two spots. The tree itself plugs into the corner of the Graveyard, and can tip over fairly easily. And I’ve also already mentioned the tombstone, which has some ivy crawling up the back.  The body’s paint is a little gloppy, but otherwise it’s great. It’s still half-inside its body bag, though Al’s dog tags are clearly visible. It’s also only half a corpse – the only things sculpted are what you see in front of you. It fits securely into the grave, and can come out pretty easily, too. It’s a nice little touch. The shovel was a pretty significant part of that scene, and although the movie made it into kind of a joke, it looks creepy here. Its handle is made of leg bones, and the face on the shovel was originally Clown’s, in an attempt to be sarcastic. Here, it looks more like some sort of lost soul. Either Spawn or Clown can hold the shovel just fine.

The ram skull and dagger came from the guest-starring Satanists. Remember them? They showed up, tried to perform a ritual, and then got scared away just as Clown said, “I hate Wiccan Satanists, don’t you?” They are missing (they were just teens, anyway), but they’ve left their stuff behind! The skull looks great, suitably creepy, and is sculpted all over. The dagger looks hilariously melodramatic and overdone, like something you’d buy from one of those stores that sells marijuana, ninja throwing stars, and packs of naked playing cards. Which is probably exactly what it is. It slips into a slot on the ram’s skull, matching how the satanists stabbed it as part of their ritual. Either figure can hold either part, too, so even though we don’t have the stupid kids, I like it. 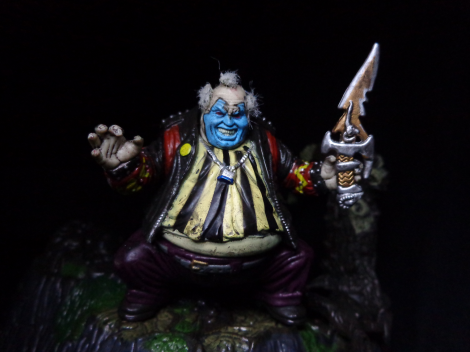 This set used to retail for $10, and it has maintained its value. $10. Shop around, and you won’t even have to worry too much about shipping! 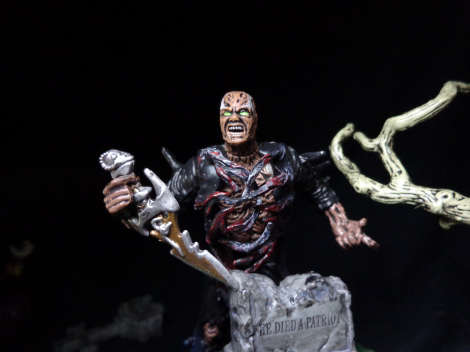 Clown’s Hair WILL fall off, so be ready to reglue it. Other than that, it seems fine. 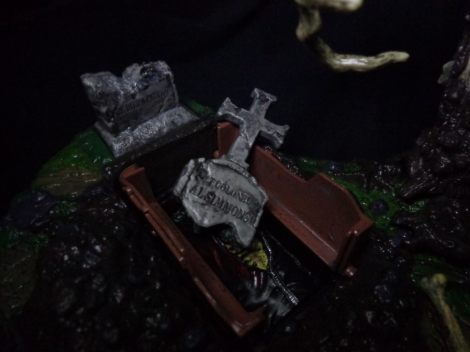 For a toy this old, you’ve got two choices – eBay, Amazon, or toy conventions/vintage toy sellers. I’d suggest the latter if you see them anywhere nearby, as they usually have better prices. But eBay shouldn’t sting too badly! 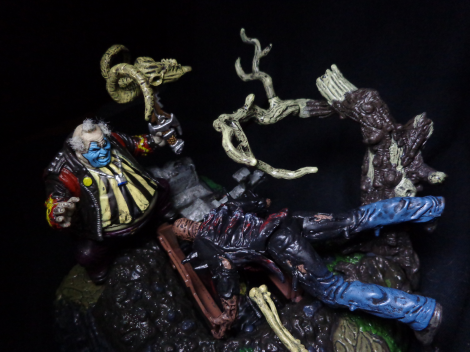 Despite its great action feature, figures, and accessories, the poor sculpting and scramped surface area (there is barely enough room for the figures to stand) keeps this playset from being perfect. It is really good, though, and it supplies a 3″-scale Spawn if you’ve got the Alley. Well, now there’s only one more movie set to go! 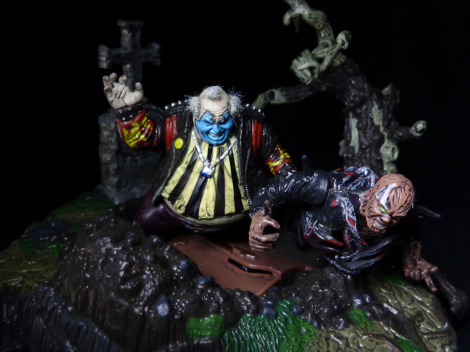