“BOOBS! Now that we got that out of the way, let’s move on with the review-did I mention bazoongas and tommyknockers and chesticles?!”

They say that art is subjective, and Vanillaware’s latest offering put that old adage to the test for sure. What one may see as vulgar and depraved and a simple parade of jiggling cha-chas instead of anything else could be seen as an art form by others. It’s a neverending dinglebobbers, I’m sorry, I mean debate on whether or not parading mammaries in a stylistic form could be seen as airbags, I mean, affront to the womenfolk, and whether or not we should speed-bump, I MEAN, stare at freshly inked titties, I MEAN ta-tas, I MEAN….

*sigh* Sorry folks, but I need to get this out of my system before we can move on, alright? Alright, then. Ahem!

BOOBS! Now that we got that out of the way, let’s move on with the review-did I mention bazoongas and tommyknockers and chesticles?!

That is one very happy skull!

It’s hard not to ignore the Mickeys-and-Minnies of the female characters of “Dragon’s Crown”, since they were so prominent you might think the game was all about the boobage and little else. Alas, mammary lovers, such is not the case, for this game is actually a tribute to the olden days of arcade beat-em-ups akin to Double Dragon or Final Fight, where the only objective is to walk right and beat the ever-living tar out of everything that comes your way with a healthy dose of the usual RPG trappings, such as a leveling and equipment system. It’s a simplistic formula that would’ve made for a boring game at the hands of your average developer, but then again, Vanillaware is no average game developer.

The plot, or what little is there, places you in the shoes of an adventurer arriving in the kingdom of Hydeland, hoping to make your fortune with your money-grubbing thief partner, Rannie the Rogue. Along the way, you discovered that the King of Hydeland went missing as he searched for the titular Dragon’s Crown, a legendary magical artifact capable of controlling dragons, and soon got dragged into a series of events that eventually will decide the fate of Hydeland if not the entire world. It’s the standard save-the-world, paper-thin RPG plot, but plot is not where this game shines. No, it’s the gameplay that really made this thing worth your precious gold. 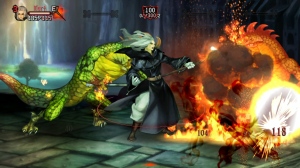 “Aah, I just love the smell of burnt lizardmen in the morning! Smells like victory!”

The game offers six different classes for the player to take on, with six different mechanics that allows for six very different experiences through the game. The Fighter, for example, is the most balanced class in the game with no glaring flaws whatsoever and thus best suited for beginners, whereas the Amazon is the “glass cannon” type with very high attack and agility at the cost of poor defenses suited for intermediate players favoring hit-and-away tactics. She is also one of the two “heavy-set” playable female characters in the game, so she might also be best suited for horny teenage males.

An interesting mechanic is how the game utilizes the right analog stick, where moving it would bring up a cursor to point and click at locked doors or treasure chests to allow you to snatch up whatever goodies tucked away inside. A little further into the game, however, you’ll be given command over runes and doing the same point-and-click method over a series of three specific runes, either via runic symbols etched on the stage’s backgrounds or the runestones in your inventory, will activate runic spells. These can range from as simple as activating a healing spell to opening hidden passages to causing instant deaths to everything that is not the player characters or stage bosses on screen, adding more depth to this simple button-masher affair. 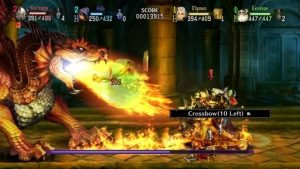 “Aah, I just love the smell of burnt humans in the morning! Smells like victory!”

The icing on the cake is, of course, the artwork of the game. Vanillaware in general, and George Kamitani in specific, has been known to be very artistic when it comes to the visual presentation of their games, and people need to honestly stop raging about the rampant boobies in this game like this is a first time event, because unlike your usual tits-and-ass parade of games like Grand Theft Auto, there is a purpose for such an exaggerated manner of presentation. When you take in all of the points of the visual design, monster boobies and hulking torsos and all, it only served to lend an even more fantastical nature to this strange new land we are traversing.

In short, if “The Rape of Europa” features a pair of full-on nipples and passes as art, there’s no reason why the wacky yet stylized anatomies of both male and female characters alike in this game can’t pass as one as well. 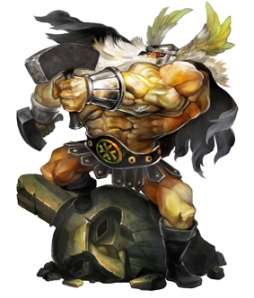 I’m more worried if the Dwarf wears anything under that skirt. THIS IS A MORE IMPORTANT ISSUE, PEOPLE!

And there are plenty more of good things to say about this game, be they good ideas or the incredibly artsy presentation or the fact that who could ever thought that a simple gameplay could be so much more engaging than most of the hoity-toity high-brow, convoluted pretentiousness that polluted most triple-A games today. Dragon’s Crown offers one of the best arguments of ‘video games are not movies and shouldn’t be treated like one’ around in modern times, something that is clearly unthinkable in this post Grand Theft Auto day-and-age. And yet none of that is going to matter.

Because everybody will be too busy raging about the boobies.

PROTIP: Just looking at this picture puts you in the FBI’s watchlist