JRPGs in recent years have gotten a seriously bad rep. In fact, no two-bit online videogame reviewer could ever hope to make it into the big leagues if they didn’t bash on a JRPG at least once in their Yahtzee-wannabe career. It’s the “kewl” thing to do in gaming these days, because the desire to fit in with the cool kids still rings true today the same way that we all dressed up like hobos after we saw Joey McIntyre introduced the “Hobo Chic” look and style.

Negativity for the genre is at an all-time high that most gamers will have a knee-jerk reaction to snark the moment they see the spindly-limbed, anime-styled drawings of the androgynous pretty-boy protagonist on the cover illustration for “Tales of Xilia”. For those people, I will say the same thing I said to Joey McIntyre the day we found out the reason why the coolest kid in school dressed like a homeless is because he IS homeless after the bank foreclosed his family home: 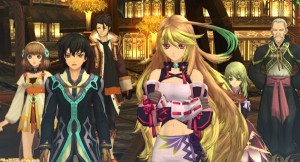 And JRPG fans now have the right to be indignant over insults for their beloved genre, for Tales of Xilia, true to form to its franchise obligations, continues the proud tradition of offering a top-notch gameplay that every other JRPG is envious to copy. For those who have been living under a rock sat upon by a sweaty naked fat man, Namco Bandai’s (nee Namco) “Tales of” series prides itself on its unique battle system that can be best described as a cross between a beat-em-up and a fighting game: players on the left, enemies to the right, bada bing bada boom, no more enemies, rinse and repeat. Along the way, 3D enters into the fray, but the basic combat remains the same with an added feature of “Free Run”, where at the touch of a button the players can leave the ‘rails’ that they and the enemy are stuck on and free runs (GET IT?!) all around the 3D arena.

All the better to murder people with!

New to Tales of Xilia, however, is the “Link Battle” system and the on-the-fly party change feature. A Link Battle is exactly what it says on the tin, where a character under the player’s control can link up with another active party member to form a tag-team combo against the enemy, giving the player an array of flanking strategies and unleashing a world of hurt against the poor sap with “Link Artes”, a super move-esque skill that can only be performed after the Link Gauge is completely filled by attacking like madmen after executing a Link Battle. On-the-fly party change is also exactly what it says on the tin, where the player can switch out a character mid-battle at the touch of a button, which is a very important strategy considering that each characters have a unique “Link Skill” that can be very effective in murdering certain, more stubborn types of enemies. 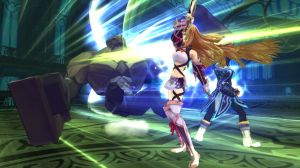 Tales of Xilia shines outside of battle too, for it offers plenty of good ideas. It’s almost shocking to see that none of these ideas were implemented in JRPGs before. Stores in towns, for example, no longer sell unique equipment that can only be obtained in that specific town, but instead upgrade their inventories based on the amount of raw materials the player donates through the “Expand” option. What this means is that it effectively eliminates the need to travel back and forth between towns to grab a specific piece of equipment, since all of those things will be available in any store you find anywhere in the game world. Not that travel is really a hassle anyway, since the game also added a fast-travel option to eliminate all the needless scouring just to get to the next plot location.

All in all, Tales of Xilia is a nice return to form for JRPGs to fix their tarnished rep in the West. Yep. That’s it. End of review. Go buy the game. See ya next week.

….-sigh- FINE! Fine! Time to serve up a good, healthy serving of snark.

No, jailbait loli girl, no it wouldn’t.

You’ll notice that I’ve avoided talking about the story of Tales of Xilia, and for good reason too: it is as trite and cliché as it can possibly get! It is cliché with a capital “C”, even! There is so little original idea in this one that if you were to put the plot side by side with the plot to “A Good Day to Die Hard”, the latter would win Best Original Screenplay!

So we have our young hero, Jude Mathis, doing what any self-respecting anime protagonist pretty boy does best: moping, when the ever-so-mysterious Milla enters his life. One unfortunate coincidence later, and Jude found himself on the run with the mysterious girl while trying to find his way back home, inexplicably dragging him into a sinister plot that grew with every step they take. Sounds familiar? It should.

Because that’s the exact same way “Tales of the Abyss” starts off with!

No joke: the unoriginality of the plot in this one is so staggering that you can tick them off with a timesheet and a number two pencil one by one as they appeared in order. Mysterious girl who methodically placed the main hero through all the stages of Joseph Campbell’s “Hero’s Journey”? Check! Calm and cool big brother-type who has his own agenda and not at all as he seems to be? Check! Underage Loli and/or Shota jailbait whose only purpose is to satisfy the deviant pervert quota? Check! Childhood friend who served as part of the arbitrary love triangle who would undoubtedly be friend-zoned in favor of the lead female for the love interest by the end of the game?

Well…you know, it’s actually nice to see that they didn’t have that-

Of course, when we talk about bad voice acting, we can’t always put the blaming finger on bad voice actors all the time, because sometimes it can also be traced to bad voice directors as well. However, this one features vocal tracks so wooden and off-timing enough to make one wonder if the actors hired for this gig are first timer rookies. The beacon of hope here is the fact that there ARE big name VAs involved in this project, such as Liam O’Brien, a.k.a. the voice that made Tokugawa Ieyasu from “Sengoku Basara 3” so charming and charismatic leader-like, heard here playing the role of…some two bit villainous bodyguard of the Main Big Bad.

Okay, so it’s not as much a beacon of hope as it is a tiny-ass nightlight placed on top of a dead lighthouse and hoping it will help ships at night avoid crashing. And you can add “miscasting” to the list of growing complaints as well.

But you know something?

I don’t give a fuck.

I don’t care if the story is shite. I don’t care if the cutesy antics of the lesser female characters makes me puke. I don’t care if Milla has a lisp, which is pretty prevalent throughout her dialogues. Because when all of the bad is weighed in against the good, this game is well-rounded and generally, well, charming. Tales of Xilia is, indeed, charming with all of its flaws and will come to grow on you given time. And you will be spending plenty of time with this game trying to forgive all of its flaws, because the good is simply too good to make any RPG fan, JRPG or otherwise, to pass up on Tales of Xilia. Even Milla’s lisp will become charming given time, since the concept is, after all, pretty novel: who have ever heard of a literal Goddess with a lisp before? Certainly not I, sir! 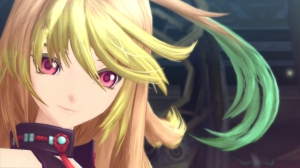 And certainly not with a ridiculous green cowlick like THAT!

All in all, Tales of Xilia is a game that will find its home in the hearts of fans of JRPG everywhere. And for those who refuse to simply play it on the the fact that it is a JRPG, I will do the same thing I did when we all went to Joey McIntyre’s former home to see him and his family off. I will nod at you, smile, and despite of our differences, I will wave goodbye and see you off in search of a better game.

And then I will turn around and drop my undies and wave my “twin moons of Endor” at you.

VERDICT: Four out of Five Strands of Ridiculous Hair-Do

One response to “Late to the Game: Tales of Xilia”