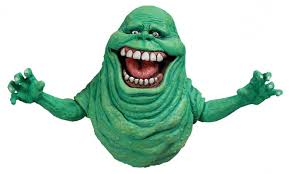 Well, this is a cheat. You see, a few years ago, I wrote this abomination as a crackfic. I literally forgot about it, until a few months ago, when it gained some “fame” due to Cracked.com. So, I figured, why not run it on FFF. Unfortunately, since it is my own creation, I’m not certain I would maintain any amount of humor in my commentary. So there won’t be any. This is the fic, run in its entirety, without my commentary. Enjoy.

A NEW SHADE OF GREEN

It had been almost a year since Sam had joined the Ghostbusters. He had only been learning then. But it still made him shudder to think about it. To be honest, he had never thought it was even possible until it happened. Love was a strange thing.

His first night on response with the rest of the gang. It had been a few years since the Auto-bot fiasco, and he craved more in his crappy existence. His girlfriend had left him, his car had left him. All he had left was his penthouse apartment and his trust fund.

So, he had joined the Ghostbusters. His first night on response. Slimer had gotten loose. He had gone back to that fancy hotel downtown. The Ghostbusters figured it would be a good initiation run. Let him show his worth. Bah.

When he found Slimer, (and boy did he ever) he had his ghostly cock out. He was pissing on the room service! That bastard! Sam then poised his Ray-Gun and shot. All he did was fall backwards. He was pathetic.

He heard Slimer laugh at him. That green little bastard. Slimer floated over to him, glided down. It was then that Sam noticed how big Slimer’s cock was. It had to be at least 3 feet long! Christ, and that was soft!

Slimer then started dragging him. To where he did not know.

Within a few minutes they had reached their destination. It turned out to be an old supply closet that wasn’t used. Sam thought he saw some blood on the floor. Is this where Slimer’s body had died?

Then he felt something. Soft moving. Maybe a mouse? No. It was… under him. And on top of him? It was then that Sam realized what was happening.

Slimer was taking off his pants! Was… was Slimer going to rape him?

He tried screaming. Pleading Screamer not to do this. But in the end, it mattered not. Slimer was going to rape him.

By the time Sam had stopped screaming, Slimer had Sam’s underwear and shirt off as well. Sam’s cock was involuntarily hard. Slimer was jerking him off. It left a trail of slime on his cock. Slimer… it almost felt good. An involuntary moan slipped out of Sam.

The moan did not go unnoticed by Slimer either. He sped up his jerking, Sam now moaning near nonstop. He thrusting his hips in the air, begging Slimer not to stop. He was reaching his climax, shouting “BUMBLEBEE!” into the air.

Then Slimer stopped. Sam groaned, looking up to see Slimer hit him. It really hurt. Slimer rolled him over, pulling Sam’s ass into the air. Slimer stuck his finger into Sam’s rectum. He was spread slime in there, using it as lube. At the same time, this act stretched him. Got him ready.

Slimer’s now 4 foot hard cock stretched into Sam’s anus. Moving his bowles, insides, everything. Sam hurt. He had never been fucked before, and with such a cock, he knew he should be dead. He didn’t care either.

It felt horrible, but… good. It… it was amazing. Slimer didn’t need lube, for obvious reasons.

Slimer was now moving, pushing organs around as he moved. He started slow. It was excruciating. Sam wanted him to go so much faster. He vocalized his wish with a long, drawn out moan.

Slimer refused. To Slimer, this squishy meat bag was just a moving fleshlight. No need to care for his wants, his desires. Only Slimers.

Slimer felt the need to go faster soon, however. He eased himself in and out at a more rapid pace. He had needed this for SO long.

Sam was moaning, probably so loud that the people in the lobby could hear. They were several floors down, too!

Back at Ghostbusters HQ

Janet was at her desk nude, filing her nails. Then, this strange woman came in. She had on… 80’s clothes. Short skirt, tube top. Janet noticed that the woman had particularly large breasts. Probably D cups.

The woman started to undress in the lobby. Janet was mesmerized by this stranger’s beuty. Janet was, in fact, a lesbian. She now craved this woman.

Janet, however, knew that she should stop this. When the woman was down to just her panties, Janet got up. However, the woman pushed her down.

The woman lifted Janet’s legs and started to lap at her pussy. It was the best cunninglingus the woman had performed all day.

Janet let out a moan. Her pussy hadn’t gotten this much attention in years.

Then the Ghostbuster Steve walked in. Steve was the Ghostbuster’s accountant. What they didn’t know, however, was that Steve was actually named Logan. He preferred Wolverine, however. He pulled out his cock, moaned, and started stroking. The girls payed no heed.

The woman then got up, walked over and crouched over Janet’s head, and concentrated.

After a few moments, a few pieces of shit started to fall onto Janet’s head. She didn’t know what to do. This was a new one for her. She had never even heard of people eating shit before. She open her mouth to say something, but a piece fell into her mouth.

As it turned out, it didn’t taste ‘bad’, per se. To be honest, it tasted like… pizza hut. But Janet had gone to Medical School.

She knew the diseases you could get. So, she spit it out.

But the woman looked so saddened. She… Janet couldn’t stand it. She ate all of the shit, then kissed the woman. The woman tasted… has she done this before today? Maybe Janet just had an after taste, but the woman tasted like crap as well. But… different shit.

Then Steve came over and said that he was going to fuck my ass. I… I’ve never had my ass fucked…

Back at the Hotel

It had been an hour. A full hour of Slimer fucking! Sam didn’t even hurt anymore. He had even came several times. He wondered what was keeping him alive, he should be dead after all.

He then felt Slimer pull out. He wondered what was going on.

His asshole ached from two things. Over use, and the lack of giant cock it was now used to.

He looked behind him to see that Slimer now looked like he was dieing. No, morphing. Growing. Changing.

He was changing form.

Steve had started fucking her ass. It hurt, but it helped that the woman was now fucking her pussy with a strap-on she had gotten from her car. She had also revealed her name. “Jean Grey”, she had said. Whoever that was.

Her and the woman kissed. Then Steve came.

He… he howled. Then… then he grew… metal claws. He stabbed her. Then Jean… put her hand to her head. They were then floating.

Logan then started to shit.

Slimer had morphed. Into a… a giant dick. He was green. But what fatty figure he had was now gone. In it’s place was a form of… cock.

He was just a six foot long cock. Which was now fucking Sam. Sam was going to die. He now knew where the blood came from. It was Slimer’s last victim. There was fresh blood now, though. His blood.

Soon Slimer was going to just off him. He wished it would happen soon. If he had to come again, he was afraid his balls would go through his dick.

Slimer, however, knew exactly what would happen. He was just waiting for it.

Steve had been shiting for minutes on end. His asshole burned. He didn’t know how this was possible. The entire room had been filled with shit. Anymore…

Anymore and they would suffocate. They would die. None of them wanted to die…

Slimer had grown. Sam’s asshole was now as large as his head. He had now felt like a dick for telling his mother’s sister to “get over it” during childbirth.

Sam reached for his phone, held six, and waited…

Logan had filled the whole firestation with shit. All three had died from suffocation. No one ever find there bodies…

Sam finally came again. After another hour. He was right. His balls did go through his dick. They were now discarded somewhere. He had no idea how it happened. He didn’t want to either.

Then they heard bangs.

A group of purple helicopter’s shot off a large amount of explosive amunition. All they had. They saint’s got a call telling them to destroy this hotel. So, they did. They wanted to blow something up anyway, and with the Ronin, Samedi, and Brotherhood gone they had nothing. It was a mutually beneficial agreement.

Everyone in New York was obliterated that day. No survivors.

Everyone in Stillwater was obliterated that day. No survivors.