“…as unsexy as a fat man in a banana hammock.”

Mecha is the easiest sales formula ever for any video games. Adding a gigantic mechanical monstrosity to any game is like adding Sriracha to any type of cooking: it instantly makes whatever it was you’re serving up that much more enjoyable. Basically, you just can’t go wrong with mecha, which made the fact that From Software botched it up with “Armored Core V” all the more baffling. 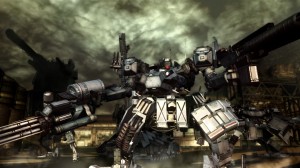 “WHAT did you say, muthafucka?!”

That sound you just heard is a million Armored Core fanboys warming up their USG-23/H Gatling guns for that previous comment, so allow myself to set-up the erasure disclaimer that usually comes up during this kind of potential rage-bait. Ahem! I was a fan of the Armored Core series ever since the game starts out on the Playstation One (then just “Playstation”), and I have been loyal to the brand with every passing generation. I even tolerated the more dubious titles in the series, such as “Armored Core: Nine Breaker”, and while good ol’ number five did not come close to being worse than THAT particular pile of steaming horse excrement, there are times where the quality dipped to a near nosedive to that particular level. 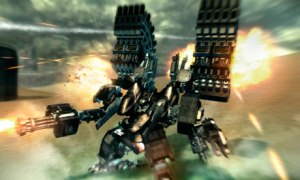 Pictured: the response to THAT game

Let’s start with the visual aspect: while the stages and mission areas are leaps and bounds to the bland, plastic-y feel of the backgrounds for “Armored Core: For Answer”, the designs of the titular Armored Cores, or “ACs” for short, are clearly anything but. Gone are the striking visual designs of the NEXT mechas in AC4 and For Answer, and in their place are these short, stocky, dwarf-sized machines looking as unsexy as a fat man in a banana hammock. Realistic-looking war-machines are all well and good, but sometimes you just want to drive around in a Wing Gundam, and this game just failed to realize that aesthetics is half of the draw of a mecha game. 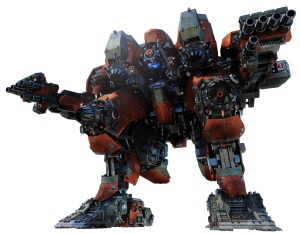 By this game’s standards, this is Venus de Milo

If griping about how unpretty the machines are seems shallow to you, then perhaps we should move on to -oh no, wait, did I mention the game effectively FORCES you to look ugly? Yes, there are parts that gave you some semblance of an aesthetically pleasing AC design, but Gundam helps you if you actually tried to launch in one of these for you’ll be shot to scrap before you could say, “Hyper Beam Cannon”. The parts that are most beneficial, and thus ensures your survival better, seems to be the ones that looks like it was beaten by the ugly stick one too many times. For all of its promises of a freedom in customization, From Software seems to contradict itself and forces you to look like a Bayformers reject to fully enjoy this game. 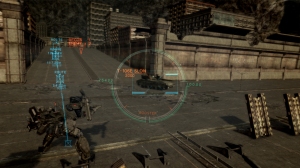 But those aren’t even ACV’s biggest offense, no, the BIGGEST offense of this game is how much it tries to forces online multiplayer on an unsuspecting pilot. Each mission of this game is divided into difficulty levels, and from Difficulty Level 6 and upwards the game ramps it up in a not-so-subtle attempt to push the player to go online. Some good examples are side-missions that instructed you to defeat a team of two ACs that complements each other’s strengths, and despite of your best effort to fine tune your AC to perfection, these two would proceed to make sweet, sweet non-consensual robot sex on your hapless machine should you decide to take them on solo. They will mop the floor with your robot face if you take them on by yourself is what I’m saying, and that is not good game design. 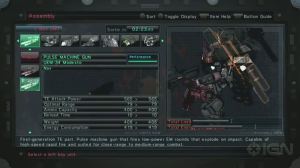 I’m going to stroke Ben “Yahtzee” Crosshaw’s ego and quote him on “putting single player and multiplayer in the same basket”, in that the “multiplayer just gets in the way of the story and playing single player just makes you feel like you’re missing out on something.” ACV sacrifices a whole lot of chunk of narratives and exposition in favor of more multiplayer-geared content, and not once does the game felt engaging from a plot aspect. Expect tons of moments where you will be lost on what’s going on on-screen and constantly wondering why everybody is yelling during the single-player campaign. 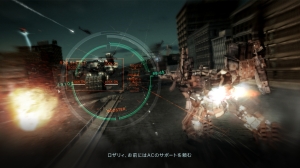 All in all, Armored Core V is not a bad game, it’s just a multiplayer game that tried to pass itself as a single-player game and failed gloriously. That’s not a bad thing if you’re into multiplayer games and have both a stable connection and a ready list of friends to play with you online, since this game (or so I’m told) is one of the better titles for online play there is out there. Then again, if I have real friends, I wouldn’t be playing video games, now wouldn’t I?

…wow, that kinda got dark at the end there, huh?

Yahtzee’s quote, and more of his shenanigans, can be found at http://www.escapistmagazine.com/articles/view/columns/extra-punctuation/9035-Mixing-Single-and-Multiplayer.2#Mj1rqSq2vf6HEDw2.99

9 responses to “Late to the Game: Armored Core V”