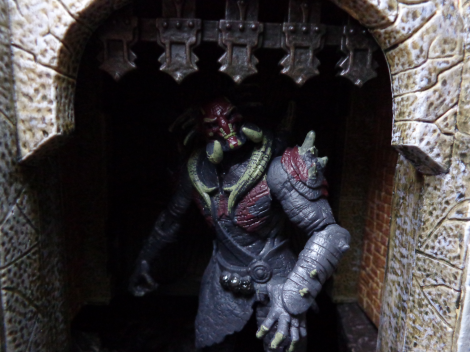 Thor: The Dark World has sneaked up on me. Really, I totally forgot it was coming out! So hey, Thor fights Dark Elves – not D&D Drow, but things based a little more on the original Norse dark elves. That’s about all I know at the moment. Jane Foster may or may not be in danger. I know how it sounds, but I am looking forward to this movie… I just have no spoilers. Oh hey, the toys are already here! I wasn’t able to find the Dark Elf soldiers, and I only snagged one of the Thor variants and Kurse.

Kurse in the comics is an Asgardian trapped in a suit of armor, filled with rage and revenge fantasies against Thor.  He received his armor from The Beyonder, and is trapped in it – it also is garish yellow and gold, and pretty comic-booky.  Kurse in the movie?

“This menacing villain serves the evil Malekith. He’s been transformed from his normal form into a sinister, even more powerful creature with one thing in mind: wreaking havoc on the realm of Asgaard!”

I think that means he’s an elf. I have no idea if Kurse will be a major part of the movie, or a one-scene henchman, or anything else, but he looked cool, so I grabbed one, too.

It’s servicable! The blister is pretty typical for marvel movie figures, and even resembles the Thor 1 toy packaging… which might be a problem, because those toys just didn’t sell. I might be a little cynical about these ones.

There are better Thor toys in the first movie line. This one isn’t bad, it’s just not good. Thor is wearing what I assume is some sort of formal outfit, because his cape doesn’t look too battle-convenient. Don’t get me wrong, it’s cool, and capes that cover somebody’s arm are always awesome, especially if they conceal a cyborg drill-arm or a chain whip or a sword or a cyborg drill arm with a chain whip and sword! But they don’t. And Thor’s armor, while pretty detailed, extends long enough over his hips to impede his leg movement, his arms have funky-weird musculature, and his face is really soft, smooth, and poorly-detailed. You can tell that he’s Thor… or Triple H, maybe. He looks fine from a distance, but is pretty underwhelming in person.

Kurse is another story. Some other reviewers have labelled him as looking like one of Peter Jackson’s orcs, which is good enough that I might stick him in with the Hobbit figures! It’s hard to tell whether he wears armor or if he has a thorny hide (it’s armor), but his leathery, plated, spiky texture blends together pretty well. The mask also looks good, though I suspect its details are kind of soft, too. Kurse’s skirt does impede his leg movement some, though, which is unfortunate. Also, note those grenades on his belt. They actually have a purpose!

It just might be that Thor’s face is not smooth and under-detailed. It could be that the paint simply glops off all the sculptural details. On paper, his paint is fine – the color scheme is prety eye-catching – but it’s really the bare minimum on his armor, his face is sloppy, and it’s just pretty boring overall. This toy just squeaked by on the bare minimum. 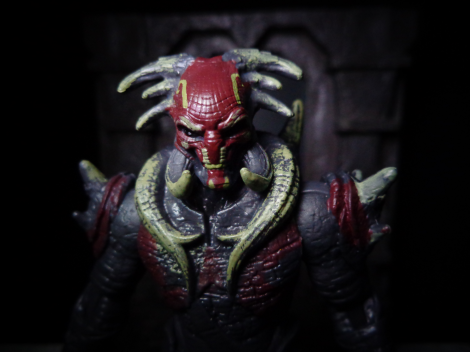 Kurse is certainly better-detailed than Thor, but this might just be due to the nature of his armor. It’s kind of a cheat when a character is pretty mono-colored, and when you look closely you will be amazed at the slop. Nothing on Kurse is cleanly-applied aside from a couple of details on his face. I think the effect works well, but it’s probably not very good in a technical sense.

These days, Hasbro has been chopping down its articulation in this scale so much that I was amazed to see these figures come with more than five points of articulation each. Thor comes with a ball-jointed head, ball-and-socket shoulders, elbows, hips, and ankles, double-hinged knees, and swivel wrists. This sounds great on paper, but in practice it’s lacking.

Thor’s boots hinder the knees enough that the double joints don’t seem to matter, his head might as well be a removable swivel because of his hair, and his elbows are just weird. They do not look natural in any pose aside from standing neutrally, so what do we do? And besides, his armor infringes on his leg and shoulder movement, though at least he can sit down.

Kurse technically fares worse in the articulation department, but he feels better somehow. He has a ball-jointed neck, and ball-and-socket shoulders, elbows, hips, and knees. No wrists, ankles, extra knee joints, or anything like that, so he’s kind of stiff. His sculpt only infringes on his hips, although you will have to be a little creative to pose him well. He needs wrists because of his accessory, but that’s another story entirely.

His articulation is less than Thor’s in literally every category, although overall he seems more flexible even though he can’t sit down properly.

Thor comes with two accessories: His cape and his hammer. The cape is removable if you pop off his head, and I have no complaints. The hammer is just as awesome as it should be, and I can’t think of anythign else Thor could come with – maybe a helmet? Honestly, it’s good

Kurse comes with a tiny grenade, matching the ones on his belt. It is so small that I guarantee children will lose all of theirs. Always. It has some texturing, and fits securely in his right hand, but that’s about it. Now, do you know what else Kurse could have come with? More grenades, in case you lose one! It’s so tiny that I feel something is lacking. Also, his lack of wrist articulation means that he can’t really hold, wield, or throw it in a pose that feels natural. 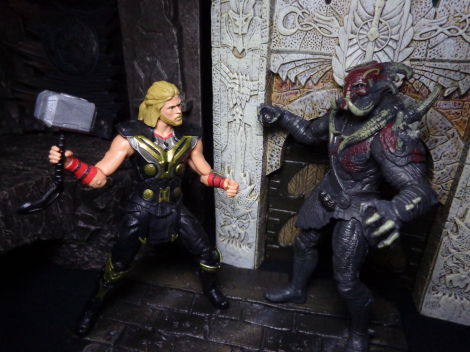 Eh. I can’t say I agree with $10 for a 4″ figure, but everybody raised their prices at once, so it’s the new standard. Price-fixing monopolists! Viva la Revolucion!

Paint. Paint, paint, paint. Compare until you find the cleanest. Also, do whatever it takes to not lose Kurse’s grenade. 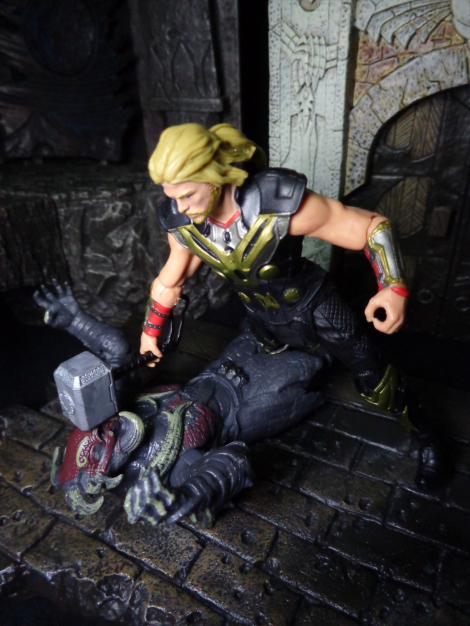 Anywhere. Toys R Us, Wal-Mart, Target… these toys are bleeding into stores now, where they will likely sit for the next year and a half. 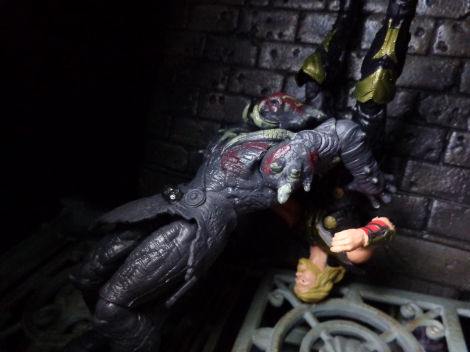 Eh. Kurse is kind of cool, and Thor has a nice cape, but I have seen better. The first Thor movie had better figures of the hero, too. If you like how Kurse looks, then go for him, because he’s not bad – what you see is what you get – but Thor himself is pretty disappointing. I’m sure the movie will be really good, though, so there’s that!