Welcome to Comic Book Storytelling.  I know it has been absent for a while now but we are back to bring you more comic book goodness and also badness as the case tends to be.  This time we will be looking at the first two issues of the DC Universe vs Master of the Universe mini series. 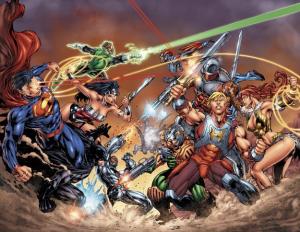 So it turns out Skeletor is not only on Earth but in the DC Universe.  And so is He-Man’s mom.  He-Man’s mom meets up with Madame Xanadu and John Constantine looking for help to fight Skeletor.  Meanwhile He-Man and the masters are still fighting the horde but then team up with Evil-Lyn to hunt down Skeletor.  And on Earth Skeletor has teamed up with Black Alice.  As with all cross over team up books the two groups of heroes eventually fight and that is already happening in Issue #2.  However instead of it being the usual stupid misunderstanding the Justice League is actually being mind controlled by Skeletor.

This series is not as terrible as the ongoing He-Man series but it is not that good either.  So far this mini series is kind of mediocre.  The only thing it has going for is that it has given Skeletor a much more menacing look than usual.  The only thing I have really gotten out of it so far is a new reason to hate the New 52.

I know a lot of people already hate the New 52.  There are a few things I hate about it myself and a lot of things I feel ambivalent about.  The new thing I hate is Black Alice or at least what DC has done with her in the New 52 which is to say made her evil.  Black Alice is not the most well known character but I am a fan of her.  I liked Black Alice when she was first introduced and looked forward to seeing more of her.  But then she got bounced around different titles because DC did not know what to do with her, by the way they should have just had her join the Shadowpact team from the start.  And now here she is in the New 52 reduced to a female version of Clarion the witch boy.  On that alone I refuse to read this title anymore.

4 responses to “Comic Book Storytelling: DC Universe vs Master of the Universe”