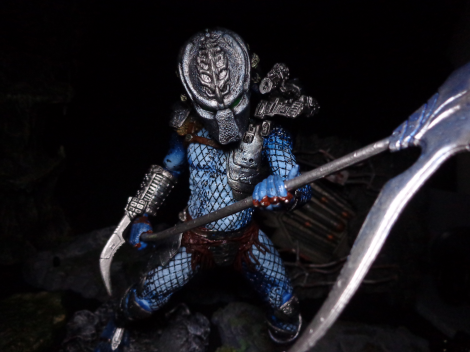 Hey, it’s those Predators I’ve been going nuts about all year long!

Back in the mid-’90s, Kenner Toys created an Aliens toy line, which was awesome and served as my introduction to “there are better toys out there than Ninja Turtles.” It later expanded to include Predators, and went from awesome to super-awesome.

Really late in the line’s life, it got rechristened “Hive Wars,” and saw a few new Aliens, Predators and Space Marines added to the lineup. One of those Predators was labelled “Warrior.” The Warrior was fairly standard Predator, albeit blue-skinned, and armed with a bladed staff. His mask had sort of a Klingon forehead ridge thing going on, which was something they added to a lot of Predator figures. Because we already had a blue-skinned Predator named Warrior in a past series (one of the Lost Tribe from Predator 2), NECA renamed this guy Hive Wars Predator, and gave him a distinct bio from the previous Warrior:

Stranded for years on Xenomorph Prime, his tribe was killed in a reckless Xeno hunt gone awry. Left with nothing but a broken ship and limited supplies, this Predator has proven to be very resourceful, crafting new weapons from the wreckage of his vessel. He lives in isolation, an outcast among the enemy, often becoming the hunted himself. He once longed for rescue from this desolate planet, but has since realized that this is the greatest challenge a true warrior could ever hope for. 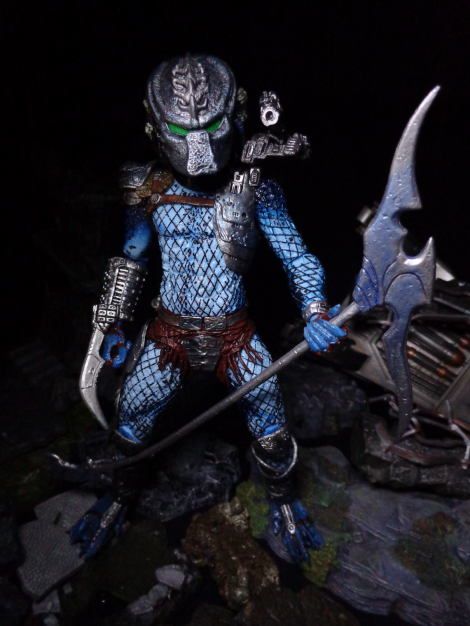 Look ma, no typos! Aside from that, this bio went in a direction I did not expect. I assumed that Hive Wars would be a specialized anti-Xeno warrior, but instead he is the ultimate survivor. I choose to interpret what happened to his clan as the ship crashing, leaving him stranded and fighting for his life. As for his weapons, now that I know they were salvaged, that scythe-thing makes a lot more sense. I will get into that later. Uniquely among the three, I do not own the original Kenner Hive Wars Predator. It runs for about $50 on eBay right now, and I just can’t bring myself to fork over the cash for it yet. But enough of that, let’s look at this figure!

BAHAHAHAHA! I am sorry, I know that writing “Bahaha” is not professional, but I love what they did here. The blister pack is designed to look just like the original Kenner packaging – it’s got the old-fashioned mask, pixellated explosion, and even that green grid pattern on the back! All three figures also come with their own concept artwork, which I would love to see on its own sometime. Also, this is the only one without a typo in the bio. Cherish it.

NECA Predators all use a few basic bodies. Hive Wars uses the Jungle Hunter body from the first Predator movie. This is very similar to the City Hunter body from the second movie, but differs in a lot of ways. The proportions are slightly different (the Jungle Hunter’s torso is rounder), his body has slightly different armor (of the permanently-affixed pieces, not the glued-on ones that get swapped out from sculpt to sculpt), and there are a few other differences if you look really closely.

Aside from the parts he shares with the basic Jungle Hunter body, Hive Wars has a new head, left arm, right forearm, right shoulder pad, the back of his loincloth, and his shins. The left arm seems to be the first “bare” arm in this toy line – no shoulder armor, and no gauntlet! Because of this, there is a hole in his chest plate where a wire would have connected it with a shoulder pad, but this isn’t a flaw – remember how Hive Wars has been stranded on a hostile planet for years? He probably used to have that wire, but has since lost it. The rest of his armor seems to lack battle damage, partly because of the re-used parts, and partly because it matches the original Kenner figure. 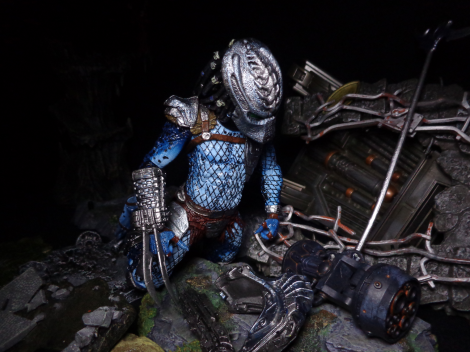 His head is the biggest new part, with a design mostly evocative of a standard Predator bio-mask, but adding that Klingon ridge I mentioned before. The mask is not removable, so we can’t see what he looks like underneath – which is a pity, as I would love to see a blue-skinned Predator unmasked (wait until Friday). Its surface is rough, scarred, and pitted, showing off some of the harshness of this character’s recent life. None of the dents or dings are large or prominent, though the whole surface has that weathered feeling. 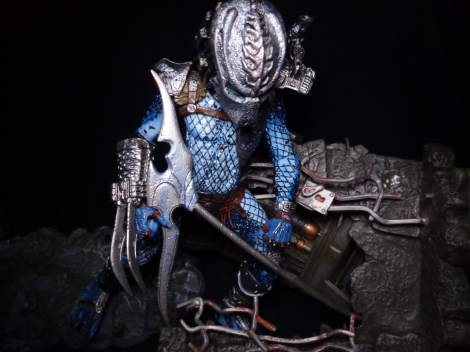 The gauntlet on Hive Wars’s right wrist is also new, and is a lot thicker and blockier than most Predator gauntlets. The blades are also huge, and do not extend or retract – if I had to venture a guess, I would say that they are fixed in place because he fashioned them from pieces of his ship. They are textured with little panels and seams, but otherwise there isn’t anything to support or deny this. Still, the claws are big and tough, and sturdy enough to safely hold the weight of an action figure of similar size to Hive Wars, so they are quite good. His new shin guards also seem strapped together, or perhaps they are merely a new style. It could easily be either.

Hive Wars’s skin is vibrant blue, so bright that it makes the Warrior Predator look dull, but not so bright that it feels “unrealistic.” His coloration ranges from deep indigo to pale sky blue on his chest, and several shades in between. I am disappointed that we can’t see how it looks on his face, but that was my same complaint about the Warrior, and it isn’t worth any upsetness. The paint on his body is absolutely fantastic, though with one exception – Hive Wars’s netting is a little sloppy. It is always sloppy with NECA’s Predators, as the template apparently can’t land those lines squarely where they are sculpted. It is really only apparent on close inspection, though, and all of his other details – like the spots on his chest – are exactly where they need to be. His armor is mostly metal, and shares a slightly blue tint along with the silver.

The Jungle Hunter loincloth does not interfere with his legs at all, and Hive Wars can take a surprising variety of poses – more than is usual for this body, since h lacks that constricting wire on his left arm. Considering his weapon and the way he needs to hold it, he probably could have done well with bicep swivels, but Predators have not had those yet. 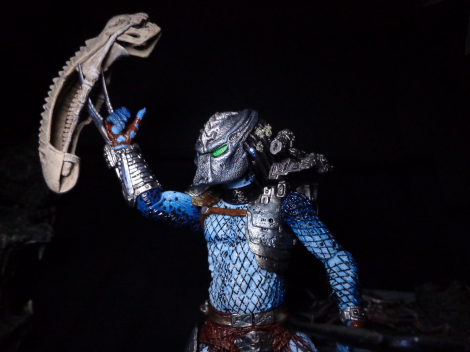 The original Hive Wars Predator came with a mask and scythe weapon. The new one comes with a removable plasma caster and scythe. His plasma caster is exactly the same as the standard Jungle Hunter’s – it plugs into his shoulder the same way, has the same articulation, and also has a tiny wire sticking out the back.

The scythe is interesting – much like the original, it seems to be one curved and carved piece of mono-colored metal. At first glance, this thing looks cheap – it’s thin the handle is curved, and it seems cobbled together. But when you think about it, that’s the point! Hive Wars made this weapon from his wrecked ship, and it isn’t perfect. It is more visibly scarred and pitted than anything else on his person, though, so he clearly gets a lot of use out of it. The scythe fits securely in either of his hands, but looks best when brandished in both.

This figure should run you about $20-ish, give or take a little depending on where you find it. That’s the exact industry standard these days, and a lot cheaper than Mattel would charge for the same thing.

Nothing is particularly fragile on Hive Wars, except for that tiny wire on the back of his plasma caster. Even his wrist claws feel sturdy, so he is one of the more durable Predators in this toy line.

These guys should start showing up any day now at Toys R Us, but for now you can check plenty of on-line dealers, such as Big Bad Toy Store, where I preordered mine.

I’ve been really excited about these toys since the New York Toy Fair waaaaaaay back at the beginning of the year, and I am not disappointed! I admit that when I first saw Series 10 announced, Hive Wars got the least attention. It’s true, I have no nostalgia for the original figure, but this toy stands very well on its own two feet in spite of that.

It looks great, the colors are striking, his new parts look very good, his weapon is surprisingly well-executed, and he’s a survivor. Will he be rescued eventually, and thus get to share his exploits as a hunter? Nobody knows!

Check back on Friday for Nightstorm Predator, the headliner of Series 10!