Forgetting that second “L” can lead to some…interesting situations.

“Somewhere inside this extremely well-polished pirate adventure is an Assassin’s Creed game.”

October and November has been quite the busy months for new releases. Lord knows we here at Nerditis’ game desk have an outstanding backlog of unopened games, and the recent addition of new releases is certainly not helping. One of those games is “Assassin’s Creed: Black Flag”, the latest entry to the Assassin’s Creed series and-what’s that? ‘Shouldn’t we be reviewing Pokemon X/Y?’, you say? 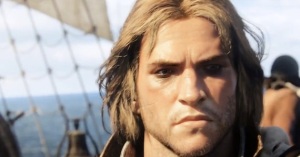 There is absolutely nothing to say about the Pokemon games! NOTHING! Nothing that haven’t been said ten thousand times before! Reviewing a Pokemon game now is like doing research on how far can a penguin shoot its poop (answer: 40 cm) or determining whether lap dancers can earn higher tips when they are ovulating: fascinating, but any results you get proved beyond a doubt that YOU, sir, are a HORRIBLE person!

We won’t do it! And you can’t make us! So THERE! NYEAAAAAAAH!!

Phew! Sorry about that! It’s just that if we hear one more ‘PLZ DO A PKMON RVEW K THNX BAI’, we SWEAR we are going to kick a puppy! So please don’t make us kick a puppy, m’kaay? M’kaay.

Back to topic: AssCred Black Flag (don’t forget that second “L”!) tells the story of Edward Kenway, father of Haytham Kenway and grandfather of Ratonhnhaké:ton a.k.a. Connor Kenway, two of the protagonists and major characters of Assassin’s Creed III. But nothing you’ve just read up to now held any relevance whatsoever to the plot of the game. In fact, it’s questionable if the concept of ‘storyline’ even held ANY relevance whatsoever this time around, since the game seems to give zero fucks about telling an engaging one, if at all. Because, really, what is there TO tell?

We can talk about how Edward is a flawed man who is seeking his fortune in the Caribbeans in order to redeem himself to his estranged wife, but there’s not much in redemption when he’s actually enjoying acting like a Majestic Doucheticles for 85% of the game. It’s not until near the end of the game that Ubisoft pulled an eleventh-hour redemption plot out of their collective asses in an attempt to make us like this ‘hero’ more, but by then it was already too late. Because as of that moment, Edward Kenway has officially replaced Connor as the most annoying protagonist in the Assassin’s Creed series to date.

We’d ask how that made him feel, but we really couldn’t give a fuck right now.

How about if we switch to present day and check in with Desmond Miles and the rest of the Scooby Gang? Nope, no such luck, because the game confirmed he was deader than a doorknob. You, the player, instead take on the ever so exciting role of…a nameless office worker. A nameless office worker in an Abstergo gaming division company who is tasked with diving into Desmond’s collected gene samples in order to gain more footage about his stabby ancestors.

Woo hoo. I got a nosebleed I’m having so much fun.

…that was sarcasm, by the way.

“They’ll, they’ll bring me back in some way for the sequels, right? Right?! Guys?!”

So if plot is not the strongest suite of AssCred: Ebony Banner, then what IS? The answer is, of course, the gameplay and the game world itself. The Carribeans have never looked so gorgeous, and sailing across the open seas with your mateys singing sea-shanties (that’s ‘songs you sing together while sailing’ to you landlubbers) is the closest you are going to get to feeling like witty Captain Jack Sparrow without actually playing those GOD-AWFUL, so-called “official” Pirates of the Carribean games. You can even acquire treasure maps from corpses and scour the Carribean for hidden treasures, but that’s not why you’re here, was it?

No: you’re here for the ship-to-ship combat. 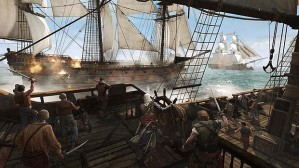 That sound you just heard is your inner eight-year-old squealing with joy!

Well, we’re happy to report that the ship-to-ship combat was simply positively epic: disable your enemies’ ships with cannon fires and mortars, and once you’ve downed enough masts, dock onto them by swinging on ropes before proceeding to raid their decks with hand-to-hand combat. And yes, you can even try to recreate that scene from “Pirates of the Carribean: At World’s End”, where the two captains dueled to the death while their two ships are stuck together in a storm while slowly being sucked into a gigantic whirlpool. “Epic” is the name of the game here, and Ubisoft certainly pulled all the stops to deliver a genuine marauding buccaneer experience.

And therein lies the rub: somewhere inside this extremely well-polished pirate adventure is an Assassin’s Creed game.

This screenshot was taken precisely one second before Edward unleashed the Kyubi and activated the Sharingan.

The thing about combining two things that taste great is that sometimes you ended up with something that tasted confusing, if not terrible. Let’s call this the “Fruitcake Fallacy”, where “fruit” is “good” and “cake” is “great” and whereas “fruitcake” is “nasty crap”. It’s all too easy to imagine that in their quest to top Part Trois, somebody at the development team  stumbled upon the “Pirates vs Ninjas” debate over at 4Chan, made the ill-advised decision to stood up, and shouted, “That’s it! That’s what our next Assassin’s Creed game is all about: Ninja Pirates!”, and his boss, clearly overworked and underpaid, wiped off the cocaine off his nose before proclaiming, “BRILLIANT! GIVE THIS MAN A RAISE!!” 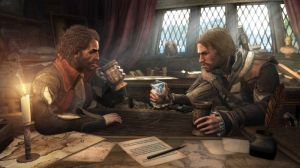 “I hope you don’t mind if I pay your salary in Cosmic Cubes.”

Fruitcake Fallacy reared its ugly head everywhere in this game. From how imbalanced a mob-battle was when compared with a one-on-one duel in terms of difficulty, to how much the game undermines the land exploration and tailing missions in favor of open-sea combat and exploration, everything tasted confusing. The game is very wishy-washy when deciding if it wanted to be a stealth-action game or a simple action game with pirate undertones that warrants an epic, large scale battle, and in the end its the players who have to pay the price.

Overall, however, the game is as good as an Assassin’s Creed game could get. It did plenty of things right as well as wrong, and this adventure at the open seas deserved the full price admission. So remember, mateys: this is one plunder you’ll want to get legally!

“I DIDN’T PIRATE IT!! IT WAS A LEGAL BACKUP COPY!”

VERDICT: Three out of Five Black Fa-Er, We Mean, Flags

6 responses to “Late to the Game: Assassin’s Creed – Black Flag”