At least, I THINK that reads as “Shut Up and Give Us Your Money”

“Yakuza: Ishin”, or roughly translated as “Yakuza: Restoration”, recently got a more detailed playthrough video with game producer Masayoshi Yokoyama and designer Shinnosuke Hirasawa, as well as a couple of pixies that I have no idea what their business being there, so I’m just going to assume that they’re eye candy. The video reveals several things, such as the battle system, Soul Orb leveling system, the weapon crafting mechanics, special moves learning system, and more. Check it!

There are plenty of cool ideas here, like the Soul Orb system that reminded me a lot of Final Fantasy X’s Sphere System where leveling up earns you orbs to spend on a character’s growth palette at your own leisure. Added bonus includes the White Soul Orb, that when installed to a skill slot allows you to ‘try out’ the skill before deciding whether or not you’d like to ‘buy’ it for real. But that’s not the coolest part of it all.

No, the real cool part is when Kazuma, our sword-slinging hero, PULLS OUT A GODDAMN CANNON OUT OF HIS GODDAMN PANTS TO BLAST AS MANY FOOLS AS HE CAN!! 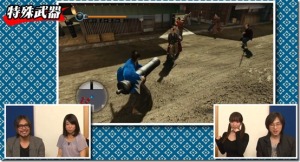