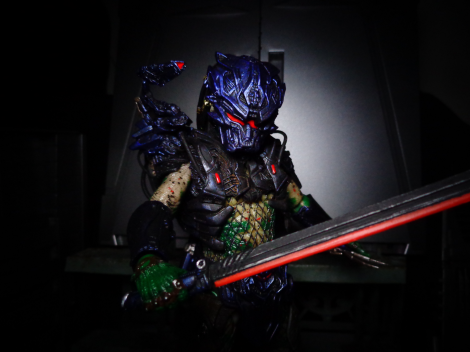 We’re really down the rabbit hole with this one, folks.

The original Lost Predator (aka “Borg”) was one of the random Preds seen at the end of Predator 2 – he’s the green one. Aside from his skin color, Lost stood out among the clan because of his armor – he had a unique technological/cyborg getup that was completely different from anything any other Predator has worn before or since. That is because Stan Winston re-used the armor pieces from an obscure movie he worked on titled The Vindicator (or Robo-Man, or Frankenstein ’88). Predators Series 11 is a “Concept Wave,” like Series 10 (the Kenner wave), or the inclusion of Big Red in Series 7. And for this, the folks at NECA chose to take Lost and update him to his logical extent. 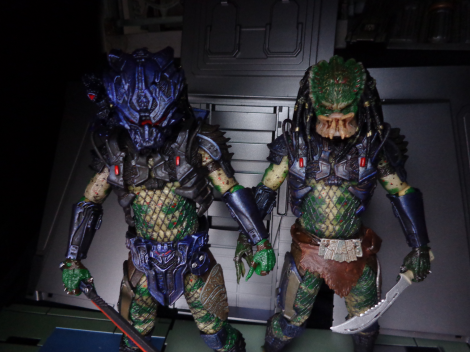 There are a few theories about Lost’s armor – some saying that he was injured and on a respirator, others claiming that it’s tracking/recording equipment. But based on the available evidence now (read: his name), Lost’s gear is less for the hut and more for an actual, pitched battle. This Predator is ready for war.

When Hot Toys released a figure of this character, they gave hi a bio-mask reused from Guardian/Gort Predator. Instead of following that lead, NECA has given him a brand-new technologically-styled mask fitting his armor style. They have also updated his loincloth and sword, given him a plasma caster (he used to lack one thanks to the Vindicator armor not having a cannon), and have included a nice little preview for the upcoming Alien Vs. Predator figures (scheduled for Series 13). So, let’s take a look! 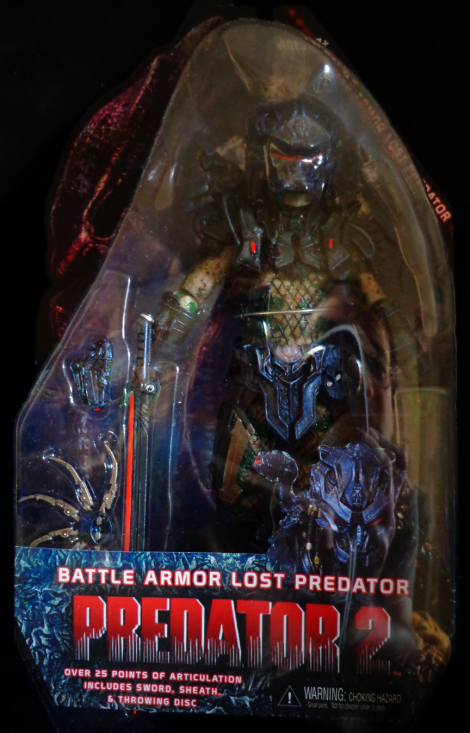 Battle Armor Lost’s packaging is the same as pretty much anybody’s in this line. And just as I have said on many occasions, it is worth four stars – but I have to take a tiny issue with one thing. The bio on the back is the same generic description of the Predator 2 clan that all of the other figures got, even though this would have been a fantastic opportunity to explain a little more about his gear and purpose. Although the speculation is fun, it would have been nice to see a little more information.

Battle Armor Lost shares a lot with his original counterpart, having been built from the basic City Hunter body. The new parts are his head, upper body armor (sort of), loincloth, and the new sheathe for his sword.

The upper body armor is built from Lost’s original, with one addition – he now has a plasma caster attached to his right shoulder. Notably, this is the first time that a Predator’s cannon has attached thee instead of on the left (Wolf doesn’t count, he was dual-wielding), and the rig is permanently affixed, not removable. The gun itself is on two ball joints, and can either aim in any direction, or fold back in for a convincing “rest” position. It is fantastic, and the attachment is pretty seamless.

Lost’s old loincloth was a short leather skirt with a tiny belt. The new one matches his mask and armor, although its shape still calls to mind the Predator’s basic tribal motif. That’s something I really like about this – yes, he has exposed wires and circuits and lights and things like that, but the general shapes and patterns used still call back to other Predators, and look like they fit in with the series as a whole. His armor may be unique, but he does not stick out unnecessarily. The sheathe for his sword attaches to the back of his belt propped up on a metallic spinal cord. It looks great, though the scabbard might interfere with his backpack a little bit based on his pose. Also, as an aside, you can see where he hangs his spare shurikens.

Of course, the big draw is Lost’s new mask. His head sculpt channels Predator, Robocop, and even a little bit of Cylon. What I said about the loincloth applies here – Lost’s mask is fantastic! The “expression (read; perceived anthropomorphism) actually changes a little based on the angle, much like a Japanese Hannya mask. In fact, if you view hi from above and to the side, his visor almost looks like two eyes! The mask is also slightly asymmetrical, with a missing panel on the left side of his respirator. Battle damage? Intentional design? Up for interpretation!

The original Lost Predator was one of the best-painted toys of 2012. The new one lacks the old figure’s face sculpt (and thus paint), but the re-used body parts are actually a little bit better than the original thanks to some cleaner application on the netting.

His armor is just as blue and metallic as before, with clean red apps for the lights and visor. His chest armor is a little dingier, but the effect isn’t always noticeable. His accessories are also painted, and match up nicely with his gear.

Battle Armor Lost Predator has typical Predator articulation – a ball-jointed head, hands, and feet, ball-and-socket shoulders, elbows, and hips, double-hinged knees, swivel waist, and two ball joints for his plasma caster. His new loincloth is slightly less restrictive than the original, but that said, Lost has one flaw shared with his older version. 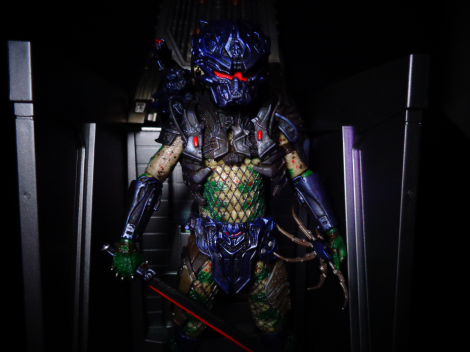 Lost’s forearm gauntlets have some exposed wiring that interferes with his elbow articulation. The only way that NECA could have solved this would have been to rotate the gauntlets, but they chose not to do so. As a result, it is very hard to bend his arms – they will nearly always be held straight out. This really interfered with any swordfighting or shuriken-throwing poses you might want to put him into, and it is frustrating. It is quite survivable, though, and I really enjoyed the original Lost as well, elbows notwithstanding. 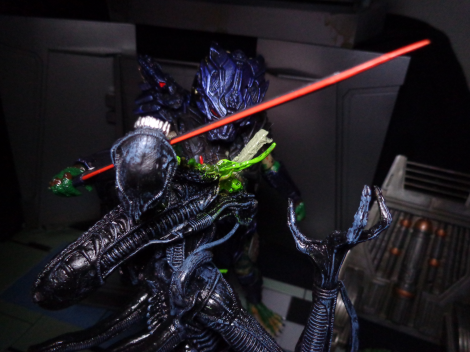 Battle Armor Lost Predator comes with two accessories for sure, with an “optional” third. He has his brand-new sword, his shuriken, and his plasma caster. The cannon is packaged separately from his backpack, and can probably be held in his hand if you want to go all Wolf Predator on us.

The original version of Lost came with a simple machete, holstered at his hip. Battle Armor Lost comes with an Odachi, albeit a techno-themed one. The sword is massive, longer than his torso, and just as the original Japanese swords were meant to cut down cavalry, I am willing to wager that his is designed for bigger, tougher prey than those encountered by most Predators. The blade seems oddly thick, and the edge is red – is it lit up? Laser-edged? Vibro-edged? There is clearly something going on with that weapon, but it is left up for interpretation. The sword fits cleanly in either hand, though it seems to go better in his right. It also slides into its scabbard without a hitch. 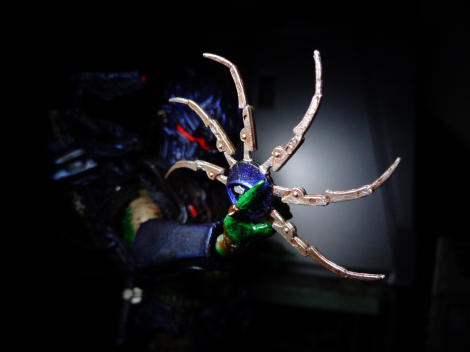 Lost’s Shuriken is an awesome bonus – a little preview for the upcoming Alien Vs. Predator figures! If you remember, the Preds in that movie used a fancy-schmancy six-bladed throwing star-thingy instead of their traditional razor discs. And Battle Armor Lost has one! The sculpt is ornate and delicate, but looks pretty vicious. It fits into both of his hands, though you want to position it just right to get him holding it correctly. Remember, the blades should curve forward (even though in real life, you’d throw it the other way), and he grasps it between his thumb and forefinger. Think of it as something he will use as a melee weapon before throwing. The item is roughly the same size as the shurikens that came with McFarlane’s AvP Preds, only the blades are narrower. It also has a paint app, with a blue metallic body that matches his armor.

At roughly $20, you are paying a good price. Yeah, I wish that toys were cheaper, but this is pretty inexpensive for an 8″ figure with this much detail.

Be careful not to damage or lose the shuriken, and watch out for those wires on Lost’s plasma caster backpack. Other than that, he seems pretty durable to me.

Battle Armor Lost should be at all the usual places – Toys R Us, Amazon, and eBay. Keep in mind that TRU will be doing their post-Christmas restock right about now, so he should turn up sooner or later.

The newest “Concept” Predator is an update of a canonical movie character, but it does not feel cheap! You really get the impression that when Predators need to go on the battlefield, this is the guy they would turn to. The new pieces are great, his accessories are awesome, and the only flaw is one shared with the original version. This opens up the doorway for more “updates” like this one. What about Shaman? or the blue Warrior? I’d love to see some more movie Predators in different situations now. Thanks!