You know, toy makers mean well. They want to release product that sells. Often, they are staffed by collector and fan-types who want to put out quality product that sells. But sometimes, things get in the way. Egos refuse to deflate. Committees miscommunicate. Fans who like one particular thing cannot fathom that other fans might differ. And so, you get poor toymaking decisions. But then, every so often, this goes a little step further, and we end up with sheer, mind-numbing insanity! Just WHAT were they thinking?

2013 was an excellent year for toys. After the industry had faltered for a few years in a row, 2013 came by with more high-quality product and fan service than anyone had dreamed, but it also carried its share of insane craziness. So let’s have a look at some of it, shall we?
The Spirit of Hordak 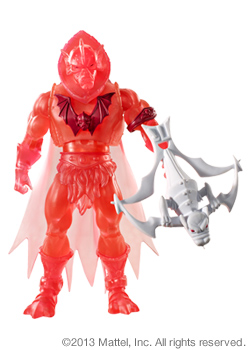 This year, Matty decided to offer a figure – this Hordak repaint – in random, unannounced “secret” chase sales throughout the year. He might go on sale for an hour this Thursday! Or maybe at midnight on Saturday! Or maybe next month! They did this because, clearly, that would definitely feed into the goodwill of fans.

It was a massacre.

On the surface, this one looks great! And in fact, even though the toy came out early in 2013 and is now almost a year old, I will probably get around to reviewing it.

NECA admitted that their Prometheus line did not sell well enough to meet expectations. From all appearances, certain figures such as the Fligh Suit Engineer (aka the Space Jockey from Alien) or the Deacon seemed to sell well, but often we hardcore collectors can be myopic. Honestly, I can’t help but think that this one set of two figures contributed majorly to the line’s failure. It contained the post-crash injured Engineer from the film’s climax, as well as the “Trilobite.” You know, the gigantic proto-Face Hugger. That sounds cool, right? Well, keep in mind that Face Huggers are essentially alien rape metaphors. And now think about the giant proboscis that the Trilobite shoved down the Engineer’s throat. You know, the phallic appendage that sprouted from its underbelly, surrounded by vagina-shaped mouths and eyes.

Also, this was a Toys R Us exclusive.

So hey, kids! Let’s go to Toys R Us and buy the rapesquid! Complete with detatchable, bendy penis! Yaaaaaaay!

My local Toys R Us still has a massive stack of unsold figures, and the staff even jokes about them from time to time. The unfortunate implications of this set did not escape anybody. They are currently discounted.

But the good news is, at least TRU had the foresight to place the “Toys R Us Exclusive” sticker so it covers up the giant rubber penis!

World War Z was a very successful novel. And the movie, starring Brad Pitt, was poised to rake in fistfuls of cash. Jazwares managed to score the rights to make the toys – and come on, with celebrities and zombies galore, how could anything go wrong?

They forgot to secure Brad Pitt’s likeness. This is supposed to be his character. 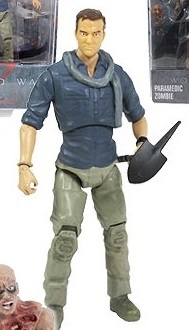 I reviewed these guys. Twice. I was not a fan. Now, I came under some flak on-line for posting such a negative review. And you know, sure, opinions may vary. I like a lot of stuff that is objectively crap (Yay, Unimax Dino Warriors!), but my main beef with the Battle Beasts was the horrendous quality control. Limbs would fall off and not come back on, be too loose to hold a pose, or too tight to move without breaking. Most of the figures couldn’t even carry their own weight without drooping and falling over. And it was this way with every figure I had – what, twelve of them? The general internet response was that yes, MiniMates have this problem, but fans are willing to overlook that. Okay, I can understand that. Lots of toys have quality control issues. But then, see, on one of the forums, an actual representative from Diamond Select posted a defense. And very kindly, he gave advice on how to fix loose joints with superglue (use it to create an extra layer and tighten the joints). Thanks! But then he went one step further. And forgive me for not giving a direct quote, I seriously can’t find the forum post and have to work from memory.

He said that the QC issues were a good thing because having to fix your toys before playing with them was just like toy customization, and thus it increased the play value. 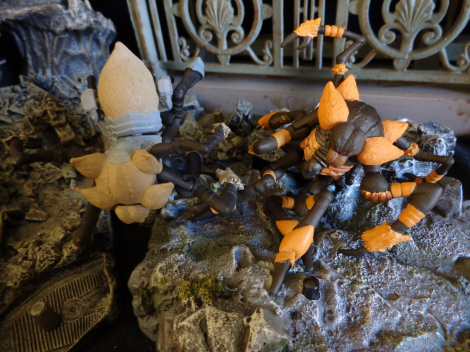 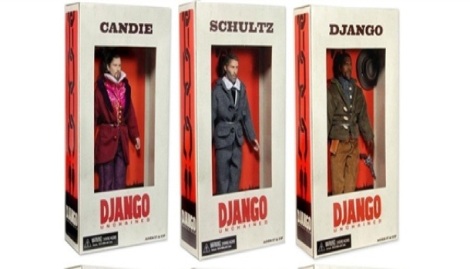 NECA, I love you. In my not-so-humble opinion, you were the best company of 201. But you know, some ideas just don’t work out. Django Unchained is a Quentin Tarantino movie about a freed slave who shoots people and saves his wife, and people are still debating whether it is racist or empowering. NECA secured the license to release Django toys, which should have been no problem – hey, it couldnt be as bad as the rapesquid, right? Well, instead of making their usual 7″-ish tall adult-themed action figures, they made Django dolls in the same style of the old MEGOs. I think this may have been Mr. Tarantino’s idea, but I am honestly not sure.

And so, because they looked like dressed-up Barbies, a bunch of militant activist groups got a hold of some and became more than a little angry that you could buy your very own Southern Slave Trader Doll and play dress-up with Barbie. The hoopla hit national news, people went insane, and the dolls were pulled from the shelves. Any Django figures on the market now sell for huge amounts of money.

And you know, I kind of think that it could have been avoided if only they didn’t resemble big, friendly dolls.

Breaking Bad was an awesome show. It wasn’t religious by any means, but it was like they made an entire TV series based on Mark 8:36:

“For what does it profit a man to gain the whole world, but lose his soul?” (answer: A crap-ton of money, lots of dead friends and relatives, and a bullet in the lung)

Near the end of this powerful narrative, Mezco released a line of Breaking Bad figures. Okay, they had zero articulation, and were essentially statues. We collectors can live with that. It’s a major wasted opportunity, but worse things could happen.

Oh, wait. These were in Toys R Us. Bags of blue meth and all. Remember the Rapesquid? I got to listen to TRU employees complain about how they had to put these right next to child-aimed toys for a whole month. I think they sold, but… yeah, guys. Meth on Aisle 7, next to the Skylanders! 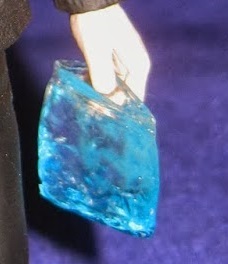 For previous Marvel movies, Hasbro did a bang-up job with the toys. They released all the major characters alongside genuinely interesting variants (remember the armors from Iron Man 2? Man, I love those). Now, the Thor figures were not exactly great sellers, and not every Iron Man 2 variant was a success. So, in response, Hasbro released pared-down toy lines for both of its Marvel Movies in 2013. In and of itself, this is fine. The only problem?

Thor: The Dark World had Kurse and a Dark Elf, but no Malekith – the main bad guy was just absent. Iron Man 3 fared worse by not including faux-Mandarin or Evil Glowy Guy Pierce. Instead, you got a couple of armor variants that were not even the most recognizable ones in the movie, and then the line just sort of called it quits. Who is Tony going to fight now?

Incomplete toy lines happen. It’s a fact of life. But for both movie lines to have the exact same gap – a gap that, if filled, would have sold out immediately – is just insane.

The toy arket is getting difficult. Sales are down, production costs are up, and companies have to cut costs. Often, they streamline their product lines, but Mattel and Hasbro apparently both felt the burn a little more than usual. This is why they chopped many of their toy lines down to the bare minimum of articulation and detailing, and started selling them for more than before. You know, I am fine with ministatue figures. But if a toy swivels only at the shoulders and hips, and has ramrod-straight limbs… it is wasted. He cannot step, sit, or kick, and he certainly can’t punch or wield anything. The articulation is utterly useless at that point, and it seems that lots of people agree if you want to judge based on the overstocked shelves.
So, overall, was 2013 a good year or a bad year for toys? Honestly – and as you will see with the Golden Germs – I think it was a great year. Nor am I claiming that toys need always be child-friendly. But sometimes it pays to pay attention to your audience. Remember, people are people wherever you go, and sometimes crazy happens.