Well, will you look at that? There IS some justice in this world after all! King.com, a.k.a. Public Enemy Number 1, has recently withdrawn their trademark application for the word “Candy”. 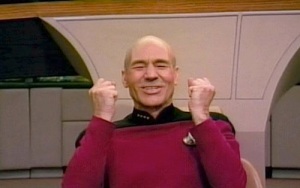 Picture is very much related.

Gee, I wonder WHY you would do something like that, King? Was it the negative publicity? Was it the pressure from your future stockholders? Was it because it’s so goddamn stupid that you deserve all the mockery in the world due to you? Or was it the fact you so blatantly stole the idea for Candy Crush Saga and THEN have the audacity to whine and grind about copycats stealing your so-called hard-earned dollars from you?

Such a mystery how this all affair pans out, doesn’t it?

“In case you can’t tell, that was sarcasm, by the way.”

6 responses to “The King Is Dead. Long Live The King!”