Namco Bandai recently confirmed that Jojo’s Bizarre Adventure All Star Battle is coming to both the EU and Australia in April 25th, 2014, with an American release curiously set in “Spring 2014”. Strange how the EU and Australia got release dates earlier than the U.S. when in most cases it is the exact opposite. I wonder if it’s because one of the main characters dress like Liberace’s gayer cousin? 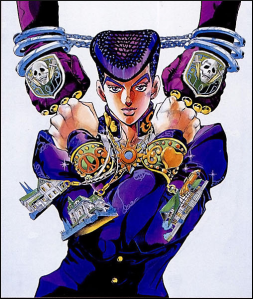 Naaaah. Couldn’t be. Not in America, right?

Regardless of how you feel about Fabulous Boy up there, the game is certainly something that is worth looking forward to. Even if you are not a fan of fighting games, you’ll still want to play it. Why?

BECAUSE IT HAS TWO PEOPLE FIGHTING ON HORSES, WHO ARE ALSO FIGHTING EACH OTHER!!