NBC’s Hannibal is the most brutal show about friendship on television right now, maybe ever.  A lot of things happened on last nights episode but it was all really a set up for Will Graham and Hannibal Lecter to begin playing a long game against each other. 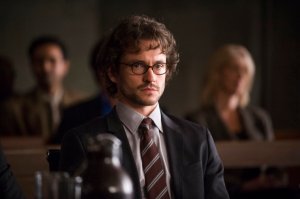 Will’s trial began and pretty much everyone’s plans for it got derailed in some way or another.  The FBI wanted a quick trial with a guilty verdict so they could finally sweep the embarrassment of the situation under the rug.  Jack Crawford took a big step to undermining that plan by publicly blaming himself for Will’s mental breakdown.  But the prosecution still has people like Freddy Lounds and Dr Chilton to claim that Will is evil.  Freddy Lounds and Dr Chilton are the worst, but they are interesting characters and I kind of love how the show is building on these two supporting characters from the books.  But they are also still the worst.

During the trial a brand new murder happens that mimics all of the other murders that Will is being blamed for.  Is Hannibal Lecter responsible?  Or course he is, unless the show is messing with us.  Anyway Will and his lawyer decide to take a risk and change their defense strategy by arguing that this murder can prove that Will is innocent.  And they call Hannibal Lecter to the stand to help them make that argument. 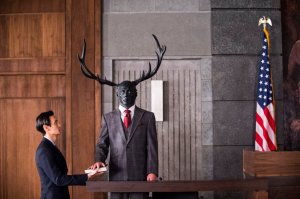 It looks like Hannibal committed this murder to help Will’s defense because he wants his buddy back.  But the judge rejects it and gets his brain and heart removed for it.  As I said before this is all about Hannibal and Will playing the long game.  Hannibal has created a new murderer for the FBI to hunt with the long term goal of getting Will set free and keeping his own true nature a secret.  Will is playing along with this with the long term goal of proving his innocence and exposing Hannibal.  Since the show is planning to eventually tackle the stories of the books you can guess how this will eventually turn out but damn is it going to be enjoyable to watch them get there.