Last night Hannibal did not waste any time showing the audience the final fate of Beverly Katz and it may have been the most gruesome thing the show has ever done.

When we last saw Beverly she was in Hannibal Lecter’s basement shooting at him.  It turns out she did not walk away from the encounter.  The episode opens with reporter Freddy Lounds responding to an anonymous tip and discovering Beverly’s remains but the show does not let us see her just yet.  It is not until Jack Crawford arrives that the audience gets a good look at Beverly’s gruesome fate.  Beverly has been vertically sliced into a set of anatomical display cases.  It was horrific and more than once there were shots that lingered on it as if the show were rubbing our faces in the fact that Beverly is gone and she is not coming back except in Will Graham’s mindscape.  Will is allowed to visit the crime scene and is deeply disturbed that Beverly died helping him.  So much so that he begins to consider other options when dealing with Hannibal. 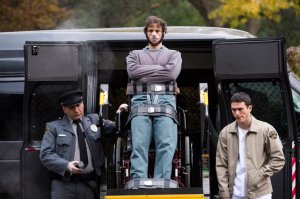 It is sad that Beverly is gone but it was just a matter of time before something like this happened to turn the tides in new directions for everyone.  It is possible that Beverly’s invasion of his home has Hannibal rethinking his friendship with Will.  In fact early on it looks like Hannibal may be trading Will in exchange for Jack.  Hannibal could just cut his losses but at this point he has developed a taste for friendship and is not ready to give it up.

In other events it turns out that Abel Gideon, played by Eddie Izzard, is still alive.  I just assumed he was dead when Will shot him last season but nope he is still here.  Dr. Chilton brings him back to meet with Will in an attempt to uncover if Hannibal is really a serial killer or not.  Chilton and Lecter seem to be in awkward sort of standoff with each other, they have both done things wrong but can not call each other out on it.  But if Chilton can prove that Hannibal is a killer then whatever dirt he has on him would be moot.  Anyway Abel Gideon plants the idea that the only way Will can win against Hannibal is to kill him.

So Will agrees to meet with reporter of questionable ethics Freddy Lounds.  He enlists her aid in making contact with the copycat killer admirer from his trial a few weeks ago in exchange for exclusive rights to his story when all of this is over.  The plan works and the copycat turns out to be an orderly at the mental hospital.  He admits to killing the bailiff in order to give Will an alibi but the judge it seems was Hannibal’s work.  By the end of their talk Will takes a step to the dark side and asks his admirer to kill Hannibal Lecter.

The orderly manages to get the drop on Hannibal at the pool and strings him up.  At this point he knows that Hannibal is the real killer but still goes ahead with the hanging and torment in order to prove his own superiority.  Lucky for Hannibal Alana Bloom figured out what Will was up to and she and Jack arrive just in time to save him.

If Hannibal was not already having seconds thoughts about his friendship with Will Graham he probably is now.