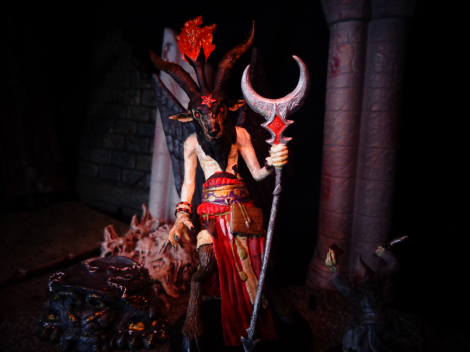 What do you think of when you hear “Baphomet?” Do you think of ancient conspiracies? The occult? The Freemasons? The Illuminati? That hermaphrodite goat with a pentagram? witches and black sabbaths? Ancient Babylonian religions? Secret teachings of the Knights Templar?

Nope. Turns out it’s all a fraud. There is no Baphomet.

Firstly, goat imagery has shown up in many religions and cultures, and is often unrelated – from Herodotus mentioning Greek goat-gods to the Egyptian Banebdjedet, to more modern things, they are not necessarily related. Attempting to draw one unbroken line of conspiracies because a really common animal pops up as a motif really does not work. It would be like trying to claim that every rain/thunder god is the same. Most of the supposed links between them were made up from whole cloth in the 1800s. But aside from that, what is the origin of the name/demon/deity “Baphomet?”

The name first showed up in earnest in the 13th century, as part of a bunch of accusations against the Knights Templar. For some background, the Knights Templar ran afoul of the main Catholic church because A: they failed in retaking the Holy Land, and B: they ran a lot of banking and finance. If you haven’t learned this from Jewish history, the people who run the banks tend to get killed often. So there was the accusation that the Templars worshiped the pagan god “Baphomet,” often with their Catholic reliquaries claimed to be idols. In tracing back the history of the term, the very first mention of Baphomet that anybody has ever found was in an 11th-century French language accusation against the Knights Templar, from when the major persecution was just beginning. When translated, it says, “As the next day dawned, they[Templars] called loudly upon Baphomet; and we prayed silently in our hearts to God, then we attacked and forced all of them outside the city walls.”

This doesn’t say much, does it? Actually, it really helps, because surrounding literature can provide context. The Knights Templar had been accused of incorporating Islamic beliefs into their religion, though this was a fraud – the western European concept of Islam at the time was far different than the real thing. They thought, for example, that the god of the Muslims was Muhammad.

The generally-accepted spelling for Muhammad at the time (and for centuries afterward) was Mahomet.

The French statement was an accusation that the Templars were worshipping Mahomet, only they misspelled it into Baphomet.

Baphomet is a typo.

From there, it just sort of picked up steam as a nebulous pagan god that the Knights Templar were accused of worshiping – generally with no goat imagery or even anything more satanic than, “All pagan gods are devils.”

In the 19th century, Eliphas Levi combined a lot of occultic goat imagery, including some ancient goats, the Sabbath sacrificial goats, the Goat of Mendes, Pan, The Green Man, Banebdjedet, and a particular nature deity worshiped in witchcraft that resembled a goat with a third, burning horn. He drew the hermaphrodite Sabbatic goat that is now famous today, and called it Baphomet, and claimed that it had always been worshiped, and pretty much made it the embodiment of the pentagram. In fact, this was the first time that the pentagram went from “random occult symbol” to “the sign of all that is Satan.” Levi also supposedly based the goat sketch on a gargoyle he saw.

Aleistar Crowley took this and ran with it, declaring Baphomet to be his god and the “Mystery of Mysteries.” And from there it just sort of spread into public consciousness as having always been the identity of any goat demon or god or belief that has ever existed.

Baphomet’s identification with Freemasonry is due to the accusations of a man named Leo Taxil, who also claimed that Albert Pike (the man who made Freemasonry religious) called Satan God. However, Taxil was a liar, and even admitted as much before a public audience – he made up stories about the Masons to drive the Catholics into a furor so he could embarrass them later. The religious aspects of Freemasonry are sort of a Hindu-flavored Unitarianism, anyway. But the damage was done, and this only pushed Baphomet more into the public consciousness as a major occult figure.

So, there you have it. One misspelled name, a bunch of overzealous Catholics, and a couple of lying occultists. And that’s where Baphomet came from! A TYPO.

First mention of Baphomet – 1098 letter by Anselm of Ribemont.

Partner, Peter (1987). The Knights Templar and Their Myth.

Barber, Malcolm (1994). The New Knighthood: A History of the Order of the Temple.

Barber, Malcolm; Bate, Keith (2010). Letters from the East: Crusaders, Pilgrims and Settlers in the 12th-13th Centuries.

Wright, Thomas (1865). “The Worship of the Generative Powers During the Middle Ages of Western Europe”.

Why Figure Photos of the Day?

3 responses to “Figure Photo of the Day: Baphomet”