Or rather it ends with Hannibal covered in everybody elses blood, and a bit of his own blood.

This season of Hannibal opened with a flash forward of Jack Crawford walking into Hannibal’s kitchen and pulling a gun on him only to have Hannibal Lecter throw a knife and disarm him.  What followed was a rather amazing fight where we saw Mads Mikkelsen and Laurence Fishburne beat the hell out of each other.  On the season finale the show finally caught up with that event.

The episode begins with the shows various protagonists having conversations about the plan to bring Hannibal Lecter to justice.  Will is going to trick Hannibal into trying to kill Jack and no one is sure if any of them are going to walk away from this scheme alive.  In other conversation Hannibal has a talk with Jack’s wife, who is now bedridden due to her cancer, about forgiveness.  Hannibal robbed Mrs. Crawford of the end she wanted but she says forgiveness is not something you choose, it is something that just happens or it does not. 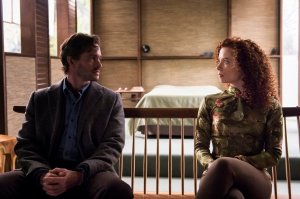 Will talks to Freddy Lounds at one point and this is where the grand scheme to catch Dr. Lecter begins to unravel.  Not long after Will is helping Hannibal prepare for their escape after they kill Jack.  Hannibal smells the scent of Freddy Lounds and begins to see the trap Will is setting for him.  But Hannibal is not ready to give up on their friendship yet and they have a dinner table game of who is going to blink first.  Hannibal offers Will the chance to run away with him now and just leave Jack and everything else behind.  Will sticks to his narrative that Jack must die.  Neither of them blink so to speak. 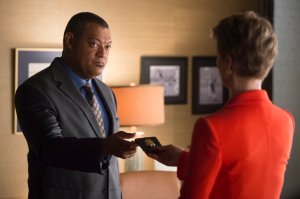 The next speed bump in the scheme comes from that one FBI lady who I guess is Jack’s boss, we have not seen her since Will’s trial earlier this season.  Somehow she has learned about what Will and Jack are doing and does not approve.  It is unclear how she found out.  Did Hannibal tip her off somehow?  She makes Jack turn over his badge and issues arrest warrants for him and Will.  It turns out pretending to be a serial killer and mutilating corpses is not something the FBI can legally sanction.  Alana Bloom pleads with FBI boss lady to let the plot go forward but she will not listen.  The immediate threat of legal wrongdoing is more important to her than catching a hypothetical mass murderer.

The FBI arrives at Will’s house to arrest him but he manages to get away and warn Hannibal that they know.  Jack seems to have nothing left to lose so he heads over to have his grand fight with Hannibal and the cannibal is waiting for him.

A lot happens in the last bits of the episode after the fight.  Jack pretty much loses and seals himself in the wine closet while bleeding.  Alana Bloom shows up just in time to see Hannibal throwing himself at the door trying to get to Jack.  Hannibal offers Alana the chance to walk away even though she has a gun on him.  But then surprise, Hannibal took all of her bullets… when exactly?  I thought they stopped sleeping together a few episodes ago. 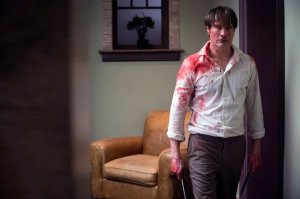 Anyway Alana runs away and locks herself in a room upstairs and then something unexpected happens.  Abigail Hobbs appears.  Abigail then proceeds to push Alana out the window because Hannibal told her too.

I am not surprised that Abigail Hobbs is still alive.  I thought this might happen a while back.  However I did not expect it to happen like this.  Will Graham arrives to find Alana on the ground still alive but badly hurt.  Will does not get far before he is confronted by Abigail.  Hannibal claims he was going to surprise Will with her and they would all be able to run away together.  But its too late for that as Hannibal cuts open Will’s stomach.  Hannibal then proceeds to stab Abigail in the neck to punish Will for betraying him.  It seems that Hannibal had genuine affection for Will and is truly wounded that he did not return it.  But even if Will is not able to stop Hannibal he has succeeded in having an impact on him.  Hannibal may get away but Will was able to get close to enough to break his heart.  Hannibal finally walks away into the rainy night leaving everyone on the floor bleeding in his house.

Now if the show goes by the book lore than all of these character should survive, except maybe Alana Bloom I am not sure about her.  Also Mads Mikkelsen has so far played Hannibal as very aloof and restrained.  It is very different from the gleeful madness Anthony Hopkins brought to the character in the movies.  But in these final encounters I think we get a glimpse of that less reserved version of Hannibal to come.

After the credits there is a brief scene of Hannibal on an airplane drinking champagne with his therapist Gillian Anderson next to him.  So does this mean she was in on everything from the start or did he just swing over and pick her up on his way out of the country?  Whatever the case if she becomes a regular cast member next year I will have to start remembering her character’s name.

Now that Hannibal has ended I think I would like to continue doing recaps of something.  I will have to see what is coming up this summer to watch.