I have never read Miracleman before the current Marvel Comics reprints.  I will be here to give you my impression of them as a first time reader as they continue to be released. 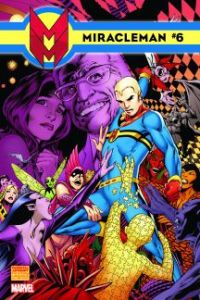 Last issue Dr. Gargunza kidnapped Miracleman’s pregnant wife.  Right at the start of this one Mr. Cream has already tracked down Gargunza so he and Miracleman fly down to South America to get her back.  Meanwhile Gargunza is examining Liz and the baby and gets a shock when the baby seems to look directly at him through the scans.  We also get a little more insight into Mr. Cream in these opening pages.  He is painted as a man so conscious of black racial stereotypes that he seems to fear falling into them as much as he hates them.  And it looks like Cream has other reasons for sticking with Miracleman besides being on the winning side.  Mr. Cream is after the secrets that only Gargunza knows, is this for his own benefit or is he yet working for someone else?

We then get a flashback to 1961 when Project Zarathustra was still active.  Dr. Gargunza and his assistant are monitoring the Miracleman family in their dream world and some strange things start happening.  Miracleman’s subconscious starts to try to wake him and the others up by presenting them with things they will know are not real.  The whole ordeal is kind of intense as Gargunza struggles to keep them asleep.  Again the reference to Miracleman’s power coming from his mind comes up and we see him alter the emblem on his costume even in the dream state.  In the end Gargunza succeeds in getting them to accept the artificial world by convincing them the previous events were just a dream.  But this shows that the project was not absolute and possibly why the decision was made to try to kill the Miracleman family.

We then go back to the present events and Liz asks Dr. Gargunza where he came from and we get his origin story.  He was originally from Vera Cruz but his family fled to Rio due to the violence going on Mexico during the early 1900’s.  After his father died he took care of his mother and it turned out that Gargunza was a genius at an early age and used his skills to take over a crime ring and eventually murder the old boss.  When he had enough money to make his mother comfortable he traveled Europe where he met philosophers and started studying genetic science.  This led him to meeting Hitler and working for the Nazis until he defected to England when he realized the Axis would lose the war.  Gargunza was working for air force intelligence when his mother died and his grief led him to declare that he would never die.  Finally we see that in 1948 something happened that allowed him to pursue this goal.  On the last page we see the strange object that fell from the sky and made Project Zarathustra possible and led to the creation of the Miracleman family.  I guess it is supposed to be some kind of alien ship or life-form.  It kind of reminds me of a weird shaped mushroom.

The backup material in this issue is more black and white pages of the comic and another Marvelman short where he meets the King of Nod in the Land of Nod and has to force him to open the gates so people can sleep again.