It’s been a while since I’ve done one of these – but hey, there’s always more obscurity to draw from!

Boglins were a peripheral part of the ’80s “Gross-Out” toy craze. They weren’t as sick as Garbage Pail Kids, and they certainly weren’t very cheap, but they made a splash for a little while. Boglins were puppets. Big, foamy puppets of goblin-esque mutants (“Nilbog is goblin backwards!”), with an ad campaign that included lots and lots of slime. And then they eventually had variant lines – bigger Boglins, smaller Boglins, slime Boglins… and Mini-Boglins!

Clearly made under the “Hey, MUSCLEs sold well” banner, these guys were really only available in the UK, which is why they are comparatively obscure. The rundown is pretty simple – there were a bunch of Mini Boglins organized into “tribes” based on style, theme, or activity, with a sort-of game that never got statted. Seriously, the tribes had a “Chief,” “Spy,” “Scout,” “Messenger,” and four “peons,” but as far as I can tell the actual game rules and stats are really hard to find. 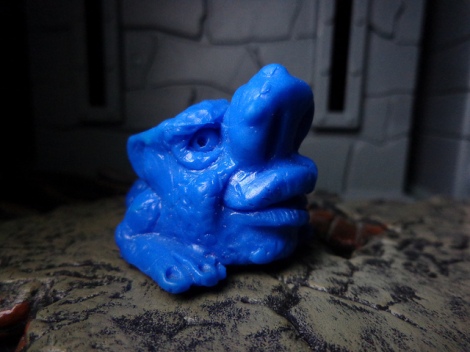 The tribes were also fairly simple, and mostly self-explanatory. You had the Rude Dudes (Boglins making rude gestures), the Greedies (eating), Jokers (Later called the Perilous Pranksters – Boglins playing “pranks,” which oddly included suicide), Clumsies (injuring themselves), Freaks (deformed monsters), Army Guys (uniforms and weapons), Disgustings (mutated or mutilating themselves), Medievals (medieval theme), Prehistorics (prehistoric theme), Samurai (samurai theme), Rare Dudes (a bunch of random boglins from other tribes), Cool Dudes (slightly saller cereal preiums, some of which were based on other minis), and Slime (a few special premiums that came with slime). And they varied, whether it was the oddly innocuous Samurai Boglins (who were rare!):

Or the Medieval crew:

Or that one guy spilling a bucket on himself: 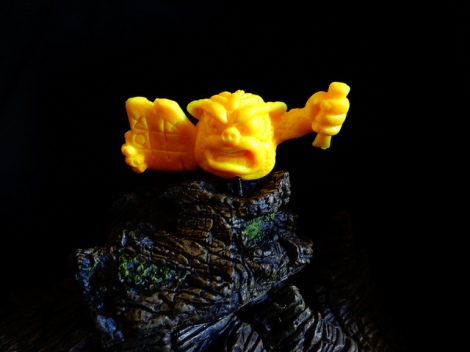 Mini Boglins kind of did… well, everything. A few sculpts were retired or replaced – there were at least two different guys with arrows in their heads – and the colors in which they were released got swapped around a lot, but generally you knew what to expect. A Mini Boglin was about as tall as a MUSCLE but a lot thicker and made of solid rubber, with kind of a “tadpole” shape. The Cool Dudes were decidedly smaller, but not disappointingly so.

Overall, they weren’t really paragons of excellent sculpting. Although some were really well-done (like this mace guy)…

…Overall, most looked pretty bad. Little artifacts of the sculpting process can be found everywhere on them – small indentations where the sculptor pressed too hard, little shortcuts, uneven proportions, and even a few fingerprints! Not enogh to frame a guy or anything, but you can spot the if you know where to look (usually on a Mini Boglin’s back, where the sculptor pinched the clay a little). The prints are rare, but you can still see some cheapness with any of the little guys.

And then there is Poig, one of the Jokers. His “practical joke” easily makes him The Most Inappropriate Toy Ever: 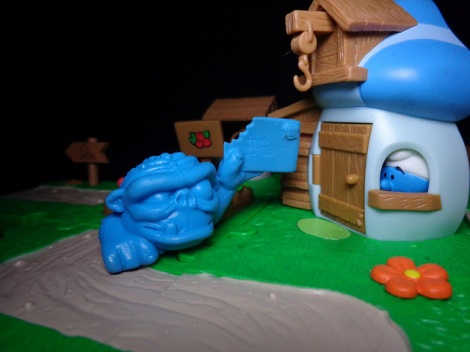 Well… on to the photos! There are many, many more than you see here – and even though these guys are cheap, you’ve just got to love them somehow! 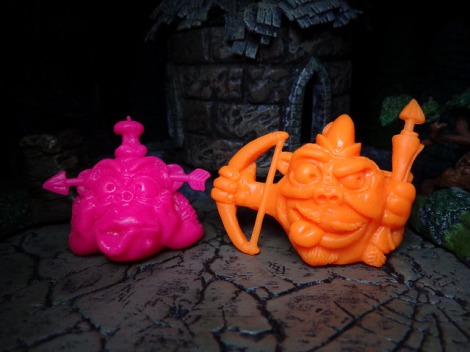 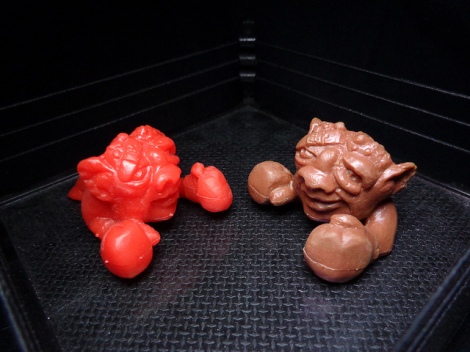 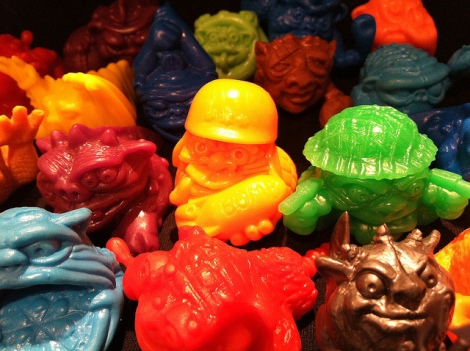 3 responses to “Life In Plastic: Obscure Toylines You Should Care About: Mini-Boglins”