There is a new Captain America at Marvel Comics. 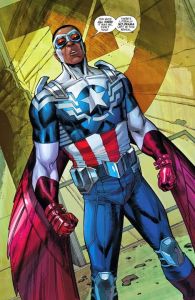 It wasn’t that funny but whatever.

I just want to say that I am completely on board with Sam Wilson as the new Captain America.  However there are some things in the story that got him there that are still bugging me but I will get to those later in this article.

The first issue has Sam fighting Hydra and just all around being awesome.  Sam is working with the current Nomad (Ian Zola, more on him later) who infiltrated the Hydra base and discovered them experimenting on some kid they want to use as a weapon.  In their rescue attempt they get teleported to a room full of Hydra related villains led by Baron Zemo.  In issue #2 they learn that the kid they rescued is actually loyal to Hydra, he is also an Inhuman with blood that can render regular human sterile.  So Baron Zemo plans to use this kids blood to sterilize anyone not loyal to Hydra.  Sam escapes but Ian gets captured.  Sam gets chased by Crossbones and the fight is not going well for him, but then a mysterious super villain rescues him.  And then for a moment Sam is kind of a dick about it until the villain reveals herself to be Misty Knight undercover.  She tells Sam that Hydra has apparently infiltrated every super team.  I’m guessing this is going to lead into the recently announced Age of Hydra event.  And finally at the end of the issue Baron Zemo kills Nomad.  I guess Marvel can add him to the list of recently introduced characters that they then pointlessly killed off.

Before I get into other subjects I also want to mention Captain America and the Mighty Averngers #1.  It is the first issue of a new series but it is also an AXIS event tie in and it sucks.  Anyone interested in reading more about the new Captain America are going to see him acting completely out of character and being a violent bully.  Marvel should have let the first issue be the first issue and not forced it to tie into AXIS.  In fact there are several series that I normally read that I am dropping until AXIS is over.

Now there is someone else I need to talk about related to how Sam Wilson became the all new Captain America.  Her name is Jet Zola. 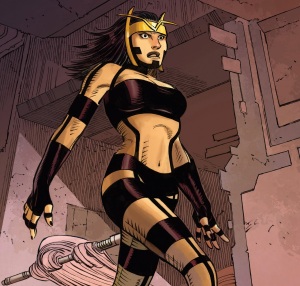 The story that led to Steve Rogers losing his powers and to Sam Wilson becoming Captain America is a long and convoluted one and Jet Zola was a big part of it along with the rest of her family.  She is the daughter of villain Arnim Zola who at the time was ruling over Dimension Z.  Steve got trapped their and kidnapped Zola’s son Ian and raised him to be a good guy, for some reason he failed to do the same for Ian’s older sister Jet.  Anyway time passes differently in Dimension Z so Ian grew into a little boy and Jet grew into an adult.  Then Steve thought Ian was dead but he later turned out to be alive.  And even thought Jet was raised by Arnim Zola she still had a conscience and Steve convinced her to turn good.  Later Sharon Carter showed up and somehow Steve Rogers and Jet Zola escaped Dimension Z and returned to the regular Marvel Universe but Sharon and Ian did not.  So Steve lost his girlfriend and his surrogate son.  Jet continued working on being good and even had a relationship of sorts with Sam Wilson when he was still the Falcon.  At some point Steve Rogers had the super soldier serum sucked out of him and started to turn into an old man.  And then Sharon and Ian turned out to still be alive but the time difference in Dimension Z meant that Sharon was now an old woman and Ian was the same age as his sister.  There was a big fight with Arnim Zola and Sam Wilson almost heroically sacrificed himself to save the day but he survived.  So while Sam was recovering out of nowhere Sharon Carter accuses Jet of being a traitor just because she was raised by Arnim Zola even though Sharon and everyone else knows she turned against her father.  And then for some reason this causes Jet to go running back to her dad.  The whole thing is total bullshit.  I am very disappointed in Sharon Carter here and in Marvel for allowing this character to display this kind of bigotry.  Yes as far as I am concerned the belief that if a parent is a bad person then their kids will be bad people is just another kind of bigotry and it is one that comics books are guilty of a lot and this instance really got to me.  And I have to ask why Sharon did not accuse Ian of being a traitor?  I guess Marvel also wants to send the message that boys are to be cherished while girls are expendable.  I am disappointed that Steve did not call out Sharon on this bullshit.  Instead he just stood their and asked Jet to surrender so they could sort things out.  Keep in mind this was after she had already been chained up and interrogated by SHIELD when she first arrived on Earth and then eventually cleared.  I really hope that at some point Sam Wilson talks to Sharon and Steve and asks them what the hell happened to Jet and they have to explain that they had a powerful woman on their side and then drove her away with their blind intolerance.