Dynamite Entertainment has been making Red Sonja comics books for ten years now so they released a special #100 issue. 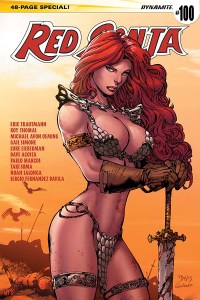 In it we see Red Sonja go on a few different adventures by several different writers and artists.  She fights a monster made of spiders, a giant brain blob monster, an armored boar man, she meets an old warrior not unlike herself, and finally she gets three wishes from a wizard with a magic feather.

I think my favorite was the brain blob monster.  Red Sonja arrives at a strange tower and encounters a warrior obsessed with getting inside.  Suddenly a beautiful naked woman appears in the window and lets down her long hair so the guy can climb up to her.  Yes its a Hyborian Age take on Rapunzel and it soon takes on the kind of twist you should expect from that world.  As soon as the warrior has climbed up into the window Red Sonja notices there is something weird about all of this.  She then hears screams and makes her way up.  Of course it turns out the naked woman was just some kind of shape shifting lure used by a giant brain blob monster with hair tendrils.  The brain blob absorbs the warrior like an amoeba.  For a moment it looks like Sonja will get absorbed too but then for some reason the brain blob spits her out.  While its unfortunate someone was eaten alive, Sonja is not the type to sit around mourning and she takes the warriors horse and rides off to other things.

In another story Red Sonja meets Amena the Man-Crusher.  Amena is a warrior like Sonja but she has been at it a lot longer.  Some marauders left her for dead and Sonja tends to the old warrior in her final moments.  She warns Sonja not to fear regret because it is the cost of freedom.  I think this is a really good sentiment.  We hear talk all the time of not living with regret, but the only way to not have regrets it to a live a life where you never have a choice.  Amena has many regrets but because she has them she knows she has always had a choice and lived a free life.  When you are free you have a choice and when you have a choice you will make mistakes and you will regret some of them but that is okay.

The last story with Red Sonja getting three wishes was also pretty good.  Sonja first wishes for a jug of wine that never runs out, then a really nice sailing ship, and we don’t see what her third wish was right away.  Also right after the third wish she destroys the magic wish granting feather to make sure no one can control such power.  It turns out her final wish was to speak with the spirit of her father.  While his is glad she grew up to be strong he does wish that she would move on with her life, as he sees it in many ways Sonja is still trying to avenge his death even though the men responsible for killing her father have been dead a long time.  But Sonja isn’t about to let go of her father’s memory.  She is who she is and she had done well.  And that is one of the great things about the character and why she endures.  Red Sonja is not really chasing happiness or wealth or comfort.  She is at peace with who she is so she just keeps on going and being herself.