Saturday was a pretty good day for C2E2.  I went to more great panels and took many more pictures.  Plus there was the cosplay contest. 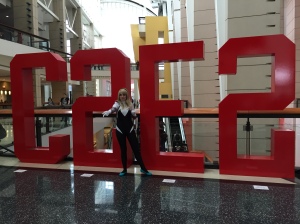 The first thing I went to and one of the highlights of the weekend for me was the Fierce Females of TV panel hosted by Clare Kramer.  The panel featured Jewel Staite of Firefly fame, Neve McIntosh who plays Madame Vastra on Doctor Who, Leah Pipes of The Originals, and Maria Doyle Kennedy from Orphan Black.  Right away they got to talking about the word fierce and what it meant to them.  Jewel Staite said it as a scary word and this led to them talking about how many words used to describe women can be double edged swords.  Yes calling a woman fierce can be empowering but in a different context words like it can also be used to tear her down.  And of course there are double standards in how men and women are described.  A women who is hard to work with can be called a bitchy diva but a man who behaves the same way gets called a perfectionist.  At one point Joss Whedon was mentioned and how he helped kick off a new era of roles for women on television.  While it is good when men with influence champion the cause for women they still need more women writing and producing for themselves and each other.  All of the panelists were actors so they got to talking about acting roles for women.  Maria Doyle Kennedy who has been at it longer than anyone else brought up that when women are younger they tend to get offered more roles that frame them as sex objects and then when you get to a certain age you start to get offered more roles as a maternal figure.  Jewel Staite said that its up to you to accept or reject what gets offered and that its okay to say no to roles you don’t want.  Jewel Staite and Clare Kramer both talked about how even today they encounter men who try to mansplain to them how business works even though they have both been in the business since they were kids.  There were a lot of other subjects and interesting anecdotes that came up but I have a lot of other events to talk about.  Overall it was a very enjoyable panel and they left us with advice anyone can use, always build yourself up, never tear yourself down.

Not long after that I tried to go to the Kick-ass Women of S.HI.E.L.D. panel featuring Hayley Atwell and Ming-na Wen.  However I was not able to get to it.  In fact it looked like about half the people waiting in line were not able to get in.  It seems they were not clearing the rooms after each panel so potentially someone could just sit in the room all day for each panel.  I think this was a huge mistake on the part of the C2E2 show runners.

After that I went to the #YesAllTrolls panel about online harassment.  There has been far too much harassment going around different parts of the nerd community recently and it needs to be talked about.  The panelists mentioned that the more the kind of extreme harassment happening goes on the more mainstream coverage it gets and the more likely the things harassers are doing will be made illegal.  And we learned from one of the panelists that if you harass a government employee you will get a visit from a federal agent.  In today’s climate not feeding the trolls it not enough.  There are ways to protect yourself and your livelihood which is necessary when law enforcement refuse to take an active role.  But whatever happens life does eventually go on.

The last regular panel I attended was the Marry Do Kill panel about female stereotypes in comics.  Comics need more options for female characters than the usual tropes they get stuck with.  The panelists suggest voting with your dollars to help change the standards.  If you don’t like how mainstream comics are treating women buy something else to let the publishers know you want something different.  Unfortunately many of the people in charge still think that different does not sell.

I managed to take a lot more pictures on Saturday and here they are. Saturday night was the Crown Championship of Cosplay contest.  This year the contest was judged by cosplayer Ivy Doomkitty, creature designer Neville Page, and costume designer Ann Foley.  Here are some of the pictures I managed to take of the contestants. The contest itself was fine but not as fun as last year.  Last year there was a certain energy to the judges and the whole presentation, this year it all seemed a bit more mechanical.  Anyway the Grand Prize winner was a Groot cosplayer, here he is with the second and third place winners. I will be back soon to talk about Sunday.