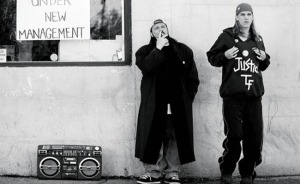 “Clerks” was a highly successful 1994 film, made on a shoestring and loved by millions of people who could identify with the life of a low pad shop worker. It was and still is well loved and it recently made it into Empire’s  best movies of all time list. That’s all well and good however that’s probably where it should have ended. However it hasn’t ended as we now have two new movies (Mallrats 2 and Clerks 3) to further cash in on nostalgia.

It’s not that the other films in the universe were bad at all, I tolerate the view-askewniverse however what I don’t like is Clerks 2. Made years after the original and five years after the end of the view-askewniverse, Clerks 2 had many failings. It should have been ok because Rosario Dawson can fix anything but unfortunately she couldn’t save this soggy wreck. So many in fact that all I will say is two words and those two words are “Donkey Show”. For the love of all that’s holy don’t Google it.

The whole of Kevin Smith’s view-askewniverse has dated awfully. “Chasing Amy” is a bi-phobic dinosaur, “Mallrats” is a mess and “Jay and Silent Bob Strike Back” hasn’t aged too nicely either. Dogma survives by the skin of its teeth and that is only because it has a badass female lead.

One problem I came across writing this after pondering upon said badass female lead was and there is no way to say this apart from this one little blip, Smith can’t write women. He can’t. He can write a mean sexy lamp but good god he can’t write an honest to goodness well rounded female character. I can’t figure out why as “Dogma” is epic but some reason 1999 was the one year Kevin Smith could write a woman.

We could also go on to say something about homophobia but I don’t have the mental courage or fortitude for that argument right now. I mean he seems to be an ally but once again his writing doesn’t portray that. Especially as Jay is supposed to be Bi but once again I’m not in the mood to write down how badly that goes down.

In fact “Jay and Silent Bob” themselves may just be the biggest problem for it. The problem with a lovable stoner/buddy duo is this, the genre has moved on. To put in some sort of perspective lets look at the recent film “22 Jump street” a film that knows it’s a sequel, the characters know it’s a sequel yet its still funny. That joke doesn’t get stale once. Way back in 2001, “Jack and Silent Bob Strike back” attempted a similar thing. It acknowledged the ridiculousness of its own plot, it laughed at everything. The only problem is I’m not sure if everyone laughed with them. Actually that’s too broad the main problem was nobody laughed at all.

Jay and Silent Bob are characters firmly rooted in the 90’s. It’s where they belong. Much like Bill and Ted are firmly stuck in the 80’s and rightly so. Even though the second one was released in 1991, Bogus Journey still feels firmly stuck in the 80’s and that’s how they work so well to this day. Bill and Ted found the magic formula for not ageing like many of the buddy comedies do. Jay and Silent Bob were not so lucky, they aren’t time locked like Bill and Ted and time has moved on.

Them coming back should definitely be worrying if we have already seen last years flop “Dumb and Dumber To”. Harry and Lloyd simply don’t work in a contemporary setting and my fear is Jay and Silent Bob aren’t going to work either.

Yes they aren’t being brought as far forward as Harry and Lloyd were but it’s still 9 years since their last live-action appearance. That is a very long time to be kept away from the public eye from, yes there had a cartoon movie but that was only DVD and limited release. Be honest with yourselves how many of you actually saw the cartoon movie? I mean really, not just the trailer but actually saw it? Exactly.

That’s just Jay and Silent Bob though and the View Askewniverse isn’t just made of those two. Dante and Randall are two integral parts that may have aged better than their silly drug addled counterparts. Yes there are going to be a few changes but in the end, shops are still shops. I don’t think you could mess that up too badly, whether it will be or not remains to be seen. After it comes out I may end up eating humble pie but the thing is I truly doubt it.

I guess this all comes down to personal opinion and a quick look at other attempts at a similar idea. As I said earlier “Dumb and Dumber To” is a commercial flop that failed to make even the most die-hard Harry and Lloyd fans even crack a smile let alone wee themselves laughing as the original did.

Maybe it’s time to accept that the 90’s are over. Yes they are ebbing their way into fashion but they just might not be the right comedic strip to mine anymore. I think the thing is Clerks was good but the moment has passed. The genre has sailed off from these shores and I only wish it had left Jay, Silent Bob and the others left behind.