Yes I am still behind on these Hannibal recaps but I am catching up.  This time we talk about the episode that begins the story from the Red Dragon book.

The episode opens with one of the shows signature dialogue free stylized montages of Francis Dolarhyde becoming the Red Dragon.  He buys false teeth, does some freaky looking stretches and exercises, obsesses over a print of William Blake’s “The Great Red Dragon and the Woman Clothed with the Sun”, and gets his signature tattoo on his back.

We then see that it is three years later and we catch up with the rest of the cast. 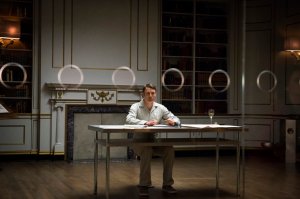 Hannibal Lecter avoided the death penalty with an insanity defense and has spent the last three years in a mental hospital run by Alana Bloom.  It seems everyone has benefited from Hannibal’s incarceration.  Alana is still with Margot Verger and is now the mother of the heir to the Verger fortune.  Frederick Chilton wrote a book about Hannibal that earned him some acclaim.  While Hannibal may be in a cage he is still allowed some nice furnishings.  He even gets to prepare a meal every once in a while and have guests to dine with.  While they are sharing a desert that Hannibal made Chilton brings up the Tooth Fairy murders.  Chilton also talks about it to Alana thinking that Hannibal may be inspired to become active again.  Alana is more concerned with something Hannibal recently wrote for a medical journal that could shine light on the various lies everyone has told surrounding Lecter’s case. 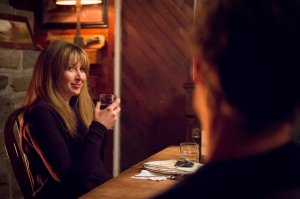 Meanwhile Will Graham now lives in a cabin in the woods with his new wife Molly and stepson Walter.  He gets a visit from Jack Crawford who is looking for help on the tooth fairy case.  At first Will rejects the idea however Molly understands that this is not something Will can just ignore.  Plus Will received a letter from Hannibal and a newspaper clipping about the case.  Hannibal actually warns Will not to go with Jack but that seems like a bit of reverse psychology on his part.  Of course Will does visit the crime scene and does one of his profiler meditations we have not seen for a long time.  Will reenacts the murder of the mother and father and their two boys in his mind.  The killer poses the victims after killing them and proceeds to bite the female victims before putting them back in the spots where they died.  Before the episode ends Will determines that in order to solve the case he will need to visit Hannibal.