Another recap closer to being caught up.  In this episode Hannibal and Will reunite after three years of being apart.  Hannibal seems to want to pick up where they left of with their friendship but Will does not and refuses to call him anything but Dr. Lecter.  Hannibal agrees to look at the case file and determines that the Tooth Fairy could be disfigured or believe that he is disfigured.  Will also catches up with Alana Bloom who does not like him reconnecting with Hannibal.  Later Alana visits Hannibal and reminds him that all of his privileges can be taken away.  Hannibal may be caged but Alana has so far allowed him to keep his dignity.  Normally Alana would not poke the bear that is Hannibal Lecter but technically Will and Jack have already been poking so she may as well take the chance and try to keep Hannibal on his best behavior.

HANNIBAL — “…and the Woman Clothed with the Sun” Episode 309 — Pictured: (l-r) Hugh Dancy as Will Graham, Lara Jean Chorostecki as Freddie Lounds — (Photo by: Ian Watson/NBC)

Will goes back to look at one of the crime scenes and there he runs into Freddy Lounds.  It seems she also benefited from Hannibal’s capture.  She was able to come out of hiding and write some inflammatory articles about Will and Hannibal.  At first Will wants nothing to do with her but Freddy reminds him that some serial killers love to hear about themselves.  An article is written and the killer does indeed add it to the book he is making about himself and Hannibal.

Later the red dragon also visits Reba, a blind woman who works developing sensitive types of film in a special dark room at the place they work.  He even gives Reba a ride home and has a rather tense encounter at her home.  She seems to recognize some of his psychological issues and even he can’t decide if he is angered or touched by that.

This episode also has several flashbacks. 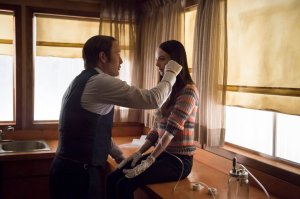 HANNIBAL — “…and the Woman Clothed with the Sun” Episode 309 — (Photo by: Brooke Palmer/NBC)

We get to finally see exactly how Hannibal faked Abigail Hobbs death and that she was there with him on the night of his battle with Jack Crawford in the kitchen.  Hannibal grew close to Abigail in that time and may be having some regrets about killing her.

Jack Crawford pays Hannibal a visit and reveals that he knew about the letter Hannibal wrote to Will.  Jack made sure the letter reached Will in order to help bring him back to work profiling.  It seems that Jack is falling into some of his old patterns of manipulating the people around him.

Finally Hannibal gets a phone call.  The caller claimed to be a lawyer but its actually Francis Dolarhyde who is happy that Hannibal is taking an interest in him.  It looks like Hannibal may have found a new friend.