Hey, remember the last two times I talked about the Masters of the Universe mini-comics?  Well, this year… is the EEEEEEEEEEEEEEND!  We got the last two issues at once, packed in with Laser Power He-Man and Laser Light Skeletor.  And thus… it’s time to give a short summary and a few non-high quality pictures.  After all, I don’t want to step on too many copyright toes, right?  Riiight.  Anyway, it’s time for… THE FALL OF ETERNIA, PARTS TWO AND THREE.

In Summary: Following the destruction of Castle Grayskull, the Unnamed One takes control of all the bad guys, and tries to steal the Sword of Power.  Spector volunteers to take Dare, He-Man’s son, back in time where he would be “safe,” and does so (though the way back is unclear).  So, while King He-Man and the other heroes try t fight the bad guys, Dare goes baaaack in time.  Unfortunately, the villains have sent Illumina – a sort-of new character (concept art existed, long story) out to take him down.  Illumina kills The Mighty Spector (something that a lot of NEitlich-hating fans have wanted for so, so very long), but then is turned into a cat by He-Ro (something that angered a lot of EMiliano-loving fans, long story).  He-Ro makes a Harry Dresden-esque quip, and begins training Dare to be a true hero, because the only way he knows to return Dare to his timeline involves making him genuinely heroic and not just a punk kid.  Meanwhile in the future (how is that possible?), the Unnamed One resurrects King Hsss, learns about the Spell of Separation, and then blows Hsss to smithereens before separating all of Eternia into two planets.  TO BE CONTINUED!

In the final issue, the magic good guys (including Teela as the Sorceress) and elderly Evil-Lyn try to undo the Unnamed One’s spell, but cannot, at which point Tug-O-War, a hero of “Cosmic Balance,” saves the day and leaves forever.  Tug… is a geunine joe character.  his design came from a nameless guy in yellow in one of the vintage comics who participated in a tug-of-war game, and some fans jokingly requested a figure of him.  His existence is kind of funny, even if he did come from out of nowhere.  But aaaaanyway… Dare becomes a hero, and rejoin his family ust in time for the Unnamed One to martial all the bad guys and begin the Third Ultimate Battleground.  Everybody fights everybody, Unnamed One calls in tie-dispaced versions of SKeletor, Hsss, Hordak, and Horde Prime, the heroes bring in time-displaced versions of He-Man, She-Ra, He-Ro, and King Grayskull (yes, there are two He-Men on the battlefield at once), and everybody brawls in what would have been a fantastic fight scene if only we got to see it.  Because we don’t.  Orko pretends to challenge the Unnamed One, but really only distracts him so Dare can heroically stab him in the back, killing him and ending his menace (Yeah, I know.  We were promised a fight, we got a sneak attack).  The time-displaced dues vanish, bad guys go away, and Dare and Skeleteen (Remember him?  Skeletor’s son didn’t actually do anything in these comics) square off for their own adventures fighting each other.  The comic ends on a clear And The Adventure Continues note, pointing out that as generations come and go, good and evil will always duke it out.

So, how was it?  Both good and bad – it needed about four times as much comic space, to be honest.  The ideas were there, the art was good, but everything was too compressed.  Still, it was nice getting to see ome of the What-If future scenarios such as Man-At-Arms resurrected as a robot, Castle Grayskullman still alive despite the castl ebeing gone, or even Mo-Larr the Evil Dentist on the battlefield.  Also, Spector died, which people seem to love.  It just needed so much more space, and then maybe everything would seem like it had a point.

The first issue has art done by a different guy, and the second has a couple of things left out – Evil-Lyn was supposed to don a brand-new costume, but the memo got lost, and the big Ultimate Battleground shot has a huge blank space where more characters were meant to be seen.

Anyway, time for the pictures!  These aren’t terribly high-quality, but they are a decent sample of the comic itself:

Here’s our intro, with the Unnamed One making his appearance.

And here’s elderly Evil-Lyn with Skeleteen. 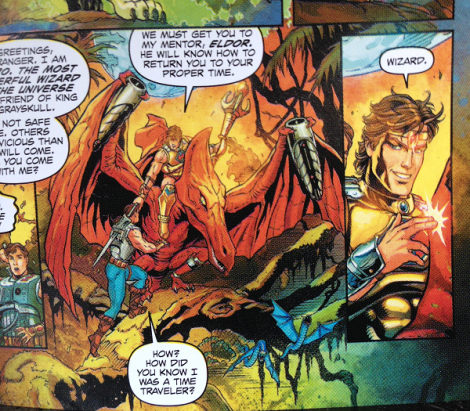 A group shot of the new bad guys, or at least some of them.  Note Skeleteen’s unmasked face – his skull is a mask.

Evil-Lyn regains her youth and power.  She was supposed to wear the really skimpy outfit from one of the He-Ro: Son of He-man pitches, but the artists apparently missed that memo.

And here is Tug-O-War’s honestly kind of funny appearance.

After training to be a hero, Dare stabs the Unnamed One in th eback.  This would have been effective if we had seen Dare try to fight him honestly and fail, and made this into more of a desperation move.  But alas, no.

Here is the big Third Ultimate Battleground shot – that bit of clear sky in the upper-right corner was supposed to be filled with more characters.  Also, can YOU spot Mol-Arr?

And finally – and this one is in good quality – the death of The Mighty Spector!  Complete with an insult to his costume!

3 responses to “Life In Plastic: The Final MOTUC Mini-Comics (Fall of Eternia 2 and 3)”