WE DID IT AMERICA! There’s a Deadpool movie out this week, and apparently it’s good! I don’t know, I haven’t seen it yet!

But yeah, it happened. Thanks to Ryan Reynolds being a big huge nerd, we got a largely comics-accurate interpretation of a fan favorite character, after nearly 11 years of him pushing for it. And hey, you know what? That’s pretty damn cool. You know what’s not cool? How a good deal of people are reacting to Deadpool in general, both the comic character and the movie.

“Oh, I just hate all that dumb lolrandom humor. He’s a shitty, childish character. Why aren’t we getting a Sandman movie? Or something more mature.”

Ok, that there? That shit pisses me off to no end. Despite being one of the most popular characters in Marvel comics today, not a lot of people know too much about him, and therefore tend to base their entire opinion on him off of say, Way’s run on Deadpool, or whatever scans get passed around the internet because “lol Deadpool said a meme”. And yeah, like any character, DP has had shitty interpretations of him. But you know what? He’s so much deeper than that, and that’s what we’re here to talk about. Without further ado: Let’s fake an education in comics.

I mean, chimicangas ARE pretty good

SCENARIO: You just saw Deadpool, and take to the internet to leave a positive review on some movie site, I guess? Look, I don’t know what kind of person you are, maybe you do that, maybe you browse Easy to find artisans rustic burlap pillowcases, idunno man. Anyways, you go to leave your review, and after saying good things (probably, based off the early reviews), you go on with your life. A day later, you notice a response to your review, something along the lines of:

“lol deadpool sucks he’s so stupid and random and dum”

Look, that’s the median between the aggressive stupidity and disrespect that most of those responses would have. Feel free to allow for more or less coherence in your real life.

Now if you were any other kind of person, you would move on with your life, free from the burden of worrying about something somebody disagreeing with you on the internet. But you’re not that kind of person. You’re a nerd, damn it, and that shit infuriates you. So it’s time to flip the hell out. Here we go.

Step One: Backstory, I Guess 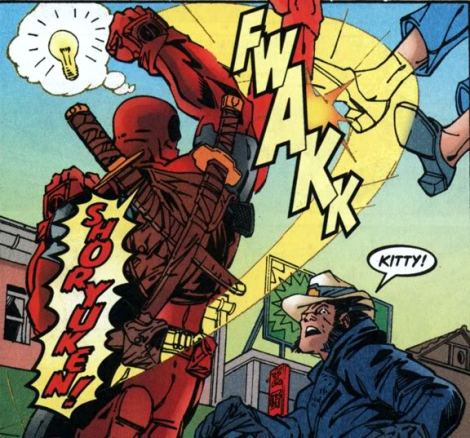 Now, Deadpool, being a 90s Liefield character, has an absurdly convoluted history. It began like any other Weapon X-type character: with a dark, mysterious past that was barely explored. Of course, all was eventually revealed, and in a not-at-all shocking twist, guess what, it was super confusing and contradictory. But that’s ok, because like Wolverine, Deadpool is defined more by his present than his past, or at least, he’s more enjoyable when he is. So, logically, we’re gonna skip over most of that, because I have neither the time nor the patience to explain all the dumb bullshit in Wade Wilson’s life. Instead, we’re gonna talk about something that lies at his core: his struggle with morality.

Deadpool actually started off as a minor villain of sorts, being hired as a mercenary to attack Cable and the New Mutants because of… reasons. I think Cable turned out to be Deadpool’s time travelling employer’s future dad from the past time stream? It was a bit jumbled. To be fair, a lot of stuff involving Cable is kind of jumbled, but that’s not important right now. What is important is that after putting up a decent fight, Deadpool gets his ass utterly beat, pushing him towards the beginning of a realization: maybe, just maaaaaaaybe being a superhero is a better idea than being an amoral mercenary. And thus begins a literally decades long quest to redeem himself and become a hero, no matter how hard that is for Deadpool. True, he’s really ended up as more of an antihero than anything else, but hey, he tries, and I respect that.

Before any of that though, Wade Wilson was your typical mercenary for hire, murdering for money and killing for kicks. Except for a brief stint as a Rikishi in Japan, but that was technically part of a job, so that’s a wash. Eventually, as I’m sure you all know, he contracted cancer, which eventually led to him joining an offshoot of the Weapon X program, which gave him a replication of Wolverine’s healing factor. This, in turn, cured Wade’s cancer, though in doing so, it was continuously producing new cells at an infinite rate, leading to massive, hideous scarring all over his body. Wade was then transferred to a less reputable portion of the program, where Dr. Killebrew experimented on him and his fellow patients.

While in this hellhole, he developed a romantic relationship with Death. Yes, that Death. Crazy and weird of a concept as that is, it was actually pretty awesome, with Deadpool’s perpetual death wish being a desire to reunite himself with the one he loved. Of course, he would move beyond that eventually, marrying the queen of all monsters. No, really.

Along the way he served in various teams of both heroes and villains, and nowadays runs his own mercenary company based off of the popularity of his own image. An appropriately meta occupation for him, as his popularity in the real world has skyrocketed lately.

Look at that goofy-ass Looney Tunes shit! That’s great! At least chuckle worthy. And nary a meme in sight. See, a lot of Deadpool’s best humor comes from clever breakage of the 4th wall. Now, when handled incorrectly, it’s dumb, but it’s mostly done really well. Also, sure, he does reference humor, and every other low form of humor, but you know what? Sometimes that’s all you need. Just like Spidey does, except with like, 400% more murder.

This is… kind of like a dvd I have.

Also, his healing factor makes for great physical comedy. As you can see.

Now granted, meme comedy gets used waaaaay too much with Deadpool (one might even say… Way too much. Ah, that was stupid. No one’ll get that joke anyways, whatever), but it’s usually not too big of a deal as long as the run you’re reading is good. 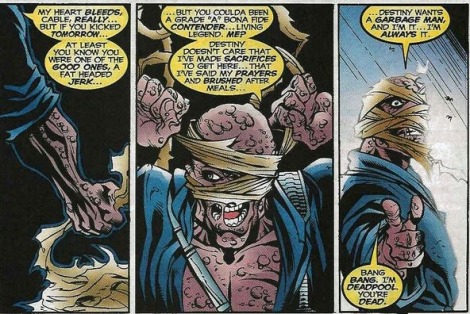 Is… is it weird that I like that way more as a character design than his regular costume?

But as much as Deadpool is a comedic character, almost all of his real value comes from the strong emotion that gets across in his best stories. He is a tragic figure, a man physically and mentally disfigured to a point beyond recognition, seeking only to redeem himself, to be liked and accepted by his fellow heroes. And though he may have a more… relaxed moral code, he will not hesitate to do what’s right, even sacrificing himself (seemingly) at the end of his original series with Cable (which is an absolute MUST READ) in order to save New York. Though he’s as flawed and imperfect as anyone can be, he is, and always will be, a hero through and through.

Who would have thought that a murderous lunatic would be such a great father?

You know what happens immediately after this? Deadpool is stunned that someone would ever call him a hero. It’s a touching moment, as it took, well, real world decades for that to happen.

Deadpool is unexpectedly selfless for a mercenary, willing to do anything and everything to get the job done and save as many people as he can. Usually by killing a shitload of other people, and those people mostly deserve it, but… this is getting away from me. The point is, Deadpool isn’t just some douche in  a suit making internet references. He’s the kind of guy who will mutilate himself and feed those chunks of meat to a dying teammate in order to save their life. He’s the kind of guy who will turn on the X-Men, who he had always wanted to join, just so that his friend Cable can help the world. More importantly than all of that though, he’s a hero. And you know what? He’s one of the best ones there is. Complex, compelling, flawed, and funny. What’s not to love? 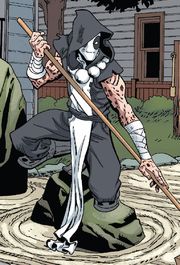 Deadpan doesn’t really lend himself all that well to different versions of the character. Typically, it’s either great, or off character and terrible. But sometimes, sometimes, someone comes along and nails it. So, if you don’t like the real DP, then you have your pick of alternate universe shenaniganizers, or inversions, or god knows what else. For example, take the Deadpool from Deadpool Kills the Marvel Universe. This one is existentially crushed by the realization that, as a comic book character, nothing he does truly matters. So, what else is there to do but murder everyone ever?

If you don’t like your antiheroes quite so dark, you can look over to the very brief section of Axis involving Deadpool, where he is inverted into a largely nonviolent Buddhist named Zenpool. Mostly it’s just for the sweet-ass costume he gets, but he’s a really fun character to see with reversed morality, unlike most of the Axis flips.

Meanwhile, just sticking to Deadpool in different situations in the main continuity, X-Force Deadpool is one of the greatest versions of the character in a long time, showcasing his natural heroic tendencies as well as his twisted sense of humor and violent demeanor with perfect use. Also, he gets a sick redesign.

Don’t like him ugly? That’s fine, he briefly lost his healing abilities and became super handsome. Can’t get enough of him? In Deadpool Corps, there’s 5 of him, kind of. Don’t think he’s angry enough? Check out the Ultimate Universe version. Point is, there’s  a Deadpool for anyone and everyone.

In conclusion, I’m exhaused, I’m hungry, and I have work in the morning, so you can all blow me. Deadpool is a great, emotionally complex character ripe with opportunity for rich storytelling, and you’re a fool if you don’t see that.

If you want to read more about Deadpool, I highly, highly recommend Cable and Deadpool, as well as Deadpool Corps and the Dead Presidents story. Anything else is up to you. Also, most animated versions of him are pretty good, and his game was alright.

Now, if you’ll excuse me, I have to rest up to go see this movie like, 9 times in a row because I could not be more excited about it.

ALSO: Exciting news! Next week’s article marks the beginning of my taking suggestions from people! I’ll be handling a request I got from Reddit, and will be writing based off of suggestions every other week. Cheers!