EDIT: It’s been a while, huh? Well, my life kid of became a massive shitstorm for a couple weeks, but we’re back on schedule now, baby! Next week is another reddit suggestion, but don’t be afraid to leave a suggestion in the comments here as well! If you’re still reading, thanks for sticking around, even through these typically kind of terrible belated articles. I promise next week is gonna be something special.

Or at least, I think that’s how that line goes. It’s been a while since my last annual viewing of Samurai Cop.

Welcome back! As promised, every other week is going to be a suggestion, so this week we’re on my time, and I want to rant about various members of the Suicide Squad because the last trailer made me go back and reread the original run (53 issues in as of right now). Or at least, I’m going to talk about a lot of the ones featured in the movie, because some of those characters just don’t have a lot of history with the Squad. I might take a break from that after a few of them while we all wait for what looks like DC’s take on the Guardians, but don’t you worry your pretty little heads none, I’m saving one of them for the release week for that themed goodness.

But until then, well, here we are. I’ve got a suggestion I’m reeeeeeaaaaaal excited about lined up for next week, thanks to my handy-dandy saved post that some people commented on on reddit, but eventually that’s gonna run out, so hey, feel free to offer your own ones here!

Until then, well… here we go. Let’s fake an education in comics.

SCENARIO: You’re at a convention, and talking to a fellow nerd. The conversation turns, as it always does, from what sex between a Voltron and a Gundam would be like,to comic books. You get to talking about it more, and hey, you both like the same stuff! Mostly. You notice that they’re being kind of cagey about something, and eventually, with some pressing, you get them to say:

“I just hate that there’s no positive Asian representation in comics!”

Suddenly, you understand. You reach out to them, hold them ,comfort them. You are hurt by their plight, you understand that diversity in comics is a serious issue, and a cause worth fighting for.

And then you slap them in their punk-ass mouth, because there are so many great Asian characters in comics are you serious

Amadeus Cho, Tony Chu, Ryan Choi, and, of course Katana, better known as Tatsu Yamashiro, or Tatsu Toro in the current continuity. Of course, any of these characters are great choices, but I already titled the article and did my research, so we’re gonna talk about Katana today and you’re gonna like it.

Note: I am not trying to take away from the issue of diversity in comics, I just want to point out that there are in fact some really great Asian characters beyond, like, Egg Fu. Not everything is horrible all the time, guys.

So, here’s how you’re gonna convincingly sell Katana as an awesome representation of Asian culture in the funny books.

Did you know? Ninjas are, according to historians that may or not be myself, “totally bitchin'”

Before you ask, yes, I’m going to get as many Samurai Cop quotes in as possible. Deal with it.

Anyways, let’s get all that backstory out of the way first. Katana is your typical, average Japanese girl, who was the object of affection for two brothers, and I’ve already covered several cliches without even getting to her expertise in martial arts but that’s fine I guess shut up though. Of course, she chose one brother over the other, causing the one she rejected to spiral into the depths of the criminal underworld. As Katana and her husband were building a family of their own, her spurned lover was rising through the ranks of the Yakuza, coming into possession of a sword. A Japanese sword, if you will. A katana. This blade would come to be known as the Soultaker, because it, you know, takes souls. Literally. It absorbs the souls of whoever it kills into the blade, imprisoning them within for all eternity. It’s pretty metal. Frankly, there’s not really a lot of stuff that the sword does with the souls, but hey, better to have a massive hoard of damned souls in your ancestral death blade than not, right?

As these Japanese revenge stories are wont to do, things take a turn for the worse. The rejected brother showed up at the Casa de Katana, challenged the husbando brother to a duel, and murdered him. Hard. This accidentally started a fire in the home, leading to the untimely death of everyone who wasn’t a main character, including Katana’s children, leaving her with the Soultaker and a burning desire for revenge against the Yakuza. Also her husband’s soul was still alive in the sword, probably making any sex stuff really weird between them.

Step Two: I Have a Neighbor Next Door

I’m not quite sure what’s happening here, but it’s pretty rad. I think. Probably.

Now that’s all fine and good, but it’s a fairly generic “we have a Japanese character” backstory, isn’t it? See, now what makes Katana so much better than the countless myriads of characters whose personalities boil down to “I own a sword and a kimono” is that she is actually, you know, developed as a character beyond that point. Most of the time, or at least when she’s being written by competent writers, she is steeped in Japanese culture while managing to stand out with a personality of her own. Her country and heritage is deeply important to her, but it isn’t solely what defines her. She is a widow and former mother, deeply affected by her loss and pain, making her fiercely protective of anything or anyone she loves. She’s been a member of a ton of different super teams, including the Outsiders, the Suicide Squad, and the Birds of Prey. In the New 52 continuity, she’s only been a part of the Suicide Squad and the BoP, but the New 52 also retconned the Creeper into being a spirit that lives in her sword and is released when it’s broken, so basically who gives a shit. 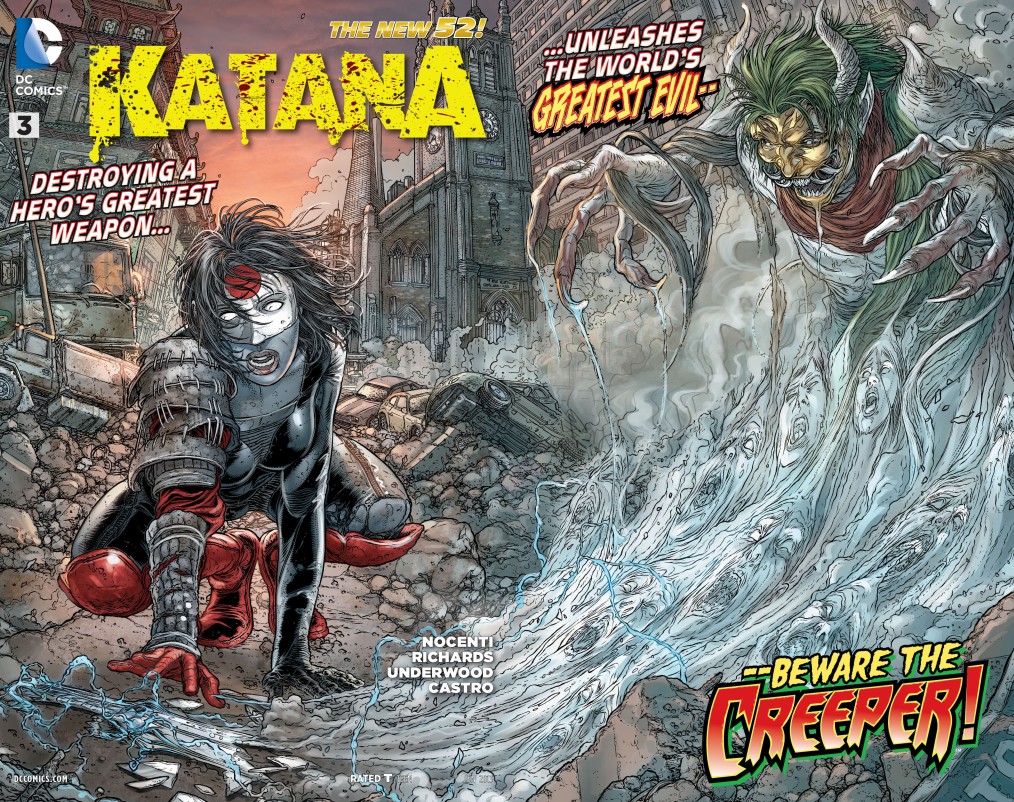 Incidentally, she also manages to have a distinctive, engaging personality, loosening up gradually as she overcomes her loss, while retaining her fierce sense of honor. For example, while a member of the Outsiders, her teammate Halo saves her life at the cost of her own health, leaving Katana bound by a Giri-Ninjo, a Japanese debt of honor. As a result, she spends Halo’s recovery time tending to her as well as seeking an opportunity to return the favor her dear friend gave to her. Kinda like Han and Chewie honestly. So… So Katana is Chewie in that analogy. Huh. I just realized I could technically write one of these articles about a Star Wars character. Well, that’ll come eventually. Moving on.

Step Three: I… I Ran Out of Good Samurai Cop Quotes

Oh yeah, she was also on the JLA in the New 52. Kinda… kinda forgot about that. Just like how DC forgot about Simon Baz.

In addition to her representation in the comics, Katana has actually made it into a surprising amount of outside media, with… varying degrees of success, to say the least. She’s made numerous cartoon appearances,  mostly in Batman related things, such as the outstanding Batman: The Brave and the Bold (A CARTOON I CANNOT RECOMMEND HIGHLY ENOUGH) and the substantially less outstanding Beware the Batman (A CARTOON WHICH I WATCHED EXACTLY THREE TIMES BEFORE I COULDN’T FORCE MYSELF TO KEEP GOING), although both versions took her in differing directions from her comic appearance. BatB, for instance, showed her as a schoolgirl, as well as de-aging the rest of the Outsiders. She also had a vow of silence, which she eventually broke. BtB also de-aged her, but it also put her in a black catsuit and domino mask, which is the least unique design ever, but… that’s kind of all I had on that show. I think Alfred used plasma tommy guns? It was bad. Professor Pyg was a cheesy villain instead of a nightmarish murder surgeon. But I digress.

She’s also, as I’m sure we all know, appearing in the upcoming Suicide Squad movie! Which looks pretty good and has a shockingly comics faithful outfit for her! And that’s al we know about her character in the film, apart from the fact that her sword has a dope-ass skull effect around it.

Seriously, I don’t even care if the movie ends up sucking, it’ll be worth it for that special effect alone. Like… I wish I could have that trail of damned souls following me at all times. But more importantly, my point with this rambling, inconclusive article is that things aren’t quite so bleak for Asian representation in comics. Sure, the fight isn’t over yet, but we’re getting there, guys.

Well, this one’s over folks. It may not have been great, or incredibly informative, but it needed to be done. But before I close the book on… whatever this is, I’d like to make one final point. Racial representation in comic books is a bit of a minefield to discuss. It’s hard to make any one point without angering at least one group of people, and even more difficult to make a point that everyone will appreciate. But I stand by my opinion that we’ve never been in a better place with this issue. We have Falcon, a black man, as Captain America, we have a black female Captain America in the pages of Spider Gwen, Shang Chi is still super popular and is going to make it into the Iron Fist show, Wong is going to be in the Doctor Strange movie adaptation… we’re on our way, people. And while it’s not solved, the problem is better than ever. So no, we don’t need Iron Fist to be Asian, because frankly, that would change nothing other than his race, as well as adding some… problematic issues about the Asian Marvel hero being a martial artist. No, we don’t need female Thor in the MCU. Things are better. Changing characters for no reason other than to achieve diversity means nothing, it’s a hollow victory. Sure, you’ll get what you wanted, but the character will just be… idunno, the female Thor. the writers won’t be happy about having their character forcibly changed, and oftentimes, the character will just end up as a hollow diversity token, like Human Torch in the most recent Fantastic Four movie, or, god forbid, black Wally West. Yeah, remember that one? He went from a great character to a bizarre racial stereotype of “angry inner city black kid”. Plus his costume is awful.

I guess what I’m really trying to say is, if you want diversity in comics or comic related things, push for new characters. Don’t change established ones unless it makes sense to, like Falcon inheriting the Captain America title, or Jaime Reyes finding the Scarab and becoming Blue Beetle.

Well, I’ll see you guys next week. Please don’t call me racist. Thanks for reading, as always.