Or unholy, if you get technical about it. Anyways, today’s suggestion comes from the absolutely amazing u/Zthe27th, writer of the Xavier Files! If you enjoy what I’m doing, but wish it sounded less like someone who’s read too much Catcher in the Rye AND wish it focused entirely on mutants, go check that shit out! It’s great! You’ll love it! Guaraaaaanteeeeeeeeeeeed

Hellboy is actually a more recent suggestion as opposed to the 30-something I still have left, but I’m giving him a pass today because he’s a character very near and dear to my own heart, and because this is my dumb series of articles, and if you don’t like it, then I’m taking my ball and going home! But seriously, Hellboy’s a great character, and one that I’ve been reading since… geez, I don’t actually remember. My best guess would be that it was around the time my dad decided that I was a mature enough child to handle watching the first HB movie, which led into my devouring of his collection of Hellboy books. And with the end of the entire Mignola-verse looming over us, now’s a better time than ever to talk about arguably the best character outside of the Big Two, and to a lot of fans, the best character PERIOD. Oh, also, obviously, there be spoilers ahead, matey. So, without further ado, let’s fake an education in comics.

The Big Stone Fist of Romance

SCENARIO: Idunno man, I’m just really excited to talk about Hellboy. Uh, maybe someone acts really rude about the fact that the series just ended, and you have to correct them or something? Yeah, that sounds enough like my usual bullshit. Well, let’s go already! 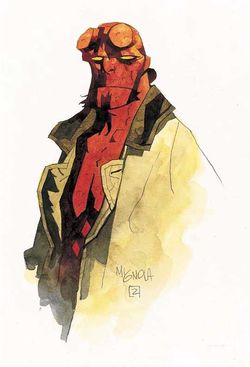 There’s not really a joke here, I just think this is a cool picture.

Hellboy was the child of the demon Azazel and the witch Sarah Hughes, conceived on Walpurgisnacht, a very important night for witches and the name of the final boss of sorts in the anime series Puella Magi Madoka Magica, which is completely unrelated but kind of a neat little fact. He was summoned into our world by the warlock Rasputin on December 23rd, 1944, near the very end of the second World War. He was discovered in a deserted churchyard in England by Professor Trevor Bruttenholm of the BPRD, or the Bureau for Paranormal Research and Defense, who would take him in and, essentially, raise him as his own son. Over the decades, Hellboy (as Trevor named him, kind of dickishly, might I add) would go on to be one of the foremost agents of the BPRD, taking on all manner of supernatural threats all around the world, alongside longtime friends Abe Sapien, an amphibious offshoot of humanity, and Liz Sherman, a pyrokinetic. A lot of them involved Nazis, and even more of them involved ancient demonic bullshit. Hell, most of the time it was both. He fought Nazis, vampires, Nazi vampires, ghosts, werewolves, ghost werewolves, homunculi, demons, Lovecraftian entities… basically, if it went bump in the night and/or hated Jewish people, Hellboy fought it. He’s a superstrong, super durable, flame retardant demon who can speak any language and kick your ass while doing it, so he did pretty okay, generally.

Hellboy would go on to be revealed as (SPOILERSSPOILERSSPOILERS) the living catalyst for the apocalypse, known as Anung un Rama. This was why Rasputin had summoned him to Earth, hoping to use him to usher in the end of days. If you’ve seen the films (which are damned good, incidentally), then you know the general idea: his horns grow back, there’s a flaming crown floating above his head, he uses his stone right hand to do apocalypse things, so on and so forth. For the uninitiated, Hellboy’s horns are so stubby and awesome looking because he regularly files them down as a sort of rejection of the evil inherent in his own nature. It’s kind of like shaving, in a way, but with more symbolism.

Another neat detail is that Hellboy ages… strangely. For example, and padding purposes, let’s start with this example: 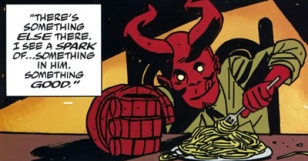 So he looks like a child, let’s say about 8 years old, yeah? Well, he’s only two in that image.  Basically, Hellboy’s body aged  incredibly rapidly up until it took on an adult appearance, leaving him with a mind that was about ten years old in the body of a 30-40 year old demon man. The reason why he didn’t turn into a pruney nightmare is because he basically stopped aging physically as soon as he gained an adult body. Like, at all. Well, as far as we can tell, for all we know he could be aging at such a decelerated rate that no one can even pick up on the physical changes, sort of like Wolverine most of the time. Shit, come to think of it Hellboy is just a slightly classier, less angry Wolverine. 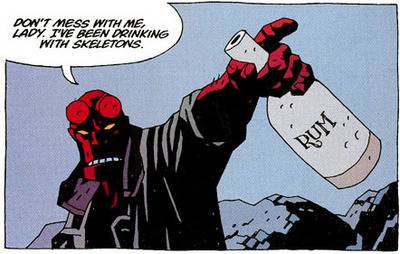 For the most part.

Step Two: Would it Feel Tiny in the Right Hand of Doom? 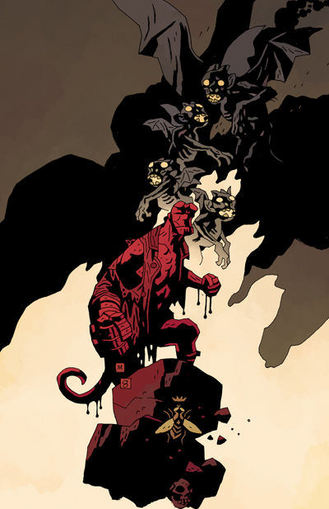 The answer? Yes. Most definitely yes.

So, obviously Big Red here isn’t so keen on the whole “harbinger of the apocalypse” thing. After all, he was raised to be a good person by his adoptive father, and parental guidance is kind of a hard thing to shake most of the time. This has been the cause of a great deal of conflict for Hellboy, with many outside forces either wishing to use him to end the world or attempting to kill him in order to save it. You might recognize this as what people wiser than myself call “kind of a horseshit deal”. Through no fault of his own, Hellboy was thrust into a destiny that was pretty much a lose-lose situation for him. Although, to his immense credit, he was able to repel his own destiny time and time again, until he eventually (KIND OF SPOILERS BUT THEY’RE PRETTY OBVIOUS SPOILERS IN HINDSIGHT) died and went to Hell. Like, forever. Shit, if I’m interpreting the final issue of Hellboy in Hell correctly, he just kind of lives in a big house there now. All things considered, Red did all right.

Now, you might have noticed that I’ve kept the biographical and plot details pretty light here, and there’s a reason for that beyond laziness and self-imposed deadlines. I genuinely don’t want to spoil anything for anyone who may be about to read the Hellboy series beyond anything that I’ve already spoiled, because I think that they’re just that damn important to read. Seriously, just go out and pick up some Hellboy. Main series, self contained one shot, spin off, anything. It’s all good. He’s crossed over with a bunch of characters too if that helps you get into him, from Batman to Starman, to even Ghost, a fairly obscure Dark Horse character with the amazing powers of… being a ghost. That can use guns. Still cool though. 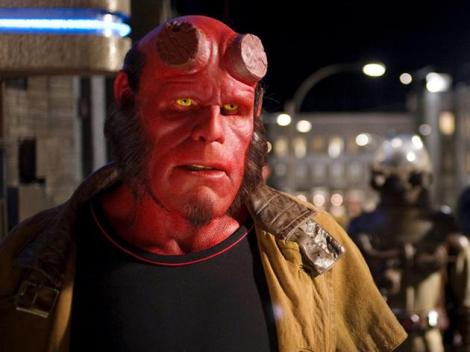 Man, Ron Perlman managed to make a great career out of having a perfectly square skull.

Hellboy isn’t the first character outside of the Big Two to get a film adaptation by a long shot, but he’s definitely one of the most notable. That’s mostly because of two things: One, his movies are actually, you know, pretty fucking good, and Two, they’re so incredibly faithful to the source material. Sure, there’s changes and concessions made, but even then, what comes about still feels like Hellboy. The only other movies like this I can think of are the Rocketeer, and… pretty much just the Rocketeer, actually. The Spirit was pretty bad, The Phantom was really bad, and frankly, the less said about the Green Hornet, the better. Even Watchmen, arguably one of the most impressive adaptations of a niche comic property of all time, failed to fully live up to its potential, and Watchmen is one of the two comics that Zack Snyder actually enjoys. But the Hellboy movies are truly something special. Made by famous Spanish director/lovable ball of grease/cursed object Guillermo Del Toro, both films feel like a labor of love, which makes sense, seeing as how GDT (look, I adore the man and his work, but typing out his name kind of sucks) was a huge fan of the source material and Mike Mignola was also on the crew. Even Ron Perlman, a man who I kind of imagine as a seething ball (or brick, as it were) of black hatred, was a huge fan of the character he portrayed, and has made statements about wishing he could give the series the closing chapter it deserves. Although in all fairness, the man regularly does voiceover work for the Fallout games and loves it, so he’s a pretty huge nerd. Anyways, if you’re not going to read the comics, at least watch the movies. They are worth your time, Hellboy fan or not.

There’s also some pretty stellar animated movies featuring Hellboy if you can track them down, namely, Sword of Storms and Blood and Iron. Again, worth a watch, possibly even more so than the live action films.

On the opposite side of the spectrum, there exists an almost universally panned video game loosely inspired by the films, named Hellboy: The Science of Evil. Playing it is an experience akin to watching someone piss all over the flag of your country. It lets you play as Hellboy, Abe Sapien, Liz Sherman, and even the fantastic semi-comedic character Lobster Johnson (voiced by Bruce Fuckin Campbell, no less), and despite all of this, it plays like absolute dogs hit and makes a lot of weird decisions to go against canon. There was also another game before this one that I can no evidence on save for its name, and a shitty mobile game released in conjunction with the second film. If you’re crazy enough about Hellboy to check them out, be my guest. 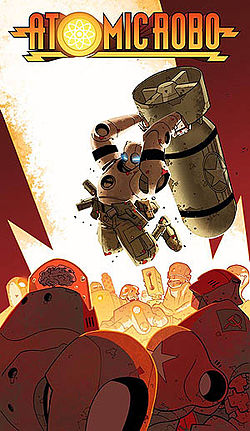 Of course Hellboy would spawn a character similar to himself. That’s just a given.

See, Atomic Robo is basically the all-ages alternative to Hellboy. Not quite a one-to-one copy, but definitely a derivative. A delightful fusion of old school pulp and futuristic pseudoscience, Atomic Robo follows a fairly similar plot structure. Strange, paranormal type being battling Nazis and otherworldly shit across time, lovable cast of misfits, so on and so forth. Obviously it differs significantly after that point, but hey, just a neat talking point. Written by the always awesome Brian Clevinger, you can find them all online for free. Good alternative to Hellboy if you’re feeling cheap and/or misguidedly anti-demon.

That’s all for this time. See you all next week! Oh, and go check out the Xavier Files! Here’s a link, unceremoniously plopped at the end of the article because I am unskilled at pacing!