Why Are There so Many Cool Bug Heroes?

Welcome back folks! Tackling another suggestion from apocoluster, otherwise known as the reason why there’s an NFL Superpro article in this series, this week we’re talking about the very first Blue Beetle! That’s right, we’re going all the way back to his roots this time around, skipping past Jaime Reyes and Ted Kord to get to good ol Daniel Garrett, a man frequently referred to as “literally who?”. But seriously folks, without him, we wouldn’t have some of the best things DC ever made, from Ted Kord and Booster Gold’s everlasting bromance to the lamest character in Watchmen. Truly, Dan has had more influence than almost any non-trinity Golden Age hero, and that’s without even being attached to Marvel or DC.

But of course, like about ninety percent of Golden Age heroes, he was doomed to fade into relative obscurity, with only a wayward name drop ever really reminding people of who he was. Well, that and the rare Booster Gold time shenanigans. So of course, like so many of the characters covered in this series, let’s give him some of the time in the limelight he deserves! Just a side note before we get things started, in the future, if you have legacy characters that you want to see me write about, please specify which iteration of the character you want, like our good friend apocoluster did here. Makes my job just a tiny bit easier, and then there’s no chance of me accidentally covering the wrong character. Without further ado, let’s fake an education in comics!

Come to Think of it, I’m Not Sure Blue Beetles are Real Animals Either.

SCENARIO: Ok, so we all know that a lot of Golden Age material doesn’t quite hold up. From dated writing to art that just doesn’t always stand the test of time, there’s all manner of hurdles in the way of enjoying the golden oldies. But that’s not to say that we should have no appreciation of the classics. From creating the very dawn of superheroes to inspiring some of the greatest comics of the modern age, the impact they’ve had is undeniable. But of course, there’s always going to be people with no appreciation for the classics. So today, that’s what I’m gonna try and give all of you guys. Let’s dive on in, shall we? 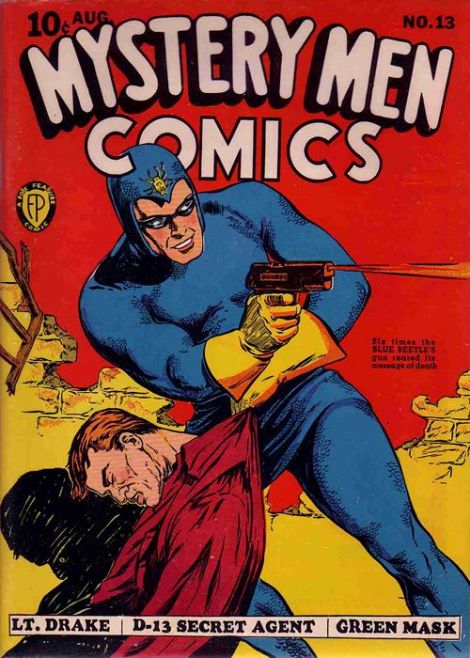 I’m not sure what kind of beetle has scales and a miniskirt. I can think of several with guns though.

Thankfully for my frequently rushed research, the origins of Golden Age characters are elegant in their simplicity. Take Dan, here. All Dan ever really did to get his crime fighting career was go to Egypt and pick up an ancient artifact. On purpose. No fuss, no muss, no radioactive animals or tragic backstory of any kind. Just your average 40s era archaeologist, from the era when having a degree in any academic pursuit meant that you had to have a minor in cold cocking Nazis. Truly, men were men, and if staring at old stag magazine covers for hours has taught me anything, women were either Nazi spies in tiny shirts or held hostage in suspiciously bondage themed deathtraps.

But anyways, Dan Garrett was on a dig in Egypt a couple weeks before the outbreak of World War II, searching for the lost tomb of a pharaoh named Kha-Ef-Re, who was said to have held an artifact shaped like a blue scarab, granting him incredible powers and dominion over most of Egypt. Over the centuries, none had ever managed to obtain the relic from his ancient tomb, due to traps and curses aplenty. Until one day, Dan Garrett just kinda walked in and got the artifact no problem. I guess the traps and curses just ran out. Naturally, being an archaeologist in the Forties, Dan was obligated to use the amazing powers of the Scarab to fight crime, becoming the Blue Beetle.

At the original time of publication, Blue Beetle was a part of a large group of characters known as “The Mystery Men”, pulp heroes fighting both crime and the war for Americans everywhere. As an imprint of Fox Feature Syndicate, things were going… well, they were going okay. The character wasn’t an explosive success, but he wasn’t doing incredibly either, in fact, he was pretty middle of the road. Of course, this might have had something to do with his, shall we say, less than inspired original origin. You see, before he was ever an archaeologist with magic powers, he was simply a patrolman who was fed up with crime, donning a bulletproof outfit to clean up the streets. Then, to gain a bit more popularity as actual superheroes were becoming more popular, he started using a supplement named Vitamin 2X to temporarily increase his physical attributes, and then gained flight and X-ray vision and all kinds of other bullshit for little to no reason. Basically, he snowballed in terms of power on a level comparable to Silver Age Superman, and of course, like with every other absurdly powered hero, his popularity plummeted, leading to the character slowly drifting into darker and grittier fare, starring in noir stories for a while until some goober decided that the best use for the guy would be for him to host a true crime serial. Obviously, this didn’t go super well, and the rights to the character were sold off to Charlton comics, and that’s where the legacy of the Blue Beetle truly begins. 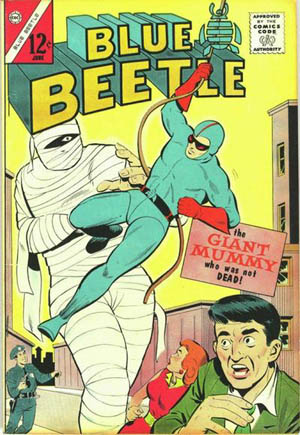 I mean, I would assume that by definition a giant mummy walking around would not be dead.

Dan was finally given the origin that most people know when he wound up at Charlton, and he gained a fair deal of popularity. At least, more than he had when he was the host for a true crime serial. The only real difference in origin between this version of the character’s origin and his now official DC one is that the scarab was used previously to imprison an evil pharaoh and was purely magical, instead of the techno-organic alien hardware that we all know and love today.

Unfortunately for Charlton, however, his popularity wasn’t quite enough to keep him going for more than a couple years, and eventually he vanished once again, being replaced by everyone’s favorite Blue Beetle, Ted Kord. Eventually, around the 80s, DC comics gained a good deal of interest in several of Charlton’s characters, and was about to purchase the rights for them in order to fold them into the DCU. However, it looked like the deal may not go through, and in an act of desperation, DC editorial got professional curmudgeon/avatar of the Snake God Alan Moore to create knockoffs of all of the characters. And so, looking at the assembled likes of Captain Atom, Nightshade, Thunderbolt, Peacemaker, The Question, and good ol Ted Kord, Moore birthed the original designs for the Watchmen. Of course, the deal actually went through and there was essentially no need for Moore’s characters, and DC was absolutely not going to allow Moore to put their freshly purchased characters through his proverbial wringer, so a compromise was reached and one of the greatest comics of all time was written, with a character indirectly inspired by Dan Garrett. Yes, that’s right, universal “least favorite” of the Watchmen, Nite Owl, was based off Ted Kord, who was in turn inspired by Dan Garrett. I mean, sure, Dan had basically no bearing on anything in Watchmen, but if he had never existed we never would have had Ted Kord, and Watchmen may have been pretty different,  so that’s neat.

Over at DC, Dan’s days were pretty much relegated to being referenced as Ted’s inspiration, making an appearance in the mid eighties Secret Origins series alongside the retelling of Ted’s origin, as well as being briefly resurrected by the Scarab and fighting Ted for a couple issues. Here it was revealed that the Scarab had some degree of mental hold on Dan, controlling a good deal of his actions. After Ted liberated Dan from the Scarab, however, Dan would die once again, and once more fade into relative obscurity.

Step Three: I Don’t Want to Reuse a Heading Title, but Legacy Fits This Too Well, so Whatever 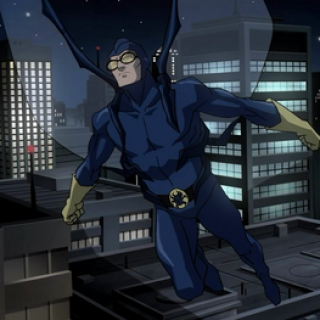 There’s something charming about how dumb he looks, no matter how much you update the art.

Of course, being a legacy character that kicked off one of the most beloved lines of heroes in DC comics, Dan gets referenced plenty these days. In fact, he features pretty heavily in Jaime Reyes’ backstory, as the Scarab that Jaime wears is the updated version of the original Scarab, making the transition from ancient Egyptian magic to alien symbiotic technology. This retcon also means that Dan was using alien powers and never figured it out, which is kind of funny to think about in relation to how up-front about being alien the Scarab is nowadays. He also makes several cameo appearances in the always-amazing Batman: The Brave and the Bold, which features the Blue Beetle line fairly heavily, as well as appearing briefly in Young Justice.

He’s had a bit more of an important reference in Dynamite (a publisher that is basically entirely old school pulp heroes) series Project Superpowers, appearing prominently in some flashbacks, however, due to copyright issues with DC, he is referred to as the Scarab. Basically, they just wanted to pay homage to a Golden Age hero without getting sued.

Beyond that and Watchmen, however, Dan just simply doesn’t really exist these days. I mean, you can create him in the DC spin off of the Scribblenauts games I guess, but that’s about it. Frankly, a character this important deserves a little more, but with how much emphasis the Blue Beetle Rebirth series seems to be putting on legacy, and with Dan’s granddaughter being a recurring member of Jaime’s supporting cast, it seems like maybe he’ll get the respect he deserves. Definitely let him stay dead though.

So, there you have it, a rough history of the very first Blue Beetle. He may not be the most exciting or original character, but his impact on DC is undeniable, so it’s good to at least know his name. Well, with all that under wraps, I’ll see you all next week. Remember, for future reference, if you’re going to suggest a legacy character, please specify which version of the character you want. Otherwise, that’s about it for this week. See you next time!