Comic Book Storytelling is back.  To kick things off we will talk about the final volume of Dirk Manning’s Nightmare World graphic novel series. 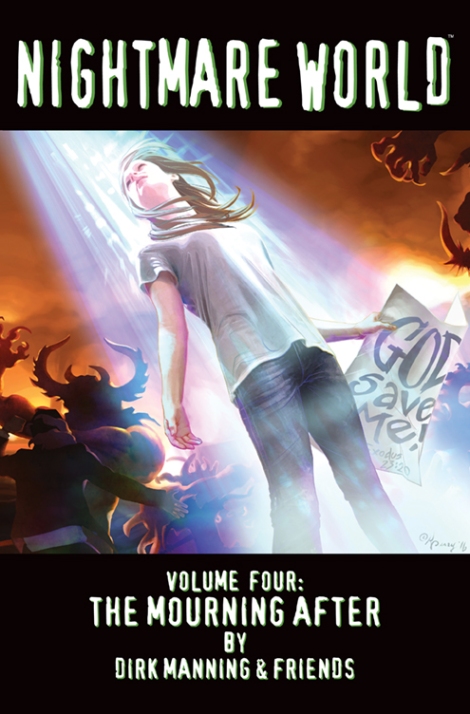 Nightmare World is a horror anthology but all the stories are written by Dirk Manning with a different artist on each one.  The series starts off exploring horror in a lot of different ways and as it goes on the stories that seem random start to become more interconnected leading up to an apocalyptic battle between good and evil.  And then exploring what happens to everyone left on Earth after that battle is over.

I said before that Volume 3 felt like an ending to the series and I still think that.  Volume 4 is like a nice long epilogue that wraps up a lot of loose ends.  In this volume’s stories there are demons, and angels, and even some kaiju, but most of the worst monsters are the human ones.  My personal favorites from these tend to be the more self contained stories so I liked Trust Your Mechanic.  And the story Everyone I Went to Highschool With is Dead was… well you should read it yourself.

Dirk Manning comes to a number of conventions in Chicago and it is always good to see his panels and visit his table (H8 as in hate).  I recommend his work to anyone who likes independent comics and horror.