I thought I would have more to talk about in comic book storytelling this time.  A number of comic books came out but I am waiting for a few titles to reach the end of current story arcs before commenting on them.  So the most prominent thing to talk about now it Avenger No Surrender Part 2. 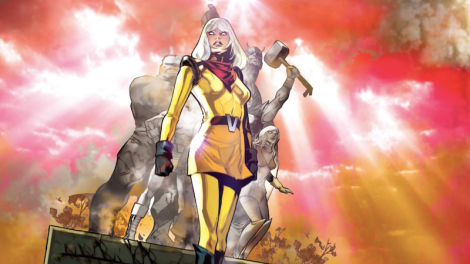 As I suspected last week Voyager is indeed being inserted into history as a long lost founding Avenger.  The reason no one remembers her is because of some time travel shenanigans that also somehow erased her from everyone’s memory until the moment she returned.  Although after reading this issue I wonder if maybe it will turn out that she is really some kind of cosmic time parasite inserting herself into everyone’s memory instead.

Meanwhile the Earth has still been stolen and many Avengers are still frozen in time.  The remaining Avengers trying to figure things out when the Black Order, Thanos team of henchmen, show up and get in a fight with The Lethal Legion, whoever they are.  But then they stop fighting because this is all part of some kind of competition to the death that’s not ready to start yet.

In other news Jarvis the Avengers butler is not completely dead yet just hurt very badly.  And in the final pages the Avengers mansion gets blown up with all of the Avengers inside of it.  So we’ll see how that works out next time.